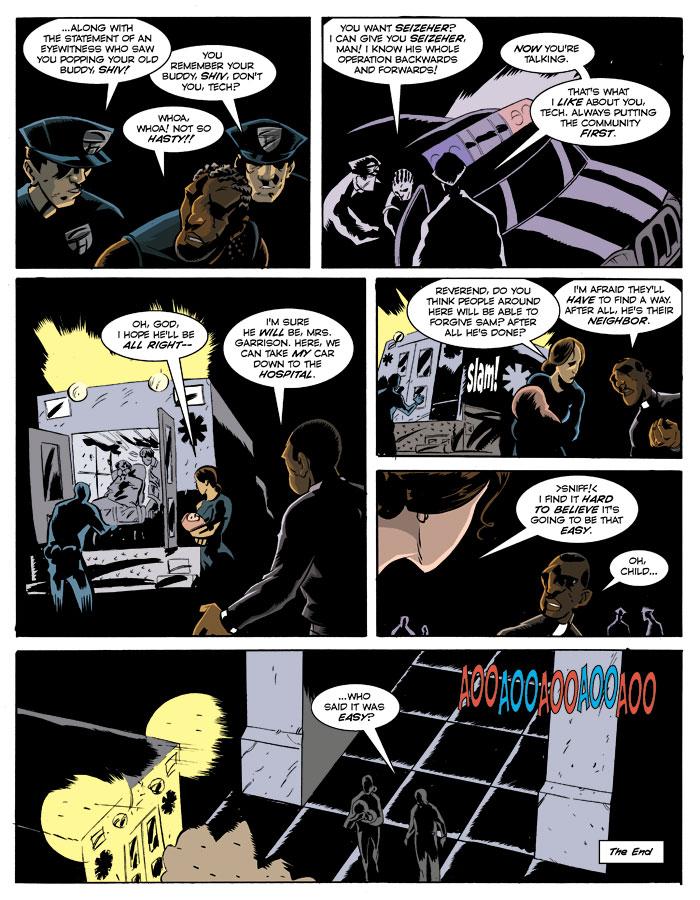 The End? Aww. Great story, as those before me mentioned. It was a real pleasure reading it.

Nice, really nice. You should be proud. An exciting, tense, dramatic story, well drawn and well told. I was amused that the gangster was arrested at the end (he was, after all, still a violent criminal!) Well done!

Brilliant comic. I loved the idea and the art. Absolutely wonderful and certainly makes you think.

Twas very shiny. I liked it.

I know this series has ended a while back, but will we ever see a sequel to the Watchdogs?

Sweet comic. I hadn't read all the way through yet. Very sweet storyline.

Wow, started on page 1 and read it all through, just couldn't stop. I'd see the graphic novel now, and I agree it would make a great movie.

Bravo! Very well done, at the beginning I was thinking to myself that if they truly wanted to provide a positive image to their community then they should've been more ethnically diverse when it came to the Watchdogs, but when it's revealed that Mark himself is a White Supremecist it all made sense. A thoroughly gripping story with fantastic art, will most definitely have to locate the graphic novel.

I loved it from beginning to end. Great job.

I've had this bookmarked for the longest, but never got a chance to read it until today. It was a slow day at work, so I read the whole comic. AMAZING. Great story, Great art. just great all Round.

An excellent morality tale well thought out and executed.

Yup... this is choice. Faved and friended. Well done. Scott out

I enjoyed the writing, very inspiring on it's own. The artwork was quite refreshing, as well as the characters. You guys are great together, like Vegemite and cheese and bread. Even cooler upon that, was the way you posted it as a full comic. Instead of a part-way teaser.

it was interesting, and it did make a good movie. Fight Club, remember? Still, good art and all.

An ending to an interesting if rather simplistic story. It was handled well, considering the sensitive subject area. No one is a saint or a winner. This comic would make a great movie and I would love to see it redone - fleshing it out and adding a little more background to the characters because I enjoyed the story. You know, what made the other the guy become filled with such hate in his heart towards people of color? Surely it is more than just living in a crime ridden neighborhood. And the protagonist, what makes him not fall in with the "haters"? He could have so easily figured crime and struggle for white people = colored people running amok due to self appreciating liberals, and said colored people needing some hard and forced submission.