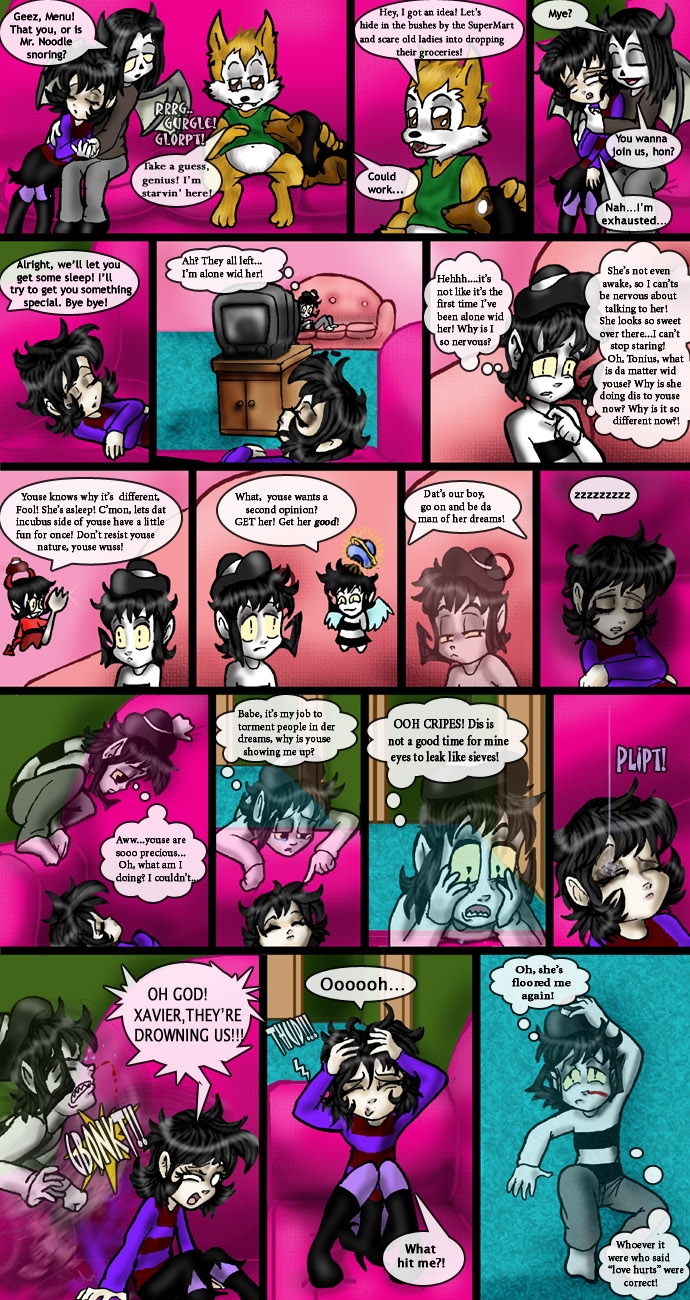 Aw, can I be forgiven because this is not a movie or an animated series? It woulda been lame to not be able to draw Tony in this one!
He's only half transparent for us, if anyone else had been in the scene (awake that is) I woulda had him invisible. But since he's not interacting with anything, it would have sucked (for me) to just have talk balloons to indicate where he was. Woulda made me look lazy to boot.

Anyhow, he wasn't thinking of “taking advantage” of her in the perverse way, he was going to look into her dreams…to make them “better”, that is to say…

O.o the angel is actually agreeing with the devil? LOL

I didn't notice there's a couch actually BEHIND the TV. That's pointless.

Tonius's theme is "Exercise in A Minor" by Apollo 100.

Hehe love the way the devil's hat is on top of the horns and that the angel is agreeing with the devil XD Puns :P Spork! XD Last panel is just oh so true.

Angel with striped shirt :D But they're both brilliant.

Omigod! That is the cutest ever Mye in the second to last panel!

... and I'm assuming her drowning comment is a nightmare from the witch trials back in the day.

Poor tony but at the same time I think Zeno needs her more... I know how that feels it really sucks but makes for an interesting story.

I agree with your choice of "showing" Tony when invisible Amelius. :)

It appears that mye and hexavier have an interesting past.

The Tony Demon's pitchspork made me laugh.

For the record I love how you handled this page Amelius, it would have been kind of lame just to have Tony's word bubble floating around.

Poor Tony, he loves her so much that even his natural alp/incubus instincts are nothing by comparison (and I'm guessing that Mye was having a nightmare about Hex and herself being drowned to death prior to theur return as zombies, yes?)

wow..lol the devil and the angel are both evil

Even if it was dream wise, still, isn't the angel supposta give the HOLY advice? xD

it's funny when teh devil&angel agree ^_^