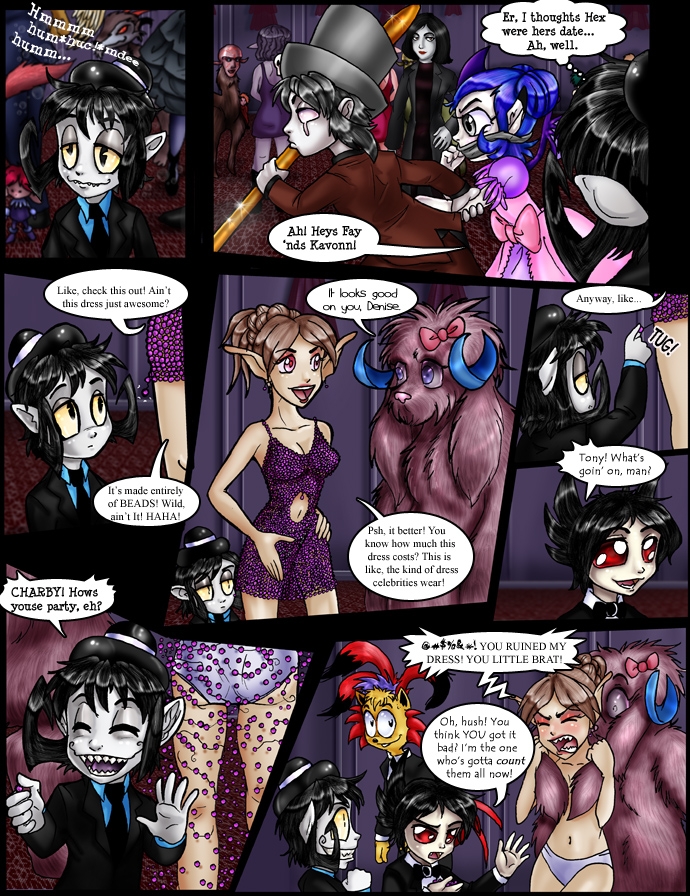 The title is a little play on an alp-related word.
Ever have something made of beads just come apart like that? I was a little inspired by one of my favorite bracelets falling apart on me like that.
And have a little faith guys, I'm not slacking off, I just have something majorly important to do right now and I've had to minimize my work schedule for it. That doesn't mean I've taken a break from it or anything (or need to for that matter) it just means that I don't have as much time to devote to it all at once like I could before. I've been doing it in small increments, which I thoroughly dislike!
Also, I see my expirement with colored lines fell flat, since only 2 people noticed it (or said they noticed) and the only other mentions were that something looked off (because believe it or not I was actually happy with that page for a while)
Ah well, live and learn! I've just got to do better.
I could only squeeze in one guest today (better than none at all like I've sadly been doing) and that is the nice pale lady behind Kavonn and Fay, and she's Danielle from Artdude2002's awesome comicDanielle Dark.

Take care everyone! See you later (or sooner)

PFFT XD Tony looks like a little kid in panels 3,4 and 5 XD Charby's gonna do that not so very long if he weights them again C:

Fay's hair is always awesome. But it's so perfect in this page. In fact, the whole page seems to have a glisten. Really awesome how this turned out.

Heeheehee... this is why giving Vampires foibles is a good thing. Prime time comedy ensues!

Yay for OCD That owned.

Nice job on Fay's hair, here! It shows more of that pearlescent sheen you've mentioned in the past.

Hehe, a neat dress - especially in the last panel :P

I absolutely love the pun in the title XD Alpdrucke, Alp-drunken. Priceless stuff.

I absolutely love the pun in the title XD Alpdrucke, Alp-drucken. Priceless stuff.

Darn you, Charby! Show me, too. I hafta count them, too, all because of you and your constant need to count things. ARG! I need sleep...

YAY TONY! Now do your fans a favor and move those floppy demon ears so we can see the goods! LOL XD! I kid, I kid, (: I never get tired of Charby's inability to resist counting small fallen objects like seeds, marbles, and beads (just like in some vampire myths, its the little touches like that which bring this comic to life)

He did in "seedy side of town" but he doesn't carry it with him all the time, unfortunately for him!

I hate when beaded things fall apart like that; tends to make me unravel, too (.__. ) First panel with drunk Tony is cute!

Why do i Remember Charby having a scale and weighing one, then the rest of them to get a number?

I have no idea, thats a good q! Tony you cute, sick, lil perv!

I have a question. Can Charby ever NOT count things when he see's them fall? Or is it in his vampire nature to automatically count things whether he wants to or not? *grins*

I never got why Charby always has to count beads when they fall...

Ah hahahhahah That's awesome! can't blame you Tonius... i prolly would of done the same! I missed you Amelius!

You'd think that maybe she'd jump behind something instead of using her friends ears to cover herself up, haha.

Youse care too much about voting...~

Whoops, I forgot to vote.