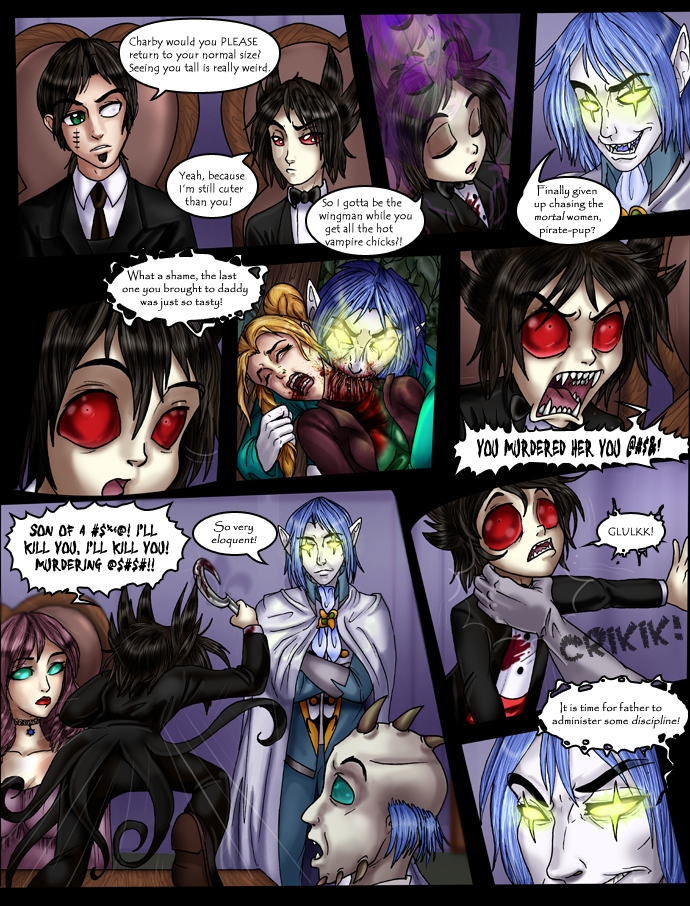 Hey all, sorry for the even longer wait than usual, I'm still feeling under the weather (plus some bad depression last week on top of that) and I actually worked on like 3 other updates, but this one I felt a little more…well, inclined toward, if you get what I'm sayin'.

I think I should take the time here to say again that all comments are welcome that are constructive, they don't always have to be positive but it is appreciated. Of course I have the utmost respect for the opinions of people that have actually read the comic and still feel things a bit lacking. That is why I'm going to address your comment here, Grimgork.
I understand what you mean about the lack of pirates, don't worry there just might be something to do with that later (later as in after this stinkin' party ends!) but the reason this isn't a monster-pirates on a boat comic is because that's just…well, too gimmicky for the story I've got now. Besides, there's already another comic that has vampire pirates on a boat and I don't want to encroach on their territory!
But for some good pirate comics, why not check out Grog, Here There Be Robots or Yarg, all of which should fill that pirateless void!

To be completely honest with you, I really have no idea what I'd do with a story that was focusing on pirates, there's already enough comics that do that far better than I could. (I also suck at drawing boats!)The name vampirate still suits the main character, just not the entire story. Though I may find it hard to see how the missing pirates make the story lame & boring (except unless you mean this eternal party!)since I've put it plenty of action & stuff similar to that which was present in the pirate days arc, I respect your right to say so. I can't promise any pirates any time soon, but I'll try harder with the story!

chameleon: Yay, you noticed! But I have to make it a little more clear, the elites share one common trait: Their eyes. If they don't have those sort of eyes, they aren't elites. Quixoto is actually what we call an “ancient” (or he called himself that) but if you'll notice how he refers to the elites as a separate species from himself when he addresses them (“you elites” and such). Q seems to be frequently mistaken for an elite because of his ather odd demonic traits, but he's just a really old breed of vampire that's on the out with the new generation of “purebloods” and their spawn making up the bulk of the vampire population. I don't want to give away too much though because we're gonna learn a lot more about his kind later in the story. This was a good chance to clear up the confusion since you brought it up though, thanks!

Awakend1: Basically, the elites are holding the party at Samrick's palace because of several reasons: 1. To suck up to Samrick and be on his good side, 2. His palace is fairly secure (and we may see why if I don't rush the entire thing out very soon!) 3. It is a big place 4. They don't want certain people to know where the Elite “base” is, so this was a good meeting place. Top that off with their leader enjoying a flair for the dramatic and making celebrations of things, and that is why Samrick's palace was the place to hold the ceremony! However, it was only supposed to be for the elites, and they ended up having to meet in a back room as Samrick let the entire zoo into his palace to enjoy the party.

I see it now. It's so clear what the elite's game is. I can't believe I missed it. I needed to have read ahead but this page shows the last piece of the puzzle.

Q is so nicely done - he's really the guy you love to hate. Worse than Adira how he goads and toys with his victims. Now I'm hungry.

I'm afraid to say that I agree with Charby in the 1st panel. He IS a lot cuter :)

As time goes on, I get to liking Quixoto more and more. :D

Ha! It's True He's still cuter than Vic. Ohh this is the first time he saw Victoria's killer

i prefere our dear charby older =w= i prefere it verymuch.

Also thank you for the links Amelius! Albeit "Here there be Robots" just sent me to the main page :S But the 2 other ones are faved :D

Hmmm, Q aint an elite, so he might have to watch out for getting hurt :P

Oh no! Go get 'em Charby! And now we know why child abuse is illegal....

I thought P.S. stood for plasma-strawberry.

Wouldn't that be P.P.S.? Post post-script as opposed to Post-script script?

TEHPWNER..... a comics dont have to be funny to be good.... if you want funny read the daily newspaper the comics in there are worth reading P.S. whats a soe tip? P.S.S what dose P.S. stand for

DISCIPLINE FELLS GOOD! HA lol i wonder how thing will tern out didnt Charby have blood on his face also? or did he wipe it off?

Hello Amy! Not sure what happened to my last email to you, but I know you check here more than anywhere else so two things. 1) The party may be dragging on, but I still enjoy every page I read, keep up the good work! 2) Mai's hat is not winigng it's way through the postal service to you, expect it to arrive in about a week (sorry it's taken so long, can't believe I bought it at halloween!). Take care! *Fives*

Your work could easily be an animated series on Adult Swim. Thanks Amy.

Hey... do you have a bio sheet for your characters? It would be a great way for me to put everything together. Good update. Can't wait to see what's next for poor ol Charby.

i just notcied something, Victors left eye looks an aweful lot like the elite's, true not as shiny but there is a huge similarity. Or am i just looking for something that isn't there? Ah well either way great comic *double thumbs up*