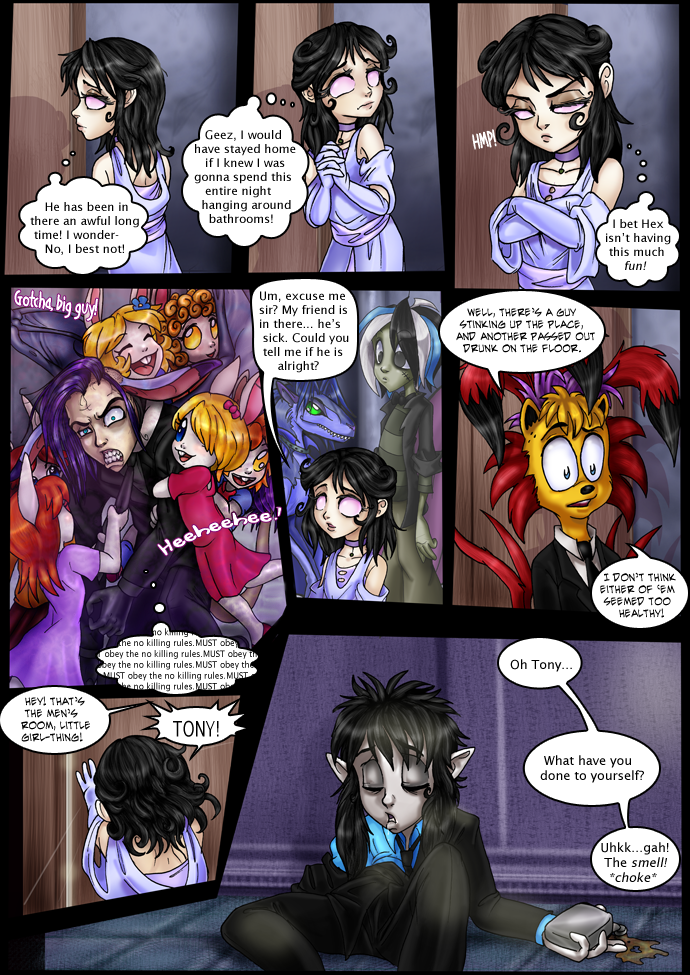 Drinkin' in the Boy's Room

Hey, we have a guest today! The zombie fellow being eyeballed by the Cricetaurus* is Chainey, who is from
Flipsidered's awesome zombie comic called
Maggot Boy. Go, you, read it!

In other news, sorry if I gave anyone the impression that I was being too down on my own art, I know it isn't terrible, and I know for certain it ticks me off a LOT when I look at someone with incredible art, and see them say their own stuff is crappy…because what do they think my art is, when I can't draw half as well! If their's is crappy, who knows what mine is! I can't take any compliment they give me as being sincere, y'know.
So anyway, sorry if I came off as one of those people! I was trying to be sort of cheeky was all. I don't think I'm bad, I just know I need to improve. I'm not gonna claim to be doing any masterpieces here, but I'm certainly not as bad as some people say I am! (and if people think my art is terrible, I'm sorry I just don't know what they expect; fruit on a table maybe? M.C. Escher? Alex Ross?!? I'd rather draw like ME!)

Another item in the news: If you want T-shirts with Charby stuff on it, I got a cafepress store for that. If you wanna suggest things to put on them, go over to my CTV forums and tell me! I've got character shirts in the works (the skull shirt Kavonn wore and soon one of Crispo's chibi shirts)and a poster…some of the stuff is a little pricey because it's on darker shirts…but I'm also trying to get out some other things that will be cheaper, so keep an eye on it if you want and I'll be adding new stuff to the store very soon. I know I dragged my feet on this for the looongest time because I hate asking for money from you guys (that's not why I do this comic after all) but desperate times and all…heh…I'm going to get sick of ramen at this point.
Anyway, sob story aside here is the store: evilempire_shop
We'll also have stuff there from other comics like UIU too.


*A Cricetaurus is something from Night School…go you, read! The current page nearly killed my hand! There's a “hamstersaurus” there, he's cuuute….

I just realized after reading this a second time through... YOU GOT MAGGOT BOY CHARACTERS IN THIS COMIC!!!! I totally didn't see that the first time through... well I did, but back then I hadn't read Maggot boy yet.

Heheh, Hex hasn't learned Mye's trick of carrying around antidote with him.

Ah. More gas jokes. The more gassy among us do not approve! I kid. It's funny.

To heck with the rules, Hex. KILL THEM ALL. Tony's going to have a MIGHTY fine hangover in the morning...

hey!! the stupid computer messed up my smile in the last comment!

hey Hex, don't you know that some rules were ment to be broken? - O U

the dude behind Mye in the Center Panel looks pretty beast :P

At least Tony was the drunk one. That would have been awkward if Mye had walked in and he was taking a mad dump. :S

Your characters are adorable. :) I will take a more careful look.

wow, so many angles of that dress... great work!

The Manga has had its ups and down but it looks like at the moment everything is on track and we're set for a September release. Wish me luck with Cwen's Quest which is the next one I'm pitching to publishers.

Hey amy. You rock, your comic rocks, and you will continue to rock. Incidentally, how is your attempt to publish the Night School manga with EEN working out?

if i was hex honestly screw the no killing rule thats just annoying for him funny but annoying if i was in that position.

No killing?! What a lousy rule!

Seems like Hexavier's girl have gone from one to seven,

Wow, that is one fancy bathroom patron. What is that, a dog-peacock or something? As far as art goes, remember that artists tend to see their own art in a much harsher light than anyone else. At least that's what happens to good artists. You may see the huge smear spot you had to paint over, but no one else notices...

hahahaha hex is having fun isnt he. amy your art is great most people you included that can draw always criticize there work because they think they could have done better or this a little different your art is great