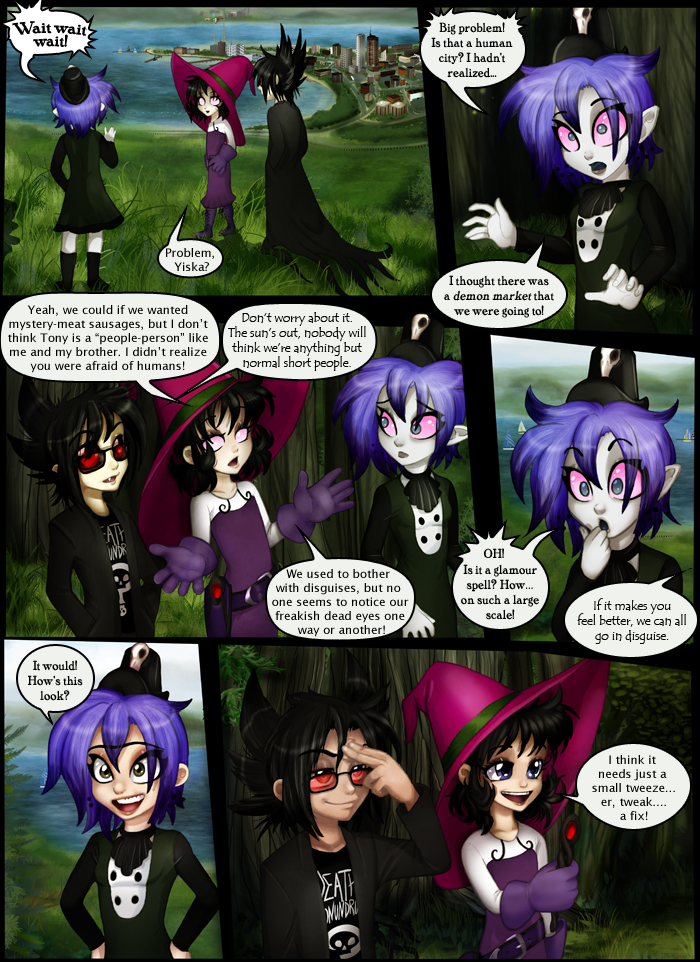 Both tweak and tweeze mean to “pluck” or pull out, though tweak is usually used to suggest an adjustment, soooo…. yeah.
I hope youse like that landscape, little as we can see of it in that panel, because it was a PAIN. I hate buildings! But I must try anyway, or I'll suck at it forever! :C

So of course, Yiska knows about the demon market, and thought perhaps they were going there. She's not petrified of humans, but she is nervous nonetheless. She doesn't really interact with mortals all that much in her line of work.

Thanks for all the congrats and stuff on the milestone! :D I really appreciate the support, you guys make me smile ^_^


TWC looks like it's down right now, blast, and I delayed to finish an incentive! I guess I'll update it with the next page then.

With your new art style Charby's human disguise totally makes him look like a little Victor, I love it! They're all so cute! *HUGGLES* ^.^

@Amy You're welcome for the reminder! :D Hey it let me stay logged in too! :D yaay

Wooooooooow just read through the entire story again all the way back to Charby's pirate days. (Even got a friend of mine hooked when he saw me reading. x] .) Anyway so glad I did there was apparently a lot of important stuff that had slipped my mind. Might re-read UiU now.(:

Oh. *facepalm* Right, yes. Zombie eyes. Of course that's what I meant >.>' Though, I'll be glad to see the stylistic changes you use. You've done marvelous things with charby's eyes, and he's got less to work with, having simpler eyes. But then that might actually be why it works so well. I haven't got a clue how that figures out.

@Amelius: Thanks for the response! I have only really begun to teach myself to draw over the past few weeks, but I like to think that I am getting incrementally better. Also, I would be hard pressed to call many artists as being BETTER than you. Your art style is too unique to judge others by. Apples and oranges, ya know? For what its worth, with type of work that you are doing, I would say that you are at the top of your class. Some of your art makes me super jealous!

@Neilak20: Ohh, I forgot to mention that! Actually, Nick forgot to tell me it was activated and have me mention it in my notes! Thanks for the reminder! :D @the1truesushiboy: Hehhehharrr, them be her zombie eyes on that page is why! For a better reference, check out her brother's eyes on [url=http://www.drunkduck.com/Charby_the_Vampirate/index.php?p=34610]this page![/url] But yeah, they both have creepy large doe eyes. They will change a lot with expressions in the next few pages though 'cuz you know I am constantly playing with the style of things :D Haha, sorry 'bout ABITH too, like I said we forgot it was ready! :p @Jackalopefan: 'tis not a weird question at all! I do the more free-form approach, whenever I've tried the circles and cross-frames I always end up with a mess and the characters don't look quite themselves. Of course every artist that's better than me swears by it, but I can't seem to get a handle on it myself! Typically I just do a quick, feathery-light initial sketch of the outlines of the character then erase/thicken the parts that need adjusting bit by bit. And it takes forever!

@Amelius: I know this may sound like a weird question, but do you draw circles for your comic? Or when you draw your characters is it all just a sort of free form style of drawing?

Man, seeing them with regular eyes makes them look like they're out of an anime, Mye's cuter with her old ones. Also, that background is Fab-u-lous!

Huh... Ya know, I can't recall seeing Kellwood from this vantage, but that's how I've always imagined it; which makes me think that I'm forgetting something I've seen before. Mye has rather larger irises then I'd have thought, compared to Charby and Yiska. On age 893, her human self looks to have smaller irises, though it could just be the angles here. Just thought I'd point it out. And just when, exactly, were you planning on telling us that ABitH is available in print? I've been eager to get my hands on it for goodness knows how long. Not much longer now, though. ^^

Been too long since we've had any public city stuffs. Yay.

i like that mye has a utility belt for her wand :P

Lol, no matter how many people have a problem with Freud's psychology theories, his slips remain a source of amusement.

Let's see if it lets me stay logged in long enough to say Congratulations on 900 pages! Also I noticed A Bird in the Hat is available in print now ouo Double Congrats!!

thats hilarious, mye almost looks scarier that way, yiska looks just about plan stupid with the mono brow and that smile. as much as you dont like the buildings, i think the view is breath takeing, to finally see the town on such a large scale rather than a building or two, and how far they are from town, made me realise they really do live deep in a unkept forest. i always knew but never noticed.

She has a unibrow.

Nothing's wrong with that landscape. It looks cool! Lol, Yiska as a human looks sort of sweet and punky at the same time. She'll sure get to know some very interesting guys that way. :D

Wow they look weird as humans.. well weird by not being weird looking. I'm pretty sure that's a paradox lol