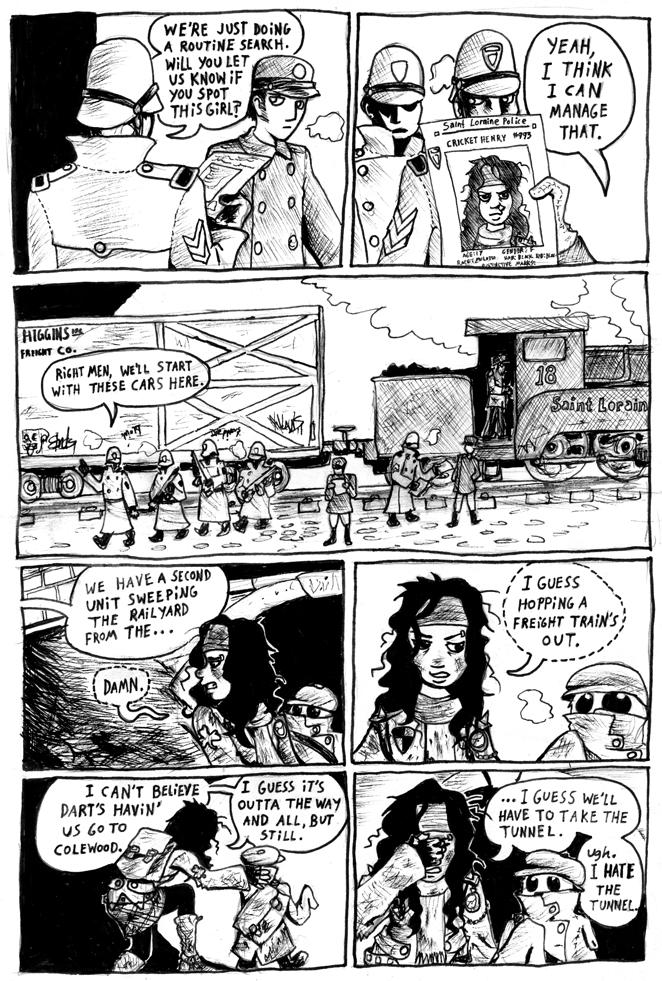 I Hate The Tunnel

I fell short of meeting my on-time update, but I suppose it's the online cartoonist curse that comics are nearly always late. But hey, look! Cricket and Creature are back in the comic! They look like they could stand to be cleaned up a bit but they're here! Personally it's good to draw them again after a time of not drawing them.
————————————————
replies:
@ghostrunner: Ain't they cute?

@JNP: Yeah, Madeline turned out to be an emo girl– honestly, with the dark clothes, the sullen demeanor and the black eye makeup how could you not see it coming! She'll be all right, though it's probably a good idea to keep her away from sharp object for a while.

@Trevor: Aw man, how many books are you planning? I always find it cool to hear about peoples' self-publishing projects ‘cause I’m way big on small press!

@amanda: As much as I worry about it I don't think it's an entirely founded concern. Most people that are actually smart don't seem to mind if you're not well-educated. And hey, enjoy single life while ya can! Just tell people that you'll get married when you're good and ready for it dammit!

@khard12: I suppose it's the one good thing about this situation. Grandma's a pretty sympathetic person.

@usedbooks: Well, she ain't saying one way or the other! It didn't go as well as I hoped– I've got to start planning interviews better.

@Warped: I'm not so sure I entirely agree. From what I've found Tatsumi was a contemporary of Osamu Tezuka, who was an extemely influential figure in shaping Manga and comics and even an early influence of Tatsumi himself. Tezuka was also famous for bringing more mature themes into comics and worldwide is considered to be one of the artists that elevated the medium. Though I will say that Tatsumi is severely underrated for his achievements, especially when compared to Tezuka.
Will Eisner is interesting for being a comics artist that made comic books before expression was coined, practically the entire tradition of American comics is built on his work– there's a reason why the most prestigious award in comics is named after him. Mature themes in American comics in particular have a pretty strange history, particularly when harsh censorship came in with the Comics Code and the backlash that followed with the Underground movement. Maybe this is a bit too much to get into here…

@Peipei: I imagine Grandma's maternal instinct is to thank for that.

That picture looks nothing like Cricket. Cricket doesn't have anything stuffed up her nose. I think she can sneak on without worry!

Well actually we're not in disagreement Tezuka was probably the most important cartoonist of all time. He made comics mainstream by showing that they could tell any story. He wrote comics of every medium geared toward every audience. Tatsumi was really only interested in making comics for adults. Now if you get me started on Tezuka than I might not ever stop. Anyway I'd like to actually get back to talking about your comic. I really hate that tunnel myself Blah!... Hey that train looks awesome!

I have two professionally published stories coming out next year, and then I'll probably self publish another @$$Hole! book. The goal is to produce a new item every year to keep people coming back to the convention booths.

I think Cricket could still slip on the train. She already took the tissue out of her nose, so if she changed her head band she should be totally unrecognizable. (Hey, it works for Superman)

On to plan B...Looks like they're gonna have to hoof it D:.

Colewood!? So does that mean we'll get to see another town from Cricket world? Sounds awesome! It's nice seeing Cricket again. I would like to see some more Dart too though (drool)

not to worry, i hate the tunnel too :)

The tunnel is the best place, Cricket. Don't lie. Everyone loves the tunnel because of the happy fairies that live in it and give everyone nose kisses and face paint sparkles. *nod nod*

Don't feel bad. I've had only four job interviews out of several hundred applications -- and I bombed those. The only way I got a job was by knowing someone who knew someone (and that job was temporary). The tunnel... *Wants to say something clever about Freud.* Um... I can't think of anything clever, so I'll just giggle like a junior high student instead. *snicker*