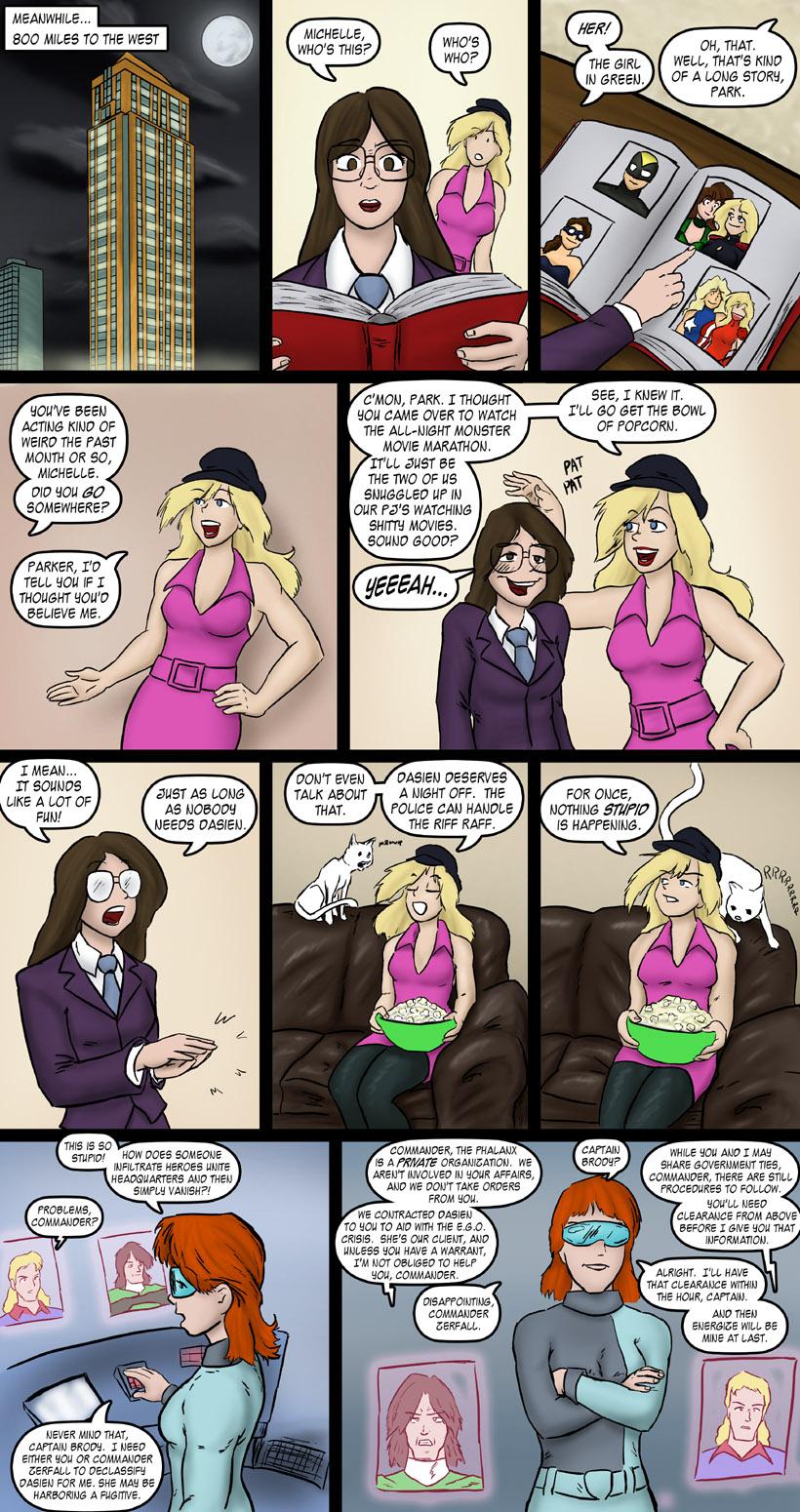 Here's a great page from Neil (he of DASIEN) - a quiet and charming character moment between Das and Parker. But thanks to that nosy HU Commander it probably won't stay quiet for long! Tune in on Tuesday for the next update as Das gets some unexpected visitors…!

From Neil:
"Sorry to keep you all waiting. You knew Das would be making a cameo, and here she is with her best bud in the whole world, Ms. Parker Lynn Bailey!

So, there's a little retcon going on here. While setting up the reunion between Das and Double-M, I decided to enact a small retcon I had been planning to resolve some issues I'd been having with Dasien being part of Heroes Unite. It's nothing against HU, but for story purposes, I had to change the context of her involvement during E.G.O., the reasons for which I can't really disclose at this time.

Commander Zerfall is an important Dasien character, who has not been officially introduced until right now. Again, what purpose he serves will be established at another time. This is the only time that you're going to see him in this particular story.

By the way, the photo album cameos should be obvious by now, but if you must know, they are Energize, Bombshell, The Green Avenger, and Liberty The American Girl.

See you next Tuesday!"

Well, someone's taking a shot of something other than her butt for once.

Bombshell looks happy to be photographed ^_^

To tell you the truth, I'm putting the finishing touches on a certain... erm... OTHER project from a while back, and then I'll be back on Dasien. As for why the Commander thinks that Dasien is harboring Energize, just go back and read some of the previous pages. Energize has been tracked to Stratford City. There's only one safe haven for him there. Someone is about to get a visit.

Speaking of which, wondering when Dasien will continue. Wonder why the comander thinks she's harboring Energize?

okay, i also have to comment on just how dorky parker looks on panel 5. every time i see it i just have to go "oh gawd, girl, keep it together." ya know, not like its important or anything, another superhero you dont know that your best pal is getting a photo with, acting strange for a whole month, the entire concept of reality that you hold dear thrown into a shredder if you asked but you get completely side tracked at the image of dasien in...her...yeeeah... what was i saying?

Considering the number ofg dimension-threating villians we've seen lately, EOU, The Smiling Man and now the Doppelganger Gang and whoever is behind them, odds are someone WILLl start thinking about a prison in the near future ;)

It's set in the year he was hunted, before Misty's death, but after the HU started looking for him. The Fearless/Bombshell crossover was first, and then this happened to Energize. Misty is still alive when this happened.

Is this story line convergent with Energizes' current storyline? Semi-sorta?

Interdimensional prisons? Not that I'm aware of... YET, anyway.

I'll let Al answer the hard question. As for your question, Jod, the answer is yes. If only Parker had turned the page, you would have seen it.

Hey, does Das have a picture of Azumorph in her photo album? (yeah I asked question like that after the last guy asks about interdimesional prisons)

well, though it doesnt concern this story or page but to the whole of the multiverse in general, does ringo or any other dimensions serve as a prison to extremely dangerous entities that threaten the multiverse? like the armory in crossoverlord, except instead of items, inmate 123, guilty for galactic genocide on 12 acounts or devil lord such and such for collapsing an entire dimension and threatening to do so to others? anyone?

What? HEY! Get down, Critter! Bad kitty!

the important thing to take from this is that the white cat shoulld NOT be on the brown leather sofa. clearly an agent of EVIL!

HU command is definitely in NYC, in a converted fallout shelter for UN delegates. See [url]http://www.drunkduck.com/Heroes_Unite/index.php?p=725497[/url].

by the way, Stratford City is the equivalent of Chicago in the HU Universe.... Well, there might actually BE a Chicago, but it's definitely somewhere midwest-ish. In fact, if you're familiar with Chicago, you[i][b] might [/b][/i]be able to figure out what building that is. I assume that HU HQ is to the east, which, according to the distance calculation, is about 800 miles to, specifically to the UN Building. So, there's a little superhero webcomic geography lesson for you. Of course, I'll never give the EXACT location of Stratford City, because that's how plot holes are created. Better to leave things a little fuzzy.

If the arts good I can forgive latness!