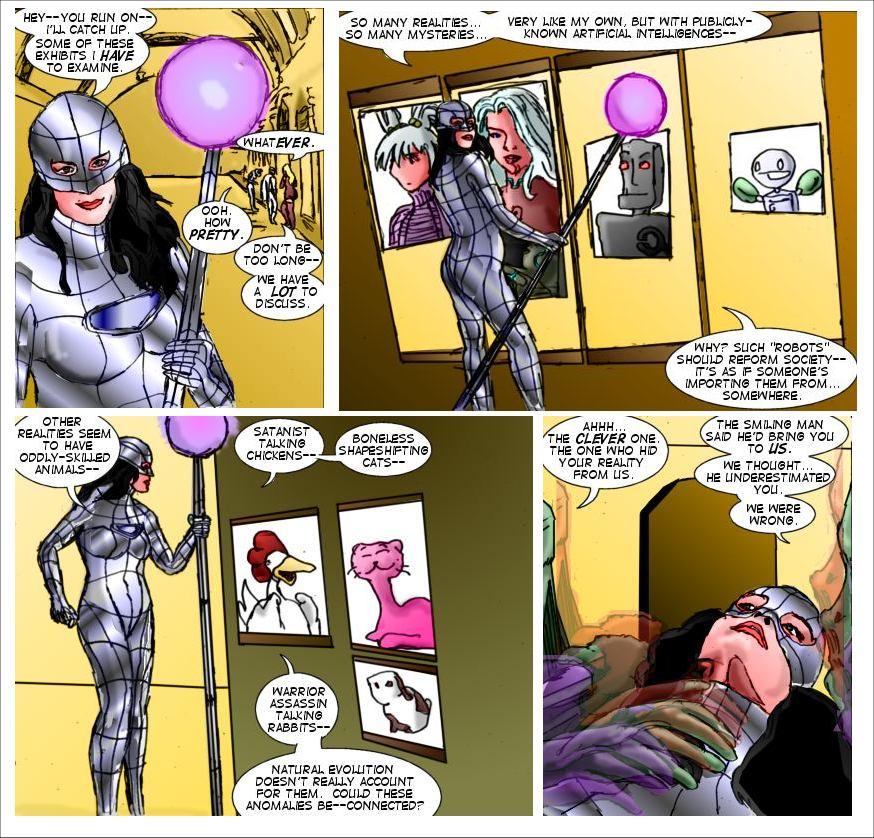 This is actually one of the OLDEST pages of this whole project. When we first got serious about this, I did the first two Mindmistress pages for the story, and then this one in mid-story, to shoot for. (That's why you might notice my art style has evolved a little since then.) You think in that amount of time I'd get permission for everyone I'm cameoing for, right? (The idea is that Mindmistress is going down a hall that allows her glimpses of other realities, more or less themed together.

Wellllll…Randy of SOMETHING POSITIVE kindly gave me permssion to cameo Choo-Choo Bear, Davan's shapeshifting boneless cat. Rstevens of DIESEL SWEETIES kindly permitted the use of Clango, his male romantic robot. Hawk of APPLEGEEKS let me cameo his beautiful robot Eve. Other creators were more elusive(or, more likely, I was using outdated email addresses), so I can't say definitely that MM is looking at Diablo of GOATS or some parallel world countpart. Ditto with Bun-Bun and Oasis, who might be parallel counterparts from the Dimension of Lame—all mentioned in Pete Abrams' SLUGGY FREELANCE. Those familiar with Sluggy are aware that the Keepers of the Armory of Apocalyptic Objects aren't keeping up with all the universes under their watch as much as they should, because Oasis has been proven to be human, not a robot as thought at one time. Sadly, I haven't gotten permission to cameo Pint Size of QUESTIONABLE CONTENT either, so he might be an alternate world version…

Since no one outright refused, I've elected to not change the picture, but encourage EVERYONE, if they're not familiar with those excellent webcomics, to check them out, order their merchandise and books, etc. (GOATS and SLUGGY often range into multiversal territory also.)

Oh. Right. The Sisters of the Twilight—they're pandimensional beings, meaning they can exist in more than one reality at a time, hence the kind of 3D effect they have. They're aeons-old, immensely strong and wise in the ways of the multiverse—a sort of cross between Yog-Sothoth, Swamp Thing, and those creepy drowned girls in the RING movies. If they drain your life-force ALL the way, you're left as a unliving shell.

I was rereading the original story I wrote about them, and discovered they have names—Slither and Shudder, a fact I totally forgot. Hey, it's MM who has the perfect memory…not me.

Next update, Thursday, was finished in the last two weeks, so will more reflect my current art style.

Tell me, Hogan. You're not whimpering because of the number of cameos in today's comic, are you? Don't worry. There aren't too many cameos in[i] this [/i]chapter. [img]http://images.drunkduck.com/community_gfx/emotes/wink.gif[/img]

Hogan, you're not whimpering because of the extra cameos in today's comic, are you? Don't worry, there aren't too many major cameos in THIS chapter. [img]http://images.drunkduck.com/community_gfx/emotes/wink.gif[/img.

*whimpers* And NOW it hits the fan!