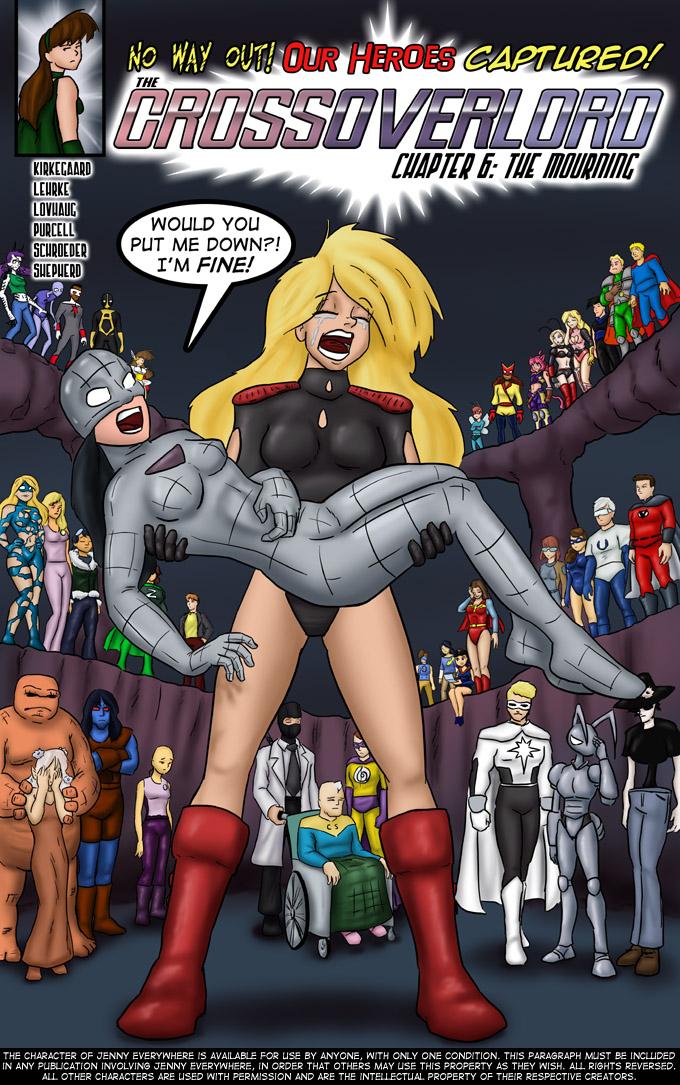 Okay! Time to make Hogan cry for mercy! I've been looking forward to posting this page for some time, and that day is finally here.

So, if you're really into webcomics… and I mean REALLY into them, then this is the page for you. Can you identify some of these webcomic stars? If so, then how many? This page is packed-packed-PACKED with heroes, and some of them are from webcomics that have long since ended. Heck, SOME of them aren't even webcomics. There's at least one print comic star here, although many, many of these heroes are the creations of respected comic artists. Two characters on this page are even the creationists of two of my biggest artistic heroes, at whom I threw myself in a very fangirly way just to beg them to loan their characters to The Crossoverlord!

Well, I promised a cheat sheet, so if you really want to spoil it for yourself (or if you just don't know who any of these characters are), then fret not, for here is the complete list.

Oh I appreciate it, no doubt there! :P I DO recognize a good deal of the assembled heroes, and I know a certain crowd which could help with positive ID on the rest, but it would take time, so I'm thankful for your list :) ... you'll get a 5 seconds headstart when I get to you ;)

Just be happy I gave you a list, pally. I'm sure you'd hate having to track these all down by yourself. Mweeheeheehee!

Gotta say... now that I can be sure nobody is looking... that I am really really impressed with this one. Not only does every cameo fit the bill for both the splash page, the comic but also do they fit the roles they have in the page and the reference itself! Well done, well done :) Now, to put Neil down on my Most Wanted Hitlist... for good!

Mindmistress' cameo in Zebra Girl is one of my favorites. Something about the expression on her face and the quote just makes me smirk every time.

Heresy, DIguana. Sandra saved an entire world from a mad oppressor. She has also fought her fair share of villains and ne-er do wells. The fact that she's made a complete face heel turn because of that over-zealous preacher doesn't diminish the fact that in her right frame of mind, she's always done the right thing with her abilities. Now, granted, it only seems like she's been evil forever since J.E takes that long to update, but I'm fairly certain this turn to the dark side is a temporary one. ;) At least, I hope it is. Besides, one could always chalk this up to a cameo pre-face heel turn. And yeah, none of this is meant to be confrontational. Not even the heresy bit. :p

Does Sandra really belong on in a group-shot of superheroes? She kinda isn't one these days.

Adam Warren's Dirty Pair series had A LOT to do with the style that Dasien eventually adopted. Sometimes blatantly.

Don't tell this to anybody, but my love for Empowered was one of the reasons for me to create Bombshell. They were destined to meet someday! Amazing work! I'm proud my character's a part of it!

That is so awesome to see Sandra, Wonderella and Empowered in this cover. There are others I'm glad to see too, but those are the only ones I saw without referring to the cheat sheet. Man, it is so satisfying to see Dasien holding onto MM like that, especially over her protests. Hilarious cover, I really like it! ...by the way, am I the only one who read Empowered for the plot? It feels that way some days. :P

Splash page! You forgot to mention Yuuki in the top row ;-)

only one i recognized was Acrobat, until I started to go back up. Nice classic pose and great spin on it

...and yes, I am aware that Epoch appears in the MM crossover, but unless the names of characters are drilled into my head, I forget them very easily.

Oh, and yeah, the Epoch thing is based on my not understanding what Al Schroeder meant by saying, "You should use Epoch." Having only read bits and pieces of Magellan (Neil feels like a heel), I went to the cast page and scrolled down until I saw "Epoch". "Ah, here it is!", I said. I did read the Mindmistress crossover with Rochelle, which is why Rochelle is there. I may have even read through parts of the story that have Epoch, but due to time and my relative unfamiliarity with the comic, the name of the character didn't immediately click with me.

[quote=Fesworks]Oh, and you really don't have to put that notice on EVERY instance of her appearance. Usually once, or on a cast page covers it ;)[/quote]Well, since its a cameo rather than a story actually featuring Jenny, it might be a good idea to put it in each time.

[quote=Xade]And I think you broke hogan! O_O YAY.[/quote] Well, in one page, we've nearly doubled the number of cameos that have appeared in the comic thus far. Although, I swear, we're not actually trying to spam the C&C archive, but that's not to say that we don't enjoy watching our page grow. [i] kee...kee...kee...[/i] [quote=fesworks]Oh, and you really don't have to put that notice on EVERY instance of her appearance. Usually once, or on a cast page covers it ;)[/quote] Better safe than sorry, I guess. I'll keep that in mind in the future, should I use any more Jennys. Incidentally (and for no apparent reason), I used a completely different Jenny on this page from the one that appeared on the Red Robot page.

I thought I saw Jenny! Oh, and you really don't have to put that notice on EVERY instance of her appearance. Usually once, or on a cast page covers it ;) Still. Awesome cover all the way :D

Neil, did you mean to say CHARISMA Epoch? Epoch is the father---the dark-haired Superman/Captain Marvel type in Magellan. Charisma Epoch is his spoiled Britneyish daughter.

nice work but i dont see Epoch, I read that comic but I cant see him. And I think you broke hogan! O_O YAY. early morning for me :P

This is truly strange and wondrous. If you need a funny animal sidekick for any future stories, let me know! ha ha ha...

Wow. What an undertaking. Nice job. (pretty cool to see acrobat there, too)