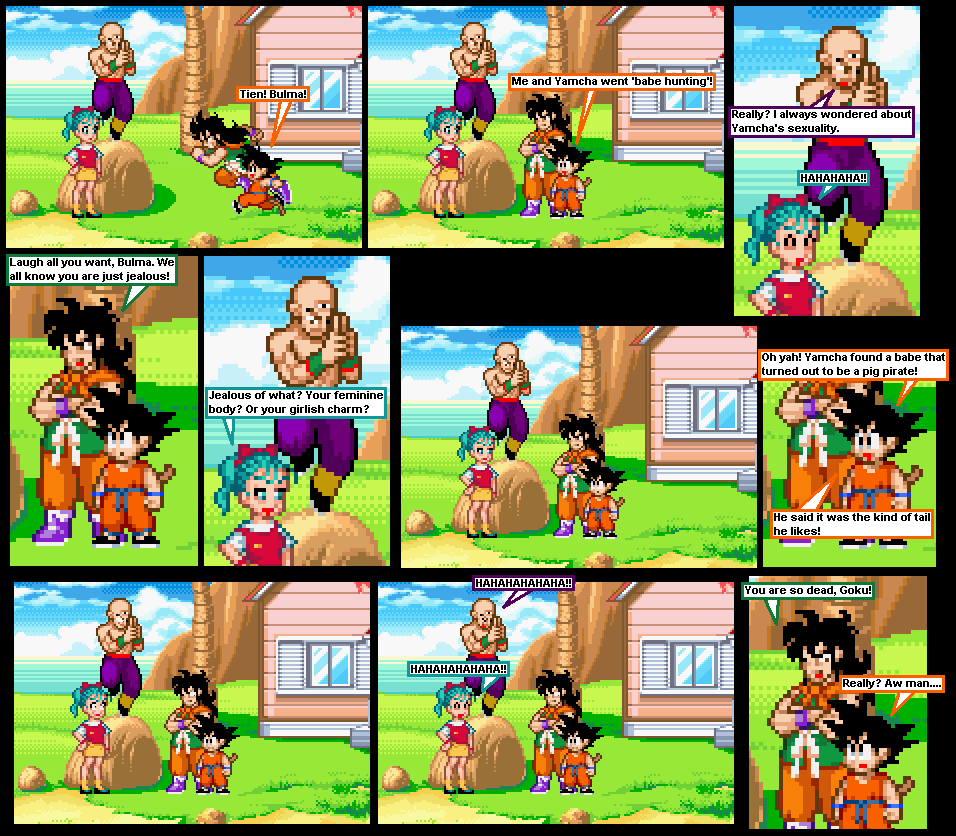 You know those awkward moments when ex-boyfriends and girlfriends fight? Thanks to Goku, it has been broken, but at a cost…

(I understand this comic has long since disappeared, however I'd like to make a point) I must admitt, your panel style is intriguing. The fact that is unique is what appeals to me. Although because it is different, it may be insulted (As has been proven) that is of no major importance. A good comparison would be abstract art. Abstract art is basically a mix of colour with no real definition as to its structure, yet who can say it is not a successful style of art? I believe that you have gone for a unique concept, after all I have grown tired of seeing page after page of Sonic or Pokemon comics. Although I admitt, when I joined around 4 years ago, some of my favourite comic were of that style. Unfortunately, the greatest spriters of that genre are gone and therefore seeing what is basically degraded versions (In comparison to their work) is quite boring. I admitt, the bubbles do need work, as do a few other minor aspects. However Kudos to you for trying something unique.

First of all, go teach yourself how 'style' works, that is the workings behind the panels and speech bubbles. Also, let a dead comic die. GTFO nubface.

okay, i think DB was plain stupid, and DBGT was almost AS stupid. Dragonball Z brought out all the action, and gave a feel of a whole bunch of people. Like, WHY goku had a tail, other people who had tails, and so on... Plus, GT brought out a very interesting point, about the dragonballs being WAY overused...I give it a three... Why? Because your speech bubbles could be improved, you don't have actual PANELS, and a bunch of other stuff i don't feel like mentioning...

Working on a side project, Kagomas. I am reviving an old comic that crashed with Drunk Duck. It is sucking up loads of my time.

School, 360, practicing on my art. You know, life in general.

So... uh, what's the deal? Been ages since you updated, and I don't see a reason.

Are you... Are you advertising the DD Alerter, Nam?

If it weren't for my DD alerter, I would've missed this comic. and for the comic itself I give it a:

Kagomas: Whoever said that? Aussie: If we all though alike, then the world would suck. Xergrim: You flatter, you.

I thought Yamcha and Bulma were still going out?

You're pretty true to the original series. Of course, I have several disagreements in your views on the first page (Then again, DBZ was the first one I saw, though yeah, GT sucked. Puffy AmiYumi has it's moments though and is good for keeping the kids quiet. Teen Titans in alright. Though I do hate One Piece) Time to shut up and five

Ah. I thought I recognized the text style. I see you're back and with a new kickass comic. You've got some damn good talent to whip all these sprites so quickly.