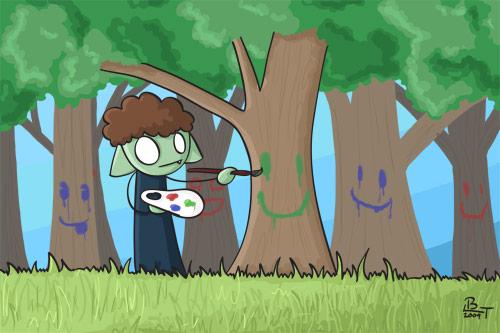 …Bob Ross is awesome. So is Bob Rosspire.

I'm sorry for not keeping you folks in the know on why I haven't updated the comic for so long. Things have been very stressful at work (as in, my coworkers and I are being threatened with termination if we don't make certain goals) and I've had a very hard time finding the motivation to sit down and draw once I get home from work.

I do not consider Hatpire to be a dead project. It will be continuing.

It was a good comic while it lasted. I'll keep checking back every few years to see if it's been continued.

Awe such a cute comic

I am happy you will be continueing this whenever you can

I still miss this comic...

Since this has not updated in over a year, I think yeah, Hatpire is dead. Someone might as well have staked the little guy, just to make it official.

Well he's a vampire so technically it's an UNDEAD project. Heh.

Updating would be like a party in my mouth.

well then let me be the person that gets you motivated!there is a really super cool pin up of hatpire on the first page of a new dd page.go to http://drunk duck.com/ drunk_duck_spare_parts_and_scrap_metal

Thank you for the notice sapp i was almost thinking hatpire died! :(

the trees look happy for some reason...

I've just read them all..Whew and I'll keep reading for sure. :)

congrats on getting featured & love this series!

wow, I think this page has more comments than all your other pages. also, love this, and I can't wait for the store to open

This comic is... remarkably adorable! Congratulations on the feature, ma'am!

i have a pin up of hatpire done and in the can.where do i send it to? ps i do a mean pin up.just ask ghostrunner.

Congrats on the fave!