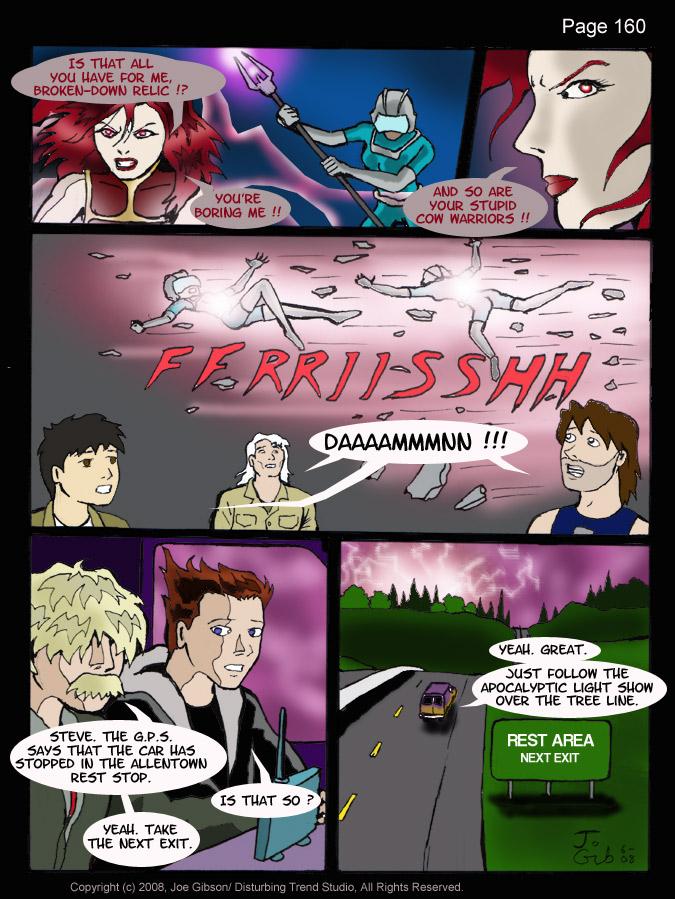 Hello Quackers. Here's a brand spanking new page for ya'. Hope you like it. As you can see. Steve and Luke are about to catch up to Lucin…er, Rihanna. Of course, they don't know what's happening to her. But judging from the apocalyptic light show, they have a pretty good idea that they're heading into trouble.

The cameos for this page come courtesy of Antony from AQua_ng's webcomicking stroke of genius Naive. Aeric Summers from the insanely talented Hal Jones and his comic Beyond Human. And last but not least, Thomas Slugo from Warpedwenger's very entertaining comic Wakon Yosai. If you haven't seen these webcomics yet. Please check them out. They are quite good.

One more thing. I've just started a brand new webcomic called Hitting Rock Bottom With The Creedys. Its a change of pace from HU as this will be a full-blown comedy comic. So please check it out. :D I have just one page so far. But I'll have two more up this week.

I'll see you later on. Maybe sooner than you think. ;)

[b]krisikas, Walrus, and croxtonhas[/b]- Thanks!! Next page is, as of this writing, coming in another 47 minutes. See ya'.

ALRIGHT, YOU HAVE SKILLS!

hip-hip-hoorayyyyyyy(for getting this comic featured)

Congrats on the feature!! Prepare for legions of new fans!!

Congratz on the feature man! You deserve it!

Congratulations on the feature! It was well deserved!

Aeric Summers! My guy's in here! Congrats on the feature

Woohoo big congrats on your feature!

Am I the first to say congrats on the Feature? Congrats! The woman reminds me of... Kaori Sakiyama. Brrrr.

Whoot! Thanks for the kind words and the cameo!

[b]amanda[/b]- Thank you much. ^_^ Light shows rule. [b]BetaJess[/b]- Wow! Better than ice cream!! That's a serious compliment in my book. :D [b]spiritmonkey[/b]- Burn baby, burn, burn. Disco Inferno!! [b]Peipei[/b]- Unless of course you're the one causing the body flying and exploding. Then its all good! [b]DAJB[/b]- Yep. Rihanna isn't what you would call a people person. [b]John the guard[/b]- Thanks. :) [b]slimredninja[/b]- Thanks, slim. Thanks for the comments and high fives everyone.

Maybe it's a disco light show?

Apocalyptic or not, it's still a really cool light show! Nice job