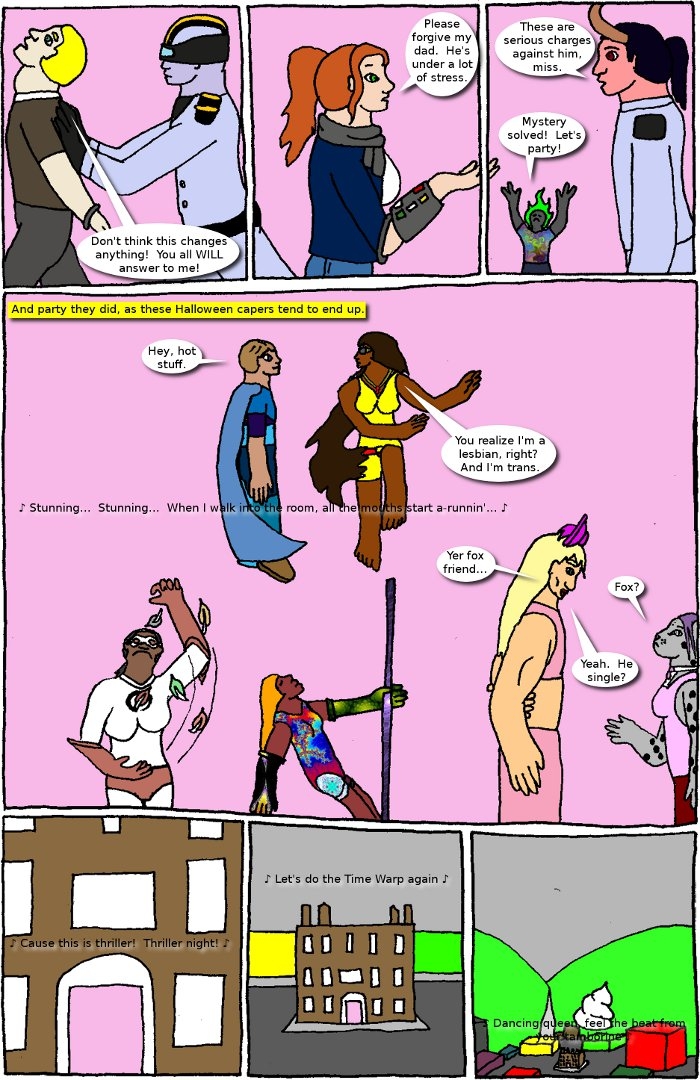 Onto the page at hand: And so ends my bit of the 2012 Halloween Cameo Caper.  I realized after it was too late that I forgot to include the Runner on this page, but such is as it is sometimes.  The cameos are Hogan (from the Webcomic Cameo and Crossover Archive), two cops from DDSR (don't know their names), Scale (from CameoComic), Chaos (I just had to include him one last time–from Life and Death), and Cat (I think that's her name–from Hey Fox!).  There would have been more, all in the group shot, but I was pushing it with who I did put in.  But I finally show Eiderdown using her power in the Caper.  I actually like the image there, and it's better dancing than I've shown her doing before.  And I like the way I drew the Swimmer's hair, as she dances in the air.  Plus, Fractal doing a pole dance was another fun thing (the pole being made using his power).

Yesterday I had cameos and forgot to mention them (especially bad since my characters weren't on the page).  They were a couple cops from DDSR (one of which is on this page), the penguin from Abui's Travels, two character from Times Like This, and Hogan of course.

Cool! I'll try and save time for participation next year... of course there ARE some events that Cassie'll have to work around... ;)

Cool! I'll try and save time for participation next year... of course there ARE some events that Cassie'll have to work around... ;)

I would like to wish everybody a Happy Halloween... but I'm a bit locked up at the moment... :|