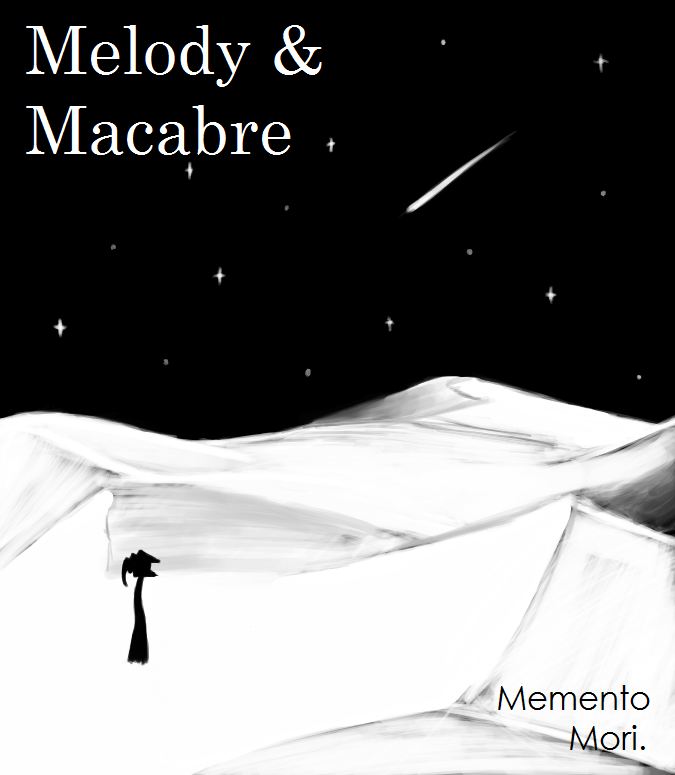 I had many ideas on how to do this page. I'd considered either a zoomed up or panned out
view of Melody and everyone in the snow, but someone else suggested an image of Melody
smiling. I'd sketched it out, then I saw a different recommendation, regarding an old
piece of art I did based on the series. I found it very fitting, given the subject
matter, and said “Damn the ambiguity” and drew it anyway.

See… for a while I'd played with the idea of the MM cosmology, and whether or not it
should actually be in the story (so as to keep the question of what the afterlife really
is like). I'd considered, however, that the universe is not unlike an hourglass
(referring back to the hourglass motif within each individual).

I'd assume that in the top of the Hourglass is what some could call Paradise, or Eden, or
Heaven. The Origin of all souls. In the middle-ground, the little piece where all the
sand passes through, is the world we perceive to be real. But in the bottom…

A vast desert, gleaming with the souls of the deceased. Above in the heavens, the souls
of the yet-to-pass shine like stars. And when a soul dies, it passes down like a falling
star. So was the art I drew, and so is this new page.

Despite the other bit of the suggestion - that Melody stand with him - I think the
original version with him alone is a bit more poignant, and addresses the fact that
despite what the Boogeyman may think, she was not special, any more than Samael, or Simon,
or Ace.

Remember your mortality. You are but a human, full of faults and not to challenge the
Powers that Be. Know your place, mortal, for while you revel in your victory, tomorrow
could be your last day in this world.

Very beautiful back cover, and very good thoughts. I think that the hourglass idea of the afterlife is sound, and definitely makes for great philosophizing. Also, the idea of Death being alone is, I think, better than him being with Melody because although she was lonely, I think he was the loneliest of all because until (as I said ages back) everything has died (or until enough has died to stop thinking of him, if he is a tulpa), he cannot die himself, so although he was with Melody, he would still be lonely as he knew she would soon die, and he wouldn't. I don't think Melody is any more special than anyone else, but in a way I think she was... if only because Morty could relate to her a little. Maybe he also felt sympathy for her and decided to make her last week or so at least a little worthwhile. Either way, a beautiful and clever story. I showed it to my boyfriend, who read it in about a day and a half, and he found is as clever and as funny as I did. Thanks for a good run, Andy, this has been an excellent story in many ways :) Thanks for sticking at it, too.

Beautiful desert there, the type of place I actually enjoy spending eternity in. I do believe that Morty had to treat Melody like everyone else other wise it would have been much harder for him to claim her when the time came. So I agree in your point of leaving Melody out of the back cover as it would made Morty seem even more lonely than he is now.

Congratulations, it's been a good run. Good luck on all future projects (I'll be watching 0_o).

all things come to an end whether Good or Bad. This was a good comic :)

So long every body and thanks for the ride. This brought a little tear to my eye. A sad and happy one.

wow... that was quite a ride, man. i wish you plenty of luck on all your future projects.

I'll give the details tomorrow, on my next project. Complete with links, which I really hope work here, otherwise it'll be copypasta for everyone. XD

Memento mori... ah, death. Seen in the turn of a card or the dregs of a teacup. Hungry, insatiable, Santa Muerte, greedy old Mictecacihuatl herself, the debt we owe the gods... How gloomy.

Excellent work, and good thoughts, too :)

oh it's over? I JUST FINISHED CATCHING UP!

Thanks for such a good comic, though sad, I had a good time with it.

Great back cover... what is your next project, then??