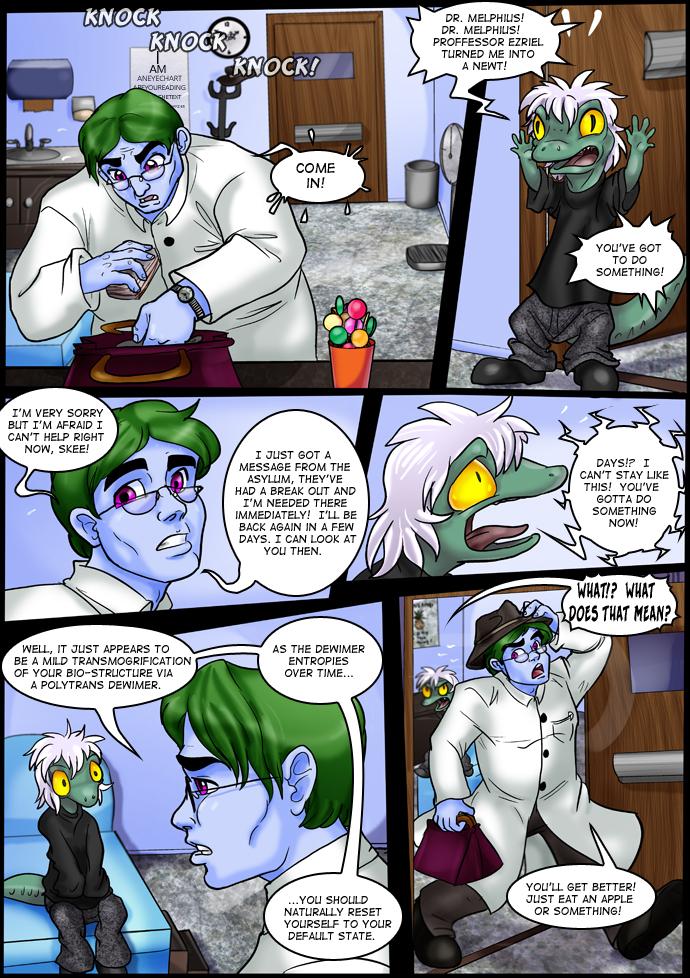 Hey everyone. NS is on hiatus right now until PS decides what is next for the series, but if you are looking for more NS adventures you can read the Graphic Novel which contains over 100 pages of original content on Wowio.

GIVE US MOOOOOREEEEE! if you don't we will haunt you forever

more from this story

Hmmm... I think you may have meant "dweomer" instead of "dewimer". Perhaps this will help? http://en.wikipedia.org/wiki/Dweomer_%28Deverry_Cycle%29

That is perhaps one of my favorite Monty Python quotes. =)

Honestly it is less about getting it back and more about being able to work on the series again. Amy really just can't afford to work on projects she doesn't see ad money from creator owned or otherwise. While it would be nice to get the NS rights back I'd be just has happy to partner back up with PS to do another installment as I love telling NS stories and Amy would do it for free if only she could afford to do so.

Well Suicide always gets a response. Good luck getting it back!

Plzzzzz tell Platnium Stuios that and hopefully they'll agree to continue the series.

Plzzzzz add on to this comic ill DIE !!!!

Then please write to Platnium Studios and let them know there is a real demand for more Night School.

this needs more!!! ive read it through twice and the manga comic too... MUST SEE WHAT HAPPENS TO THE INSANE ONE

Then please write to Platinum Studios and let them know there is a demand for more NS. Currently the only other NS stories are on the NS Graphic Novel which you can read on Wowio.

now i have got around to reading this. mayhap you should get around to updating it! XD seriously though did it occur to you that if you barely have time to update any of your comics, let alone sleep, if 3pf is anything to go by, you might be spreading yourself a mite thin? however discontinuing any of your comics would be a pity. meh. such is life.

Just realized 2 pages had been added since the last time I read this lol. Sad thing its it almost been a year since they were added. Great as always thought. Hopefully PS will get there act together and let you guys continue so night school doesn't got the way of Hero by night.

i should get around to reading this...

awww. :_: It's soo good too I was wondering what happened

Night School is on hiatus until Platnium Studio decides to continue the series I'm afraid. We've expressed interested in continuing the series or even buying the rights back to continue it with someone else but we've yet to hear anything back. I'm guess IF anything new happens with NS it probably won't be till after some of PS's movie projects like Cowboys and Aliens come out in 2010, 2011 and 2012. So at least for now it looks like Night School is probably going to stay on hiatus.

Are you taking a break during the summer or something?