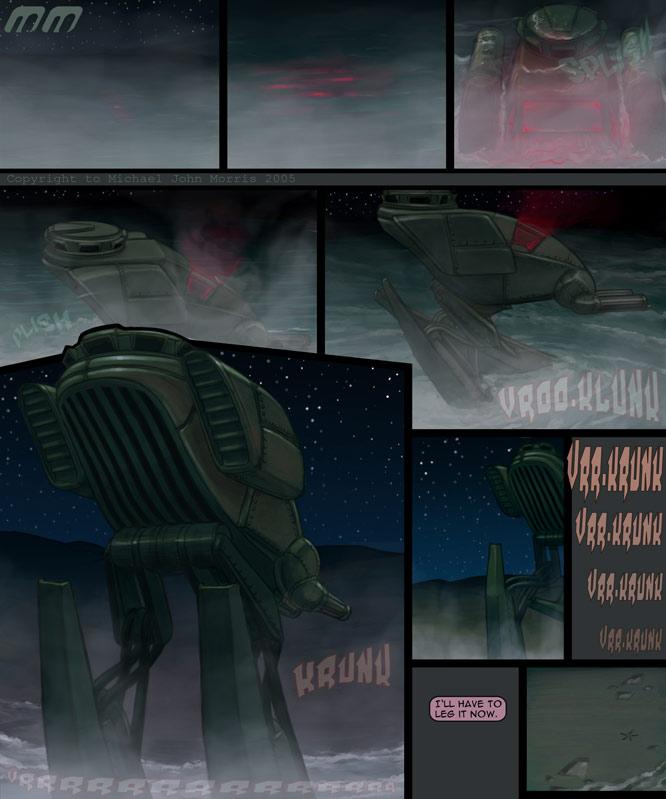 News:
Headache over, too much codeine in systemâ€¦â€¦â€¦â€¦â€¦.blargh

Page description:
Pinky reaches the shore in her S.S.V.5. It raises itself out of the water on its newly unfolded legs and goes walking of to its destination, with a bit of a clunky sound effect ^_^

Commentary:
When this page was first put up, the walking nature of the S.S.V.5 was meant to come as a bit of a surprise. It took ages to develop this beast properly, to work out where all itâ€™s bits would go, what shape they all should be etc. I still get some of the angles wrong when drawing it.
Itâ€™s an interesting machine: The S.S.V.5 is armed with two 50 calibre linked Vickers machineguns and two rocket pods carrying 7 high explosive rockets each. It has quite a bit of frontal armour, the pilot sits in a reclining position and looks out of the windows through a pair of angled mirrors which double as protective armoured shutters. If those are closed the pilot is able to use a periscope- there are also periscopes in the upper hatch. The cabin is illuminated by red lights because red light doesnâ€™t harm night vision; none of the dials and buttons in the cockpit are self illuminated so you need cabin lights in order to see them.
Most of the power needed for the machine to walk is provided by one diesel motor in each armoured leg. These serve to raise and lower the two lower leg rods on each side, causing the legs to move up and down. The shifting weight and balance of the legs makes the S.S.V.5 walk. These motors are also setup to provide the thrust when the S.S.V.5 is submerged and the legs are folded.
Thereâ€™s nothing â€œroboticâ€ about the S.S.V.5 at allâ€¦ But then, what are â€œrobotsâ€ if not mundane mechanical or electrical devices with animal like characteristics? Add computer control and something with half the functionality of a sewing machine is deemed virtually human.

A note:
Go to my main site for the latest work (27th January, 2006). Iâ€™m uploading one page a day with commentary and explanations here.

Ooh, very nice - like the way the SSV5 raises out of the water and reveals itself in all it's gritty glory. The 'puncline' of the page is nice too :P

LOOK! It's big fat freakin machine that I could never ever draw! YESSSSSS! You certianly make for an eerie night with your "fog o doom" effect.

Thank you for the good comments ^^ Yeah, I was happy with how it turned out too, although the green is a little too green... but apart from that: fine. Yeah, that was Ed209 in robocop. That was a pretty groovy piece of gear.

Awesome...this always reminds me of that mechanic in the first robocop movie....Good memory that is :)

This is a good transition page. It's really nice to have some pages where there just isn't any (or much) dialogue. It's good to let your art do the talking for you!

love that red light and how it diffuses on the fog

Whatcha gonna do with all that machine inside your trunk? I'mma get Krunk, Vrr-Krunk off yo' mecha. Mmmmm Great details

Very nice! As always. Just assume I'm floored by your work unless I say otherwise.

That is one bad ass peice of mech.