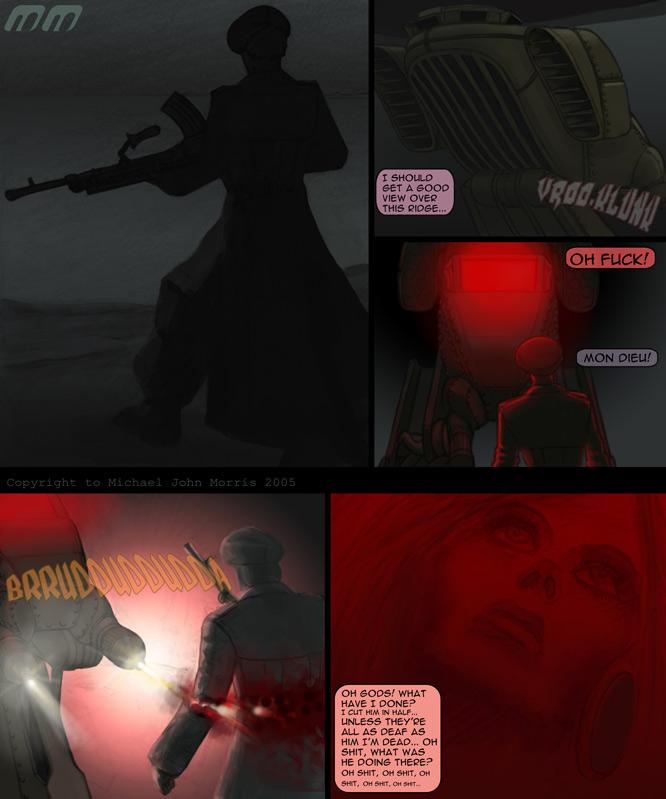 Page description:
A guard is standing on a ridge, holding a great big light machinegun and nodding of sleepilyâ€¦ Pinkyâ€™s scout pokes up above the ridge and comes face to face (or rather armoured cab to face) with the daft fellow. Sheâ€™s so surprised that she just flicks on the guns and slices him in two.
She didnâ€™t expect anyone to be on guard like that. The sound of those heavy machineguns blasting away in the stillness of the night is sure to announce her for miles around.

Commentary:
Thereâ€™s this idea that if youâ€™re shot with a gun, you go flying backwards in reaction to the force of the bulletâ€¦ Well, from what little I know of physics and from what a few of the experts have said; contrary to most computer games and Hollywood movies, hardly any movement is transferred â€“unless the bullets hit something hard, like armour or a helmet. In soft things theyâ€™ll just go through, turning the force into splatter and heat, especially great huge sharp 50 cal bullets at point blank.
So thatâ€™s the theory behind the 4th panel anywayâ€¦ Remember though that shotguns and grenades, even hollow-point bullets, are a different kettle of fish.

Geez, the guyâ€™s silhouette pose in the first panel is really quite stiff! For this page I wanted to retain a lot of the original sketchiness so I didnâ€™t get rid of too much of the pencil lines, thatâ€™s why things are a bit rough here.

A note:
Go to my main site for the latest work (27th January, 2006). Iâ€™m uploading one page a day with commentary and explanations here.

Looks good - the red is particularly evocative. The way the bullets, er, interact with the person is correct as well.

Hmm. even if I saw this page before, I still like pinky's face in the last panel. she looks so pretty there.. XD

Ooh, the upshot of her face in the last panel under the red light looks really great! You did well with the perspective and what not. ^^

That's a "stunned mullet" expression ccs1989. That basicly means "duhhhh..." or "oh... shit." That's what happens when you do something bad or really stupid, but it takes a little while to register properly ok? ^_^ Like when I accidently yanked the processor out of my computer the other day. Heeey, quite a compliment Zac! Yeah Ham, Pinky will always be human, even if some of the other characters aren't. Well Mazoo, you will fly back a bit after firing some big guns... Big machineguns like these would send you wizzing! But you're right, for assult rifles, submachineguns, pistols and rifles the recoil is obviously enough to handle. The other thing is of course that bullets are exerting that force on a much smaller area than the blunt but of the gun.

they're all deaf of course

Oh wait, is that panic? I guess it's not remorse. I need to read these things better.

I think it adds more the shadow-y-ness of it. If I had a better word, it would make sense, but... I like it.

MOW THEM ALL DOWN!!! whooooooooooo

Oh by the way awesome page. That guy getting his arm blown up looks straight from a movie.

Wow. Pinky shows some remorse with a face that shows none.

Ok what you call sketchynes is downright ace art to me :) I never tought of bulletholes this way! BUt I love the last panel...Pinky's my kinda heroine!!

i like the look on pinkies face in the last panel , she looks very SHAKEN !

I am very interested how all these people beat me to the post! Nice Work by the way

Crap... that really sucks for that dude. Man, Pinky's in a pickle now... (harr harr) I know that what you say about people flying back from bullets is true! If people really did go flying when they were hit, then the shooter would fly back when they pulled the trigger as well!

The page descriptions are really helpful. I sort of figured what was happening, but after reading the page description, it makes it a lot more worthwhile ^_^ Panel four brings back memories. Pinky's in for trouble!