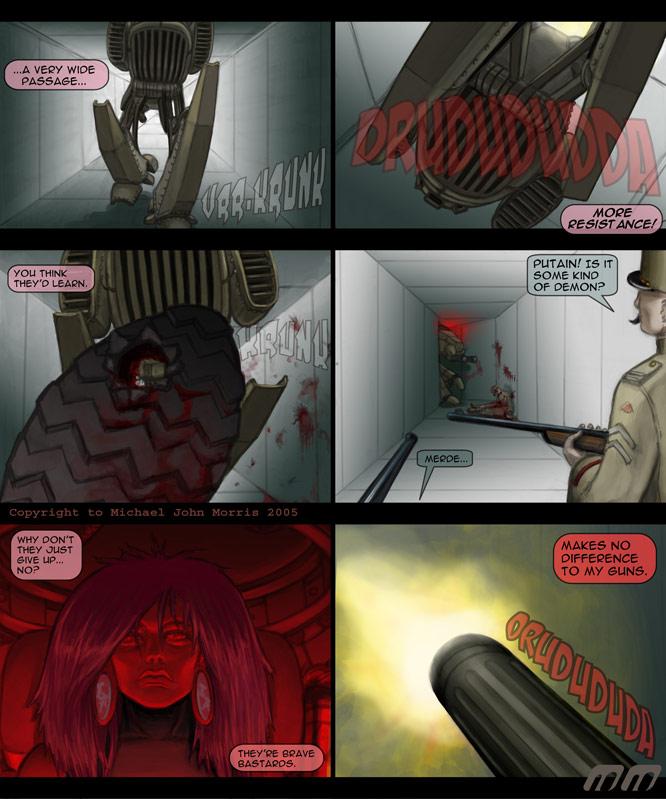 Page description:
There Pinky goes, tromping into the main vehicle access passage. She encounters some troops and we see the underside of the S.S.V.5 as she cleans them up with her guns. In the next panel all you see is a hole through the sole of a boot as the S.S.V.5 walks on. As she rounds the corner, about to walk over a slain soldier, these guards catch sight of the advancing steel snout, the giant metal legs and the baleful red light; as if from the eyes of evil. They find it quite scary. The thunder of heavy machineguns in such a tunnel would terrify and deafen!
Pinky is already starting to have second thoughts. The carnage is becoming too free, too easy. But that doesnâ€™t stop her shootingâ€¦

Commentary:
Well, well, well, The layout is a little monotonous, but itâ€™s supposed to be. But that view in the third panel with the boot in it is ALL wrong! Itâ€™s a good idea, but the angle is way too high for it to work. A boot should look like itâ€™s on the ground, not floating in the air! Needs a re-draw at some stageâ€¦
The other problem is Pinkyâ€™s face. It looks too different. I really liked the look so I kept it, even though itâ€™s wrong. That blasting gun turned out well though. All my research into muzzle flashes paid off! Just white and yellow painting there, no dodge layer here.
-hmm, I tried looking at this site on a G5 Mac running some shitty version of IE explorer, the comment field was MASSIVE and the rest of the comments were spaced way down the pageâ€¦ Anyone else see this site looking like that?

A note:
Go to my main site for the latest work (27th January, 2006). Iâ€™m uploading one page a day with commentary and explanations here

oh yes, I remember this. You are almost caught up!

This reminds me of a video game suddenly. :3

That thing would be pretty freaking scary to meet in a claustrophobic corridor like that one... poor miscellaneous guards!

your coloring skills knows no bounds

The framing's nice, because it makes us feel as confined as she is in these little corridors.

Thanx Madscott! Ah haha Ham. It's a good idea. Maybe I'll fix up some of the weird artwork and get around to looking into publishing. It's a big step to take though. Ewww, good idea inseutculnaime. The body could've twisted that way after the scout stepped on and crushed it... But I should still fix it. Fork: There were a few more pages, but yes, it is close. LoL Coy ^_^ Coinilius, yeah, it's embarrassing... Ah magicalmisfits, all Pinky has to come with is the killing... Just being in the machine cures you of claustraphobia. The sound would get a bit much though.

I think this may have been the first issue of Pinky TA that I had ever read. I'm Glad I did.

I like the view through the hole in that guy's foot

3rd and 5th panel are brilliant. Th third is just so funy with that footsoul up close at the camera. And the 5th..well lets say you mastered this red glow really well now! Ozone,is this comic up for order by now? You should be on the webshelf next to Alpha Shade?

The boot could be attached to a leg the bones of which were so crushed and mangled that they formed a semi-rigid lattice to hold the appendage aloft.

Isn't this close to where you left off last time on Duck?

The sudden change to greys and rigid panel structures pays off really well, IMO - the contrast to the previous pages is beautiful :) Panel three really IS off - before I read the commentary and went back to have a look at it, I thought it was supposed to be depicting the foot lifting up behind the SSV5 (as if it is taking a step, with the leg lifting up off the ground).

Ohh I would not want to be in that corridor in a tank! She's a better man than me.