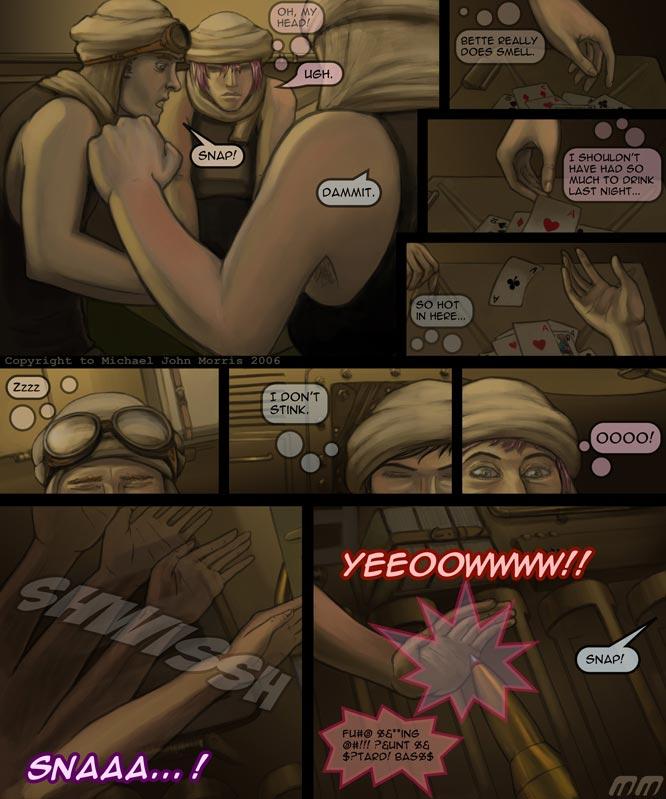 Page description:
So they're playing snap: Pinky Dave and Betty. It's boring and dull, as snap always isÃƒÂ¢Ã¯Â¿Â½Ã‚Â¦ And HOT. Pinky overdid it the night before and is really starting to feel it. As the others lull into distraction, Pinky thinks she see's a chance and quickly whips her hand down for the SNAP. But no: the only rack with a shell in it and it happens to be hanging half outÃƒÂ¢Ã¯Â¿Â½Ã‚Â¦ Pinky hurts her hand and stinky Bette gets the snap!

Commentary:
Jury duty cut my working timeÃƒÂ¢Ã¯Â¿Â½Ã‚Â¦ I could have had something last week, but I didn't, sorry for the huge two week break guys. The case was a tawdry sexual assault thing, but really dodgy. Anyway, we found him guilty. It was great to see all the gear the barristers and judge wore, the robes and jackets were great and so where those 18th C style horsehair wigs! Being on a jury isn't fun though, it's dull and making a decision that seriously affects people's lives isn't exactly hard, but it doesn't make you feel very nice when you've made it, even if your believe it was right.

Extra:
I'll have a huge response to all the last page's comments up here.

[b]REPLIES[/b] [b]Silus[/b] - TY ^_^ [b]Mega Josh[/b] - INDEED! [b]Dracco[/b] - Thank you man [b]Zoe[/b] - Haha, thanks Zo, you're good at colours yourself. [b]Lothar[/b] - Thanks Lothar, that's exactly what I was going for. [b]Mr Mustard[/b] - Hehehehe, it's way too much work though. [b][/b] - Thanks sub. Heh, not quite a tank explosion, more like a Pinky Explosion! [b]Alej[/b] - Snap is the most basic game... You separate a pack of cards into equal lots and each person takes turns flipping one down onto the pile in the middle so that they land face up (you hold the cards face down). When you see two cards of the same value on the top, you wack the pile and claim it. The person left with no cards loses. The costumes [i]almost[/i] made it worth it! [b]Bit Player[/b] - Thanks Bit! Aw, I don't know about that ;) [b]Greeeeeen[/b] - Awwwwww, tough titties... That has to suck -_- I hope you made so great looking T-shirts at least! Bugger, you miss out on the fun stuff :( [b]Mad Mazza[/b] - Thank you ^_^ Yeah, I've been on enough sweltering bus and car trips in the hot country that I live in, I'm glad some of the experience filters through. [b]Draco[/b] - Thanks Dracc! Thanks so much ^^ [b]Crazy[/b] - Oh yes indeed. Lucky they're not in one of those little Sherman tanks... FIVE crew in those little things! [b]Sarah[/b] - Oh yeah, she's a poor clumsy pink haired clown! ^^ [b]Spazza[/b] - No it's not! XD [b]Jillyfoooooo[/b] - nawwwwwwww... Wouldn't be much good at killing other tanks if a handslap set it off ^_^ [b]ZAC[/b] - OOOooooh yes! I don't expect my ladies to shave all their bits... [b]Glass[/b] - Far too much bloody time!!!!!!!! I'm going to cut right back to a few hours. I need to. [b]Nick[/b] - Never heard of Snap???? The easiest card game ever invented???????? Wowsers! [b]ChrisJ[/b] - Ha! That's nice an succinct man! Thanks! ^____^ [b]Hero[/b] - Thankyou hero. [b]Madscott[/b] - Thanks man! I wanna cut back now though -_- [b]Tantz[/b] - Indeed! And it can only get worse ;) [b]Simon[/b] - Omg man! That makes me feel even sicker... Ewwww, you've got the environment perfectly: Extremely unpleasant. [b]Hawk[/b] - Ah ha! The trick is simple: do the background first, then just paint over it with your tablet brush set to change the opacity with pressure. That way you can paint over like you're doing watercolours or glazes in oil paints. Alt click to sample some of the mix colours on the screen and uses them to paint with as well. Really keep things unified! [b]Glimmer[/b] - Ha! Thanks man, I always like it when panels strike a chord!

Love the dark atmosphere and the pink!!! You always mix colours so well!!!

You captured the delirium and thick air feeling realy well !

Nothing is too pretty for the Duck. Raise the bar; raise the bar!! ;-)

your flesh colors are cool. awesome lighting! next page..tank explodes!

I played snap on bus trips in school. I never understood the game but it does pass the time. Glad your jury duty is over. At least you had the entertaining costumes! The amercian courts are totally lacking wigs.

Dude what the FUCK. This comic is too pretty for DrunkDuck.

Ummm, ouch. We took some cadets on a shooting exercise this past weekend- I got to supervise them as they colored t-shirts with markers and didn't take a single shot. Not one! Guess that's what I get for being the 'artistic' one. bah.

Yeowchies! That looks like it'd be quite painful! You did a really good job with the color palette to make it look pretty sweltering in the tank there... Sweet job!

What can I say? Fantastic, as always!

Looks a little crowded in there.

Great color... How much time do you spend on these strips?

Playing cards is fun! :) never heard of snap tho...

*chuckles* I can actually feel the nausea. Well done.

I can sense their pain being in a tank in a desert and it is as hot as hell! What even makes it worse is the putrid odor around if there 2 or more people! What even worse is the Carbon Dioxide being sniffed through their noustils! Anyway, I was like being gibberish in a way but yeah! Nice art as usual! Hand in motion makes it a great poetry!

You're good at holding to a proper color scheme, Ozone.