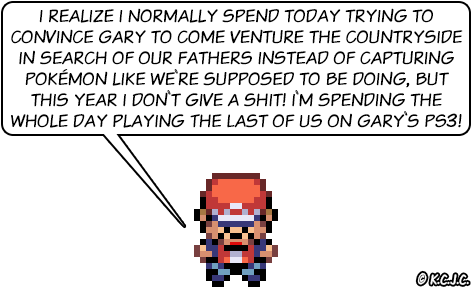 So, as I mentioned before, my computer got replaced. I can't afford it though. Despite my dad saying he'd halp out and I only had to pay $500, he turned around, told me I had to pay $1000 (the majority) and then that was that. I'm now forced to pay back 1000 dollars, instead of 500 dollars. I dunno how that'll happen unless people are actually generous enough to donate money :( Also, it works great! I'm using it right now!

Anyway, if someone wants to be a nice person, actually see some sort of continuation to this comic and the others I work on in any way whatsoever, you might wanna wise-up and send in a couple dollars. Here's the url: http://adf.ly/JnKE

If you haven't seen it yet, I posted a comic about this very same issue on January 19th located here: http://adf.ly/yDxL (I need to reup it still..) :(

I'm still looking for a new Professor Oak. Anyone who wants to try out please contact me privately in some way (PQ, PM, email, IM, etc.) and send me a sample. Also, this voice needs to NOT be morphed by any sort of voice changer - such as MorphVOX, nor can it be some computer generated crap. If it is, you're just wasting both of our time. Seriously guys, the Flash won't be going anywhere if I can't replace him in a timely manner.

I'm all out of guest comi*shot* But seriously tho, a year and not a single person sent in a sample that I could even remotely judge? :/ Actually, that being out of guest comics isn't entirely untrue!

A message to those people who can't read: The next page is an animation made completely in Adobe Flash. Until it gets finished this comic cannot continue, I will never convert it to a normal page simply because it's not fucking possible. I also cannot work on the Flash until I get a new voice actor for Oak. I have not received any samples that were audible enough to be even considered worth it. So stop fucking asking already.

Send in more guest comic, money so I can get a computer that works and actually be able to work on things, and SOMEONE ACTUALLY TRY OUT FOR OAK I MEAN SERIOUSLY, WHAT THE FUCK PEOPLE?!

Holy crap, this still exists? I just rediscovered this by accident via Google. God damn.