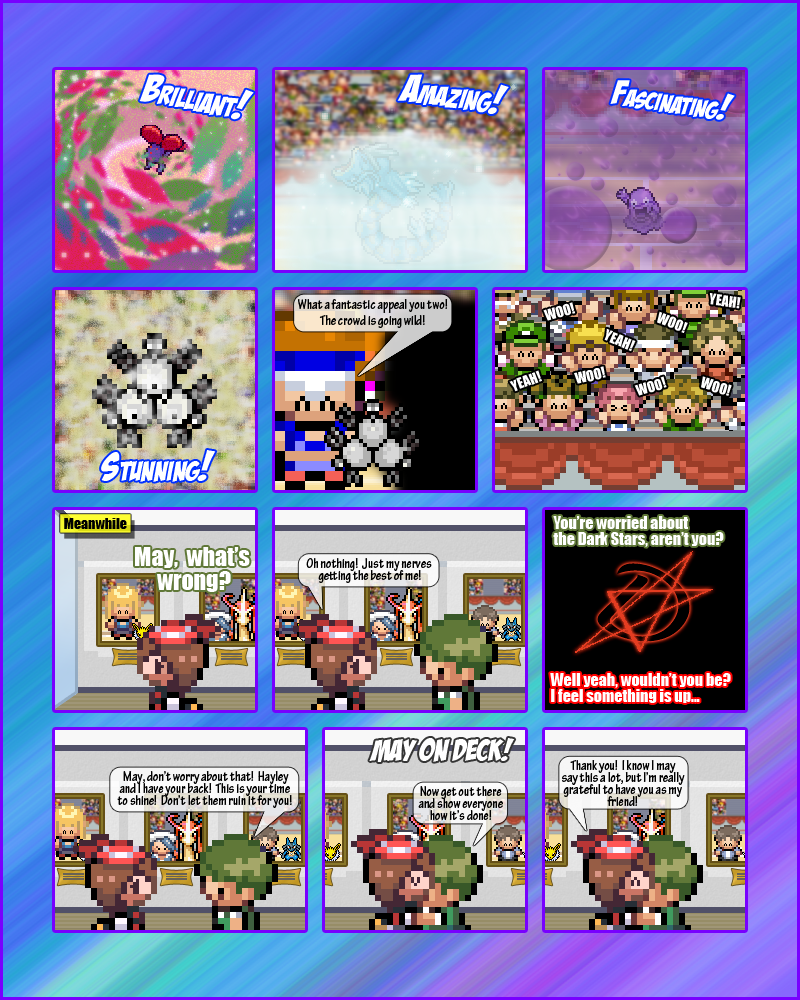 Enter mystery shadow coordinator with a shiny Magneton! Who could this trainer be?!

Also you guys get to see the “Hall of Fame” for the Grand Festival Champions! Look theres young Heather, Wallace, and even random guy trainer! Wow!

I really like how this page came out! Sorry it took so long though, last week was the most miserable week of my life! I literally had no free time at all, but I'm back! May's appeal is up next!

On a side note, i've been following all the black and white coverage. I love how it is its own separate game with no link to past pokemon until the end. I love the story line. Some pokemon are a little dumb but some are really awesome (FINALLY A WATER STARTER THAT EVOLVES INTO SOMETHING AMAZING LIKE SWAMPERT!). I also happened to watch the 2 new anime episodes, and I really think all the changes were for the better! DID YOU GUYS SEE THAT AWESOME IRON TAIL SPECIAL EFFECT!?

CQOTD - Who do you think is the owner of the shiny Magneton?
Tell me what you think?
Thanks and Enjoy!
FuzzyMuzzy~

hope you are still having a good.

hey fuzzy.I really love your comic.i only recently binged the whole thing but it was way better than i expected.i hope someday you can come back and finish this great story.have a good.

Realy liked this comic :) And beacuse of it, i was inspired to do my own :D

Is it Tuesday yet?

Since I read this comic I've only loved it more with each reading. I would love for you to finish it because as you can see lots of people LOVE your comic! I keep hoping that one day you will come back and end this comic in such a wonderful way as you started it. Really hoping you do update soon.

Im gonna read this again from the beginning..Maybe if I go through it 10 times it will update

I hate it when you leave us :(

If you don't update I will commit suicide

When it gonna be tuesday in fuzzytime?

the pokemon in panel 2 is a gayarados

When you say "Tuesday", you mean Tuesday next year, right?

what pokemon is that in pannel 2?

i would have to go with Tsutarjaas my starter... maybe the water-type... maybe

When you say "Tuesday", you mean Tuesday next year, right?