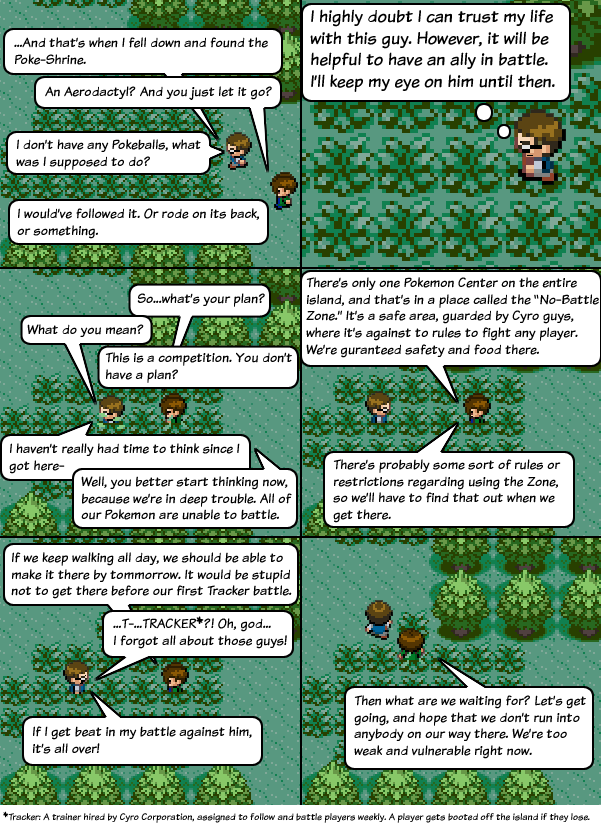 51. Remember the Trackers and Stuff?

I said it wouldn't take a month for the next update. And, while it was dangerously close, it was NOT QUITE! So…ha?

This comic has had too much non-stop, meaningless action slapped together without transition. So…don't complain about this page. Sure, it doesn't exactly add much we didn't know, but it kicks us back into the Tournament and is a good transition for this new chapter.

Also, Alex's design has been tweaked. Lighter hair and new clothes, though you can't really tell from today's side view. He doesn't look completely retarded now, so this is his new look.

You've officially not updated longer than I. Sure, I posted fillarz, but you haven't posted anything. HAHA!!!

Congrats on 6 Months of not updating:D

I'm a guessing that Jacktrack11 is Alex?

KYLE, get off your ass in the room next door and UPDATE fool!

[quote= PKMN Trainer Josh] Sessy's right, Walrus. You wouldn't know a good comic if it kicked you in the nuts! Oh wait, you don't have any... in the face, then [/quote] *sarcasm* Wow! That was sooo funny. *sarcasm*

Lawls, getting close to that 3 month anniversary of no updating Kyle. Tisk tisk, kids not making their comics these days.

Sessy's right, Walrus. You wouldn't know a good comic if it kicked you in the nuts! Oh wait, you don't have any... in the face, then

@Walrus: I bet you don't even know what "Potential" means.

It's so sad to see this comic go. It had so much potential.

btw, i forgot 2 mention, on hte first day 0 the month, the bomb's time detonater will auto-destruct, just incase i lose the detonator, but i can remotely deactivate them. oh, u think i'm kiding bout the bombs? well, i spent 2 years in an insane asylum, and let's just say my release form was never filed. don't mess with me man, don't mess with the crazies.

we gots no drawing

Now that I have break, I was hoping to get another page in before Christmas, but it looks like that won't be happening. Reason being, I still haven't finished making the No-Battle-Zone, my first custom background using tilesets. So...considering our heroes will be there within, like, 4 pages, I didn't want it to catch up until I'm done making the backgrounds. Except a little holiday filler, or something. And likely a drawing, too. To show you I don't epically suck at drawing anymore.