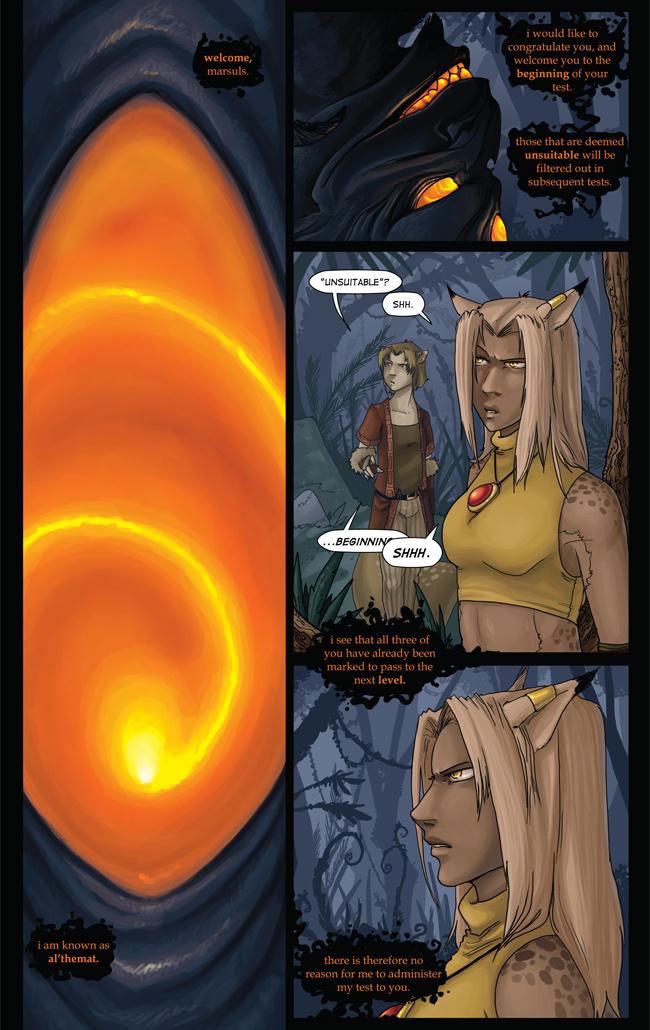 EDIT: PT is obviously on hold. The comic will be returning eventually, but I'm not going to give an estimated time right now.

I'm very sorry for vanishing off the face of the earth. Life got in, and continues to get in, the way. I'll be back as soon as I can. Thank you (most of you) for your patience and understanding.

wow. this is in the same place it was 2 years ago, the first time i read it... that was a week before my life changed forever. i came back looking for that wallpaper, damn you ahima... at least i found it.

I certainly hope this great comic will be revived in the near future. Being the patient fan that I am, I'll be waiting and watching...

It's 2010 now, and Im waiting patienty like most of your fans. This was a amazing comic. The best I've ever read, and it saddens me that its been put on hold but I have faith because its not dead yet. Ill keep checking back, as will other fans. Please come back to us ^_^

After two years I'm afraid to say I have lost faith in your return. This comic has sat at the bottom of my favorites for too long. I think it's foolish to expect a revival after this long. I want to be wrong, but eventually I will have to unbookmark you :( and that time is comming soon. I'm grateful for the comic and hope that you can find some zombie time for us. Or at least have a friend stop by again to tell us what's up. It's two years now, so I'll give you the summer... Sorry to give up :(

Two year anniversary of not updating. Please give us some sign that you're still alive :(

she's not dead yet, so we wait. woe betide any naysayers!

Please come back soon! I love your art and this comic!

Its Sad to see such a great and promising comic just run out... I have great patience with Webcomics considering they do it for free and on their free time, but usually 1 year is my cutoff, I extended it in hopes of a continuation (I saw she had done a ch 4 cover last year on Deviantart). But in 28 more days its gonna be 2 whole years since the last update and as great as this comic is, my list of webcomics is riddled with enough (interesting & promising) dead woods which is at least updates once or twice a year to warrant a place on that list to watch for the occasional update, this one isn't I'm sad to say so when May 29, 2010 has passed and marks 2 years since this comic last show signs of life, its gone.... Thanks for your efforts Silentkitty the quality of the art in PT is top notch and the story seems intriguing, I hope you some day find yourself drawn back to drawing PT or any other webcomic. Good luck. :)

You see, technically, I'm not much of a waiter... I have no patiences... But I never stop running circles around certain holes in the ground... In other words: I'm not giving up just yet! I'm just reading other comics for the time being.

Sad to see it not updated, but as always...beautiful art!

well, if she's burned out, she needs rest and recreation. In the meantime, we can wait. When she gets back, we rejoice.

Wow you have an awesome style. I love the coloring. And that beast looks amazing.

I hope she starts up soon~

Hey - SK posted in her Deviant Journal - not so positive ... shame actually - but it's as follows: "silentkitty Jan 25, 2010, 8:30:57 PM Haha, awesome. :dance: I haven't been comicing anywhere, I think I burned myself out pretty hardcore on comics. I might start up again sometime."

i miss this. favorite comic on here. so much potential!

traveled halfway around the world and still no sign of you. now if you excuse me im going to go bleed quietly in a corner hopefully you will be back before i bleed out you still get a 10 out of 5

I'm patient. I have this in my RSS feed, so I can wait for more of your awesome comic.

It happens. I am the hiatus queen. :D You'll be back and awesome again in no time.

This is Y i read Least I could do, they have a new strip EVery Day! yes everyday

(Calls out from the shadowed corner) Ollie, Ollie Oxen-free.... (Subsides in little whimpers)

PS: your art is without doubt in my mind the best on Drunkduck and i would really appreciate to see the end of the story :D