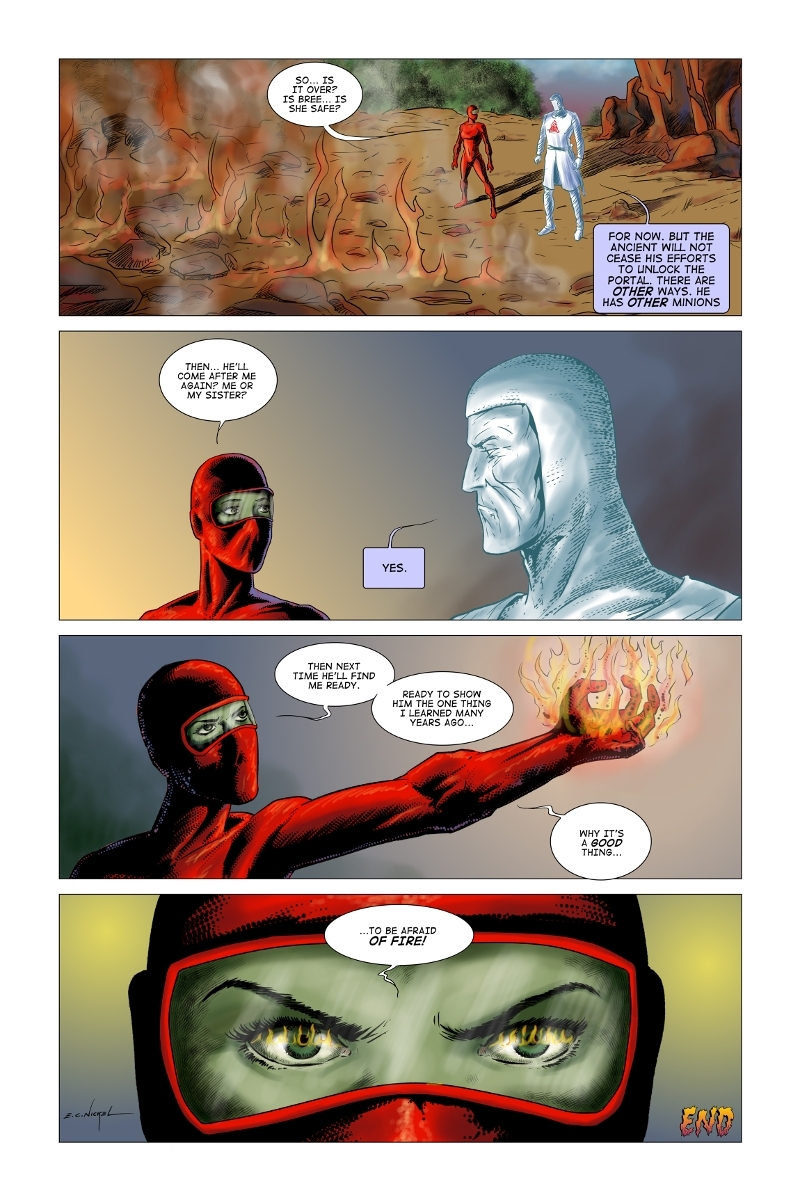 Aaaand it's a wrap! There you go, 15 pages done and done!

As I said at the beginning, I never found a name for this character which I was happy with. Nickel named her Flamethrower for the Portuguese version which he posted at his blog, but I really, REALLY wanted to come up with a play on the word “pyro”. (I failed!) Anyway, while posting these pages here, I've decided her new name is going to be Salamander … at least until I think of something else!

The whole thing was, of course, pencilled, inked, coloured and lettered by the amazing E.C. Nickel. Hope you enjoyed it!

It's back! I need to catch up!

Please do! It all starts right here: http://www.theduckwebcomics.com/Shades/5472965/

Have to check this out! :D

Yup. All done. Thanks for reading!

Yes, only so much! I could have pared down some of the early talky bits, I suppose, and gained an extra page for the final combat that way, but I really felt everything there had some relevance to the story and/or character, so it would have thrown out the overall balance. And, although the rock monster went down with one blow, he was only one minion. In keeping with the theme of powers based on the ancient elements, a longer piece would have included air and water minions, as well as more earth minions ... and there's only so many times you can blow up your flying car!

You could call her "Cinder." I don't think that's been used yet. It's a wonderful origin story. You really swung for the fences, with a Godzilla-esque rock monster! Too bad he turned out to have a glass jaw, but there's only so much you can do with fifteen pages I guess.

So, I've now got to rethink the name all over again? Thanks for that, Keith! ;-) And, yes, you're quite right about the speed of her turnabout. My idea was that - because of her pyrophobia - she'd continue to be too scared to use her power, and would only do so when she felt absolutely forced to do so. In fact, if the idea had been developed into a fully fledged graphic novel, then she obviously wouldn't achieve this level of confidence until the very final chapter!

Nice! I'm sure you naturally wouldn't have liked her to go directly to this kind of confident aggressive so quickly after her 1st trial but again... 15 frikin pages AHHHH Heh, my buddy Matt Lee that used to post comics on DD had a super hero with flamethrowing powers named Salamander. It was also a full body red suit. But that character was male. I got it! Pyro Womaniac!

@Jo: Haha! That is a superb name! I may have to write a new story, just so I can use it! @plymayer: Thanks, Paul. @Vickie: Thanks! Yes, more would have been nice. Can't help thinking the contest might have looked more favourably on this, if I hadn't crashed their car! ;-)

Nooooo, it's the end of Shades all over again! And so much sooner this time! T_T It was great to see some new work from the both of you, in any case. Lovely, efficient set-up for this character. You should have made her an Egyptian, because then I could have suggested calling her "Pyroglyphic"! :D

Nice closing line! Salamander is a good name. It was fun to see another collab from you guys. I just wish there was more.

Sorry! The competition this was written for only allowed me 15 pages! :( If it had been picked up, there were a number of elements I'd have developed further. The Ancient was obviously going to become Mackenzie's arch-nemesis, but he/she/it was never going to be seen. Instead there would be a proxy villain (or series of proxy villains), like Calder who we saw at the beginning, acting on its behalf. Mike would have become a recurring character, maintaining the flying car, and Mackenzie's sister Bree would have made regular appearances. Ah well - what might have been, eh?!