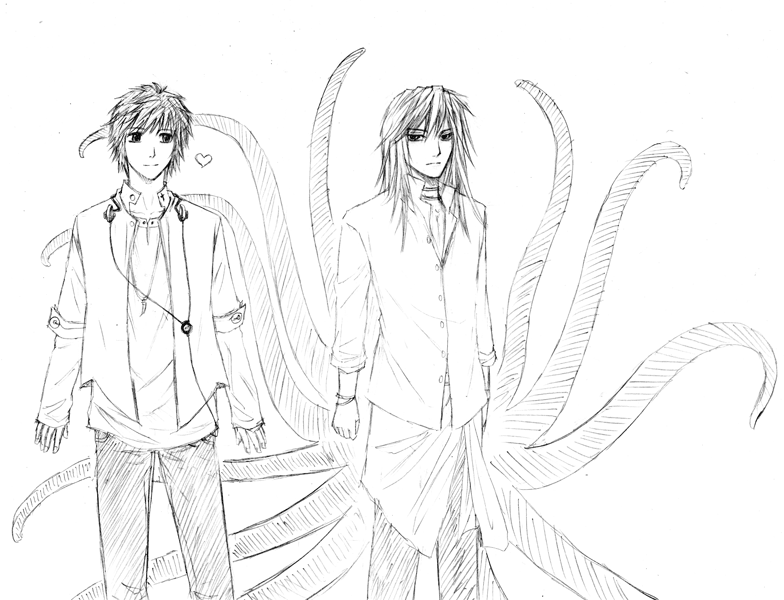 Sorry, I haven't been updating this site for such a long time due to work load and lack of rest and also heavy sickness.

It was tough trying to keep an updating schedule. I tried but a lot of things tend to keep holding me back.

Just to keep this site alive, I may post some random stuffs once in a while. Oh, if you're not into yaoi stuffs, don't read on. Else you might start puking rainbows. :D

This drawing is inspired from a really crazy dream I had few nights ago. It's a one-shot yaoi story about a guy who was the offspring of a human and a tentacle monster. Unfortunately, the guy wasn't very pleased with his newly appeared extra “appendages” once he hit his so-called “monster puberty side”. Hilarity ensued when his uncontrollable tentacles started harassing everyone in school. And one of his victims turned out to be another guy who had a huge crush on him for a very long time. And yes… you guessed it, there will be tentacle rape scenes.

This is probably the craziest yaoi tentacle rape idea that I even laughed at the thought of it. Eh, forgive me for my dirty thoughts. I don't think most people like the idea of tentacle rape in yaoi. XD

Blah alot of sickness is going around so its understandable.