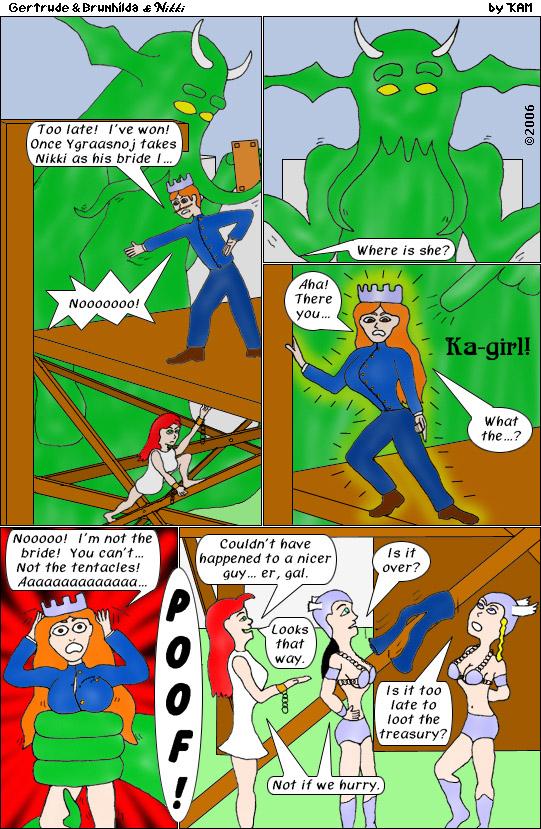 Well, at least it's not as late as Monday's.

That last panel was originally the next comic, but I decided it works better here.

I've been on Drunk Duck for 2 years.

And in Trunk news it has appeared again at Magical Misfits & Nikki makes her first cameo as well.

I guess Ygraasnoj is a fan of Anne Onymous' work? (Good thing he didn't take *her* as his bride!)

Seemly he is into larger breasted girls. :B Naughty Demon. xD

Thanks all. I'm so used to people guessing my surprises that I'm genuinely surprised to find out I've surprised people. So what did people think I was going to do? Killerfurby - When I first drew 'his' breasts I thought, "Those are too big", then I realized this was a sexist demon & drew them bigger. ;-)

Nes: those are some massive tits. I lawled :)

Mwahaha! That'll teach a red haired man to not provide demons their sacrifices ^_^

You bamboozaled me on that one too. Had fun drawing Nikki! Pretty girl in a bikini whats not to like.

Ka-Girl? Somebody has taken lessons somewhere? ;-) I almost had to leave the office to laugh this one out! :P Well, if you fail to provide, demons tend to make their own sacrifices, especially tentacled ones! :P Excellent Top Nice one KAM!