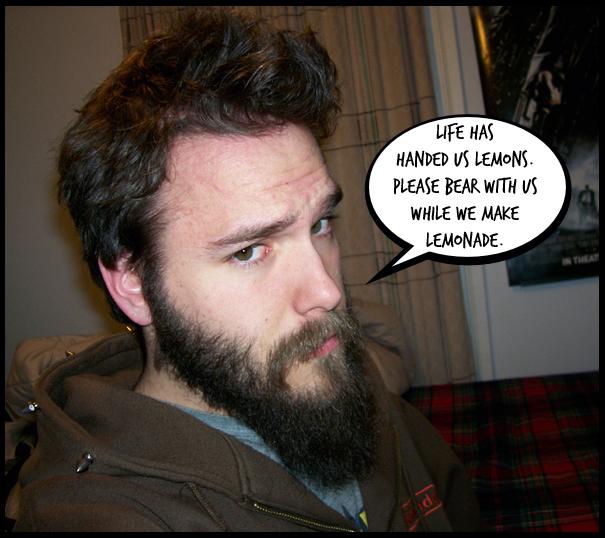 I know it's been a while, but we assure you that we're not dead… At least I'm not… Dave?

guys its on his site, hes updated recently in fact.

he stoped updating on duck head to his site

Good heavens this comic is great - I'm recommending it for what it's worth, so hope that lemonade gets made soon!

Oy, Ben, are you still alive? We are missing yoo!

Due to lack of patience with the ridiculous amount of glitches on this site, I am no longer updating here. You can see the continuing adventures of Zom-Ben here: http://www.zombenstrikes.com

Lemons = natural diuretic Enjoy the fat and toxic flush boys while I check out your archives until you return XD!

You have some serious skillz to draw Zomben just like yourself! And only make lemon merangue pie. It's yummeh. Or lemon cheesecake!

AT LAST A MAN WITH A *BEARD*! Ill look onto more comic, pics, and whatever you post. =3

This is full of excellence on some kind of scale I can't even begin to comprehend. Have a 5 and my love.

That is some awesome hair. I want it.

Or, make lemon pledge and clean the damn place! damn kids... but seriously. I miss my zombie action, but I'm patient.

Or if you find lemonade unpalatable, you could always hurl those lemons at hobos until they explode.