(online) posts: 3,003 joined: 3-15-2008
kawaiidaigakusei and I have been doing newsposts for a while now, so we have put together a set of guidelines that should make it easier to DDers to know how to get their news on the front page!

Please leave any feedback for us here! ^_^

How do I get my milestone/other news in a newspost?
You can send a PQ to HippieVan and/or kawaiidaigakusei, or email us at hippievannews@gmail.com and/or kawaiidaigakusei@gmail.com.
If timing is important to you, kawaii does Monday newsposts and HippieVan does them on Friday. Otherwise you can send your news to either or both of us.
We don’t have any way of tracking milestones on our end, so if you want something in the news it has to be sent to us!

What kind of news should I send you?
Just about anything related to DrunkDuck, webcomics, or comics in general that you think other DDers might find interesting! If in doubt, send it along anyway – the worst that will happen is we won’t end up including it in the newspost.

Some examples of things that are “newsworthy”:
- A comic milestone
- Having your comic published/printed
- Running a kickstarter for your comic
- Winning an award/being featured/interviewed elsewhere
- Running a contest for your comic
- Community projects! We love to promote these!
- Other interesting news from the webcomicking world

What is a milestone?
- Completing a comic
- Page milestones by 25s (so the 25th page, 50th, 75th, and 100th could all be separate milestones) or chapter milestones. Either of these is fine, but please only choose one to send us.
- Anniversaries by year

What won't we put in a newspost?
The things that we exclude from newsposts are basically just the things that happen too frequently to be newsworthy: namely new comics and going on/coming back from hiatus.
We will make an exception if these can be “piggybacked” onto another milestone. E.g. You have completed a comic and are starting a new one, your comic is coming back from hiatus and is hitting 50 pages, etc.

How will my milestone be featured in the newspost?
If you just let us know about a milestone and don't provide us with anything else, generally we’ll use your comic thumbnail and just say something like “(Comic) has reached 100 pages!” At our own discretion we may add more to this.
If you don’t want us to use your comic thumbnail, you can send us a banner up to 395px wide by 125px tall. You can also send us a short write-up about your comic or milestone, around 50 words or so.

Hey! That person's comic milestone got a bigger picture/longer write-up/was more visible in the newspost than mine!
There are a couple reasons this might happen. Extra special milestones - like reaching 1000 pages - may be featured more prominently.
The other thing to note is that milestones typically go at the bottom of a newspost. So if there isn't a lot of other news one week, the milestones will be closer to the top and may seem more visible.

A lot of this has been taken/adapted from skoolmunkee's old newspost guidelines, so credit to her!

———————–
Here are some guidelines to posting in this board as well
1. Keep it clean, or warn people - If your comic or whatever you're showing off has some NSFW content, mark it as so. THINK OF THE CHILDREN, DANG IT!

2. Be nice - Don't be going and posting things like “OMG your comic is lame PLEASE DIE IN A ROADSIDE DITCH AND DECOMPOSE” in other people's topics. It's okay to provide constructive criticism, but flaming is a no-no. Be respectful, people.

3. NO SPAM - Okay, I lied. This one's a rule. If you're advertising anything that's spam (ie. free iPods, or online poker, or eBay auctions) then it'll most likely get killed on sight. We won't get mad if you're like selling a print version of your webcomic, or something other that's legit, but be reasonable, kay?


4. Clear topic titles - Do everyone a favour and name your topic with a meaningful title. “LOLZ NEW OCMICZ” is not descriptive, and will most likely be changed by me to something better. You'll also be doing yourself a favour by bringing more readers in.
Duchess of Friday Newsposts and the holy Top Ten

(online) posts: 28,156 joined: 1-2-2004
Advertise with us!
It costs $2.00 US a day for each position. You get unlimited impressions in that time and your ad is displayed to every region equally, unlike Project Wonderful where you had to pay for each region separately.

Pay $2.00 US here at paypal, link to your ad image and make sure to tell us where you want the link to go to:
- https://www.PayPal.Me/Drunkduckwebcomics

You can also contact me here:
https://www.theduckwebcomics.com/quack/compose/?user=ozoneocean
If you want your ad up for more days then pay in multiples of 2: 4 days = $8, 20 days = $40 etc

These are the ad sizes: 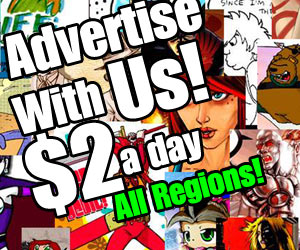 Hi everyone! The rules for this section of the forum haven't been updated since 2006 and to be honest we haven't been keeping an eye on it very closely, so I thought I'd update them just a little bit.

Some of these are guidelines rather than hard and fast rules, but do try to keep them in mind when promoting your work. Basically just use your common sense and don't be an annoying spammer! :)

1. All plugging of your work MUST be done in the “Meet, Greet, Show and Sell” sub-forum. The other sub-forums are for discussion, so please don't make threads or comments that just plug your comic in them. Obviously you can still talk about your comic! Just no blatant “read my comic” threads/comments outside of this section.

2. What can be plugged here? Well, it doesn't necessarily have to be a comic on DD. You can definitely hype another project that you're involved in, or a comic that you've published/posted elsewhere! However, if you're plugging something other than your DD comic, ideally you should be an active user of the site - meaning that you post/have posted your own comic here, or participate actively in the forums or community projects.
Obviously, whatever you're plugging should be at least tangentially related to art, writing or comics. Use your discretion here, but I mean just don't sell fake designer handbags or anything and you'll be fine. :)
Also, avoid posting about something that doesn't exist yet e.g. an upcoming comic. But if you want to plug a comic with only one page, go for it! Just be aware that you probably won't get a good response until you have at least a handful of pages.

3. No more than once a month - To keep a fair and level plugging ground, try not to go around advertising your comic more than once a month. This ensures that everyone gets an equal chance to show off their stuff! If you have multiple comics or projects, you can make a thread for each one. However, you're welcome to reply to your own thread in order to bump it, as long as you've got something to add (like that a new page is up) rather than just a reply like ‘bump.’

4. Keep it clean, or warn people - If your comic or whatever you're showing off has some NSFW content, mark it as so. THINK OF THE CHILDREN, DANG IT!
5. Be nice - Don't be going and posting things like “OMG your comic is lame PLEASE DIE IN A ROADSIDE DITCH AND DECOMPOSE” in other people's topics. It's okay to provide constructive criticism, but flaming is a no-no. Be respectful, people. Also, no critiquing in PLUG topics.

5. Clear topic titles - Do everyone a favour and name your topic with a meaningful title. Naming your thread “Check out my new comic!” is not descriptive or helpful, and is not likely to bring many readers in. Try to include the name of your project and/or a short description in the title!
6. No critiques? - If you're one of those types who's just plugging for fun and profit, then please write (PLUG) before your topic title, so everyone knows not to dissect it. If you want critiques, then put (CRIT) before the title. If you could care less, then put nothing. (You can of course put (PLUG/CRIT) if you're open to any kind of response.)
Much of this is lifted directly from lukee's old guidelines, so credit to him!