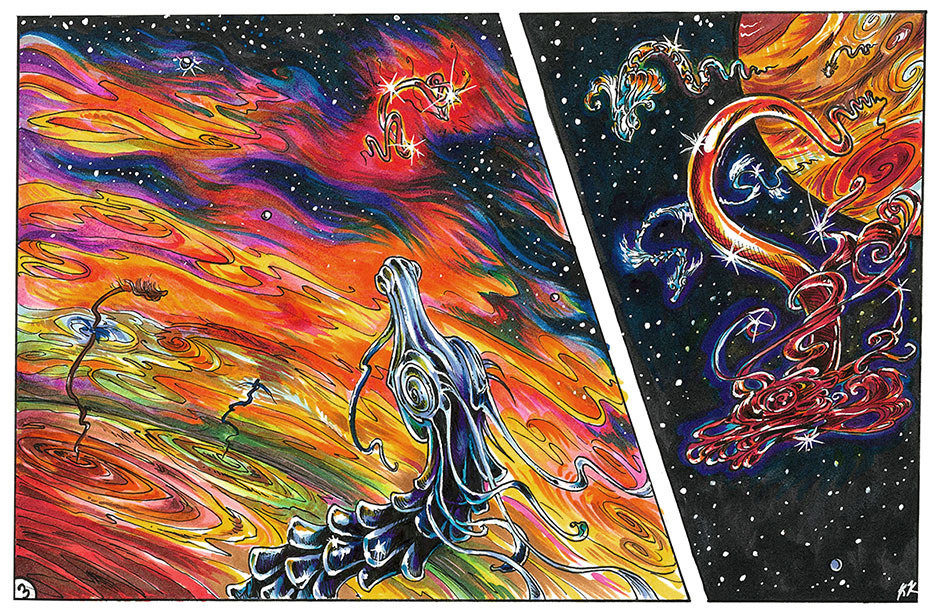 Electricity Is Her Element is a sci-fi fantasy webcomic about dragons from Jupiter who convene to plot the return of chaos to the universe. It was done entirely in Prisma markers (some watercolor here and there). I'd love to hear your feedback and I hope you enjoy it!

(offline) posts: 7 joined: 5-8-2014
Thanks to all who commented before! I'm so happy you like Electricity is Her Element!!

I'm posting to let you guys know that I'm throwing a KICKSTARTER for this comic in SEPTEMBER– https://www.kickstarter.com/projects/katcrow/electricity-is-her-element

There'll be an all-new printed version with more pages and a sweet book-like binding and satin pages and an art print & signature and all the trimmings.. Also, because I consider this the official LAUNCH event for this book, maybe the sole publication event this book will ever have, I've designed an enamel pin- because I love pins in spite of myself and I suspect you may too- a red dragon pin to commemorate this occasion.

(offline) posts: 7 joined: 5-8-2014
Hello again folks!!
A quick note to say the Kickstarter campaign comes to a finish THIS THURSDAY at 7pm EST! Last chance to back the campaign and be part of my “Official Launch Event” for this comic! https://www.kickstarter.com/projects/katcrow/electricity-is-her-element

The campaign has been an amazing success, currently funded at 108% and, just as important, gotten the word out and this comic was written about in several publications:
Comics Beat
Women Write About Comics
Graphic Policy
For the Love of Indie
as a result of the campaign :)

Those of you who've run Kickstarters before likely know how much work it is and I am beat but very glad that I made this campaign happen during the #smallpressbigideas spotlight month on small publishers and I'm really glad that I got the chance to spread the news further about my work to those interested in hearing. The 2nd printing of the comic is going to have a square “book-like” spine, and also I've designed an enamel pin to accompany the book :)
Thanks again to the Drunk Duck community which has been so supportive of this comic since the start, I look forward to uploading more content here soon, the support I've gotten here is one of the reasons I felt motivated to pursue a Kickstarter for the comic :)
Have an amazing week!
https://www.kickstarter.com/projects/katcrow/electricity-is-her-element