When I started working on my comic, I was mimicking a lot of anime conventions, and one gimmick I found fun was using objects associated with a character to emphasize that character's traits and embody his personality. I noticed it first with vehicles (in Lupin III first but many series are vehicle-obsessed). A character's car (or space vehicle or whatever) is an extension of his personality. You can immediately recognize it, and if it seems mismatched to its owner, that stands out. In JRPGs, it is often a weapon that connects to the characters' personalities and roles.

Once I noticed, I saw “amplifiers” everywhere, not just in Japanese creations or animation. In a story about pets, the breed of animal links to the owner's personality traits. It could be the characters' shoes, backpacks, bowling balls. Some are more subtle than others.

I've used “amplifiers” in Used Books whenever possible. I started with wardrobes, weapons, and vehicles. Then pets, agonizing over what a certain breed would suggest about the owner. Any time I show someone's home decor or possessions, I consider them a physical, visual extension of the character. It has become a favorite little graphic-writing obsession to put details in the background that reveal or reaffirm truths about characters.

Anyone else do this kind of thing deliberately like I do? Or do you find yourself doing it unconsciously?

(online) posts: 27,520 joined: 1-2-2004
I think we usualy give our characters things that suit them. I never thought about it being an amplifier. true though because they're extensions of the character.
We don't often do that in real life because the things we surround ourseleves with are fluid and changeable. But sometimes we have things that characterise us.

(online) posts: 3,248 joined: 2-24-2007
We sort of do it in real life, even if things change (we change too). If you drive a truck or a compact car or your room is filled with movie posters or you have five rotund cats – it all says something about you. I had a friend in school who always wore top-of-the-line basketball shoes and drove sports cars (from his dad's used car lot). Knowing just those two things, you've probably formed an impression of him.

In prose, sometimes I like to describe a character's home or possession(s) before introducing the character. It creates an impression for the reader. In comics, it's a bit different because I can simply fill the environment without drawing attention to things.

Using scenery/backgrounds like that has become a tool for me to add character dimension without taking up time. For example, a character's personal hobbies may never enter into the story, but if there's a violin case beside his work desk, it creates a new aspect to the character.

It's a technique I've found really fun and unique to visual media in a way that just doesn't translate to prose. In any environment, I try to think of whose place this is and imbue it with his character. Or in the city, which neighborhood? Who lives here? And give it the neighborhood character. 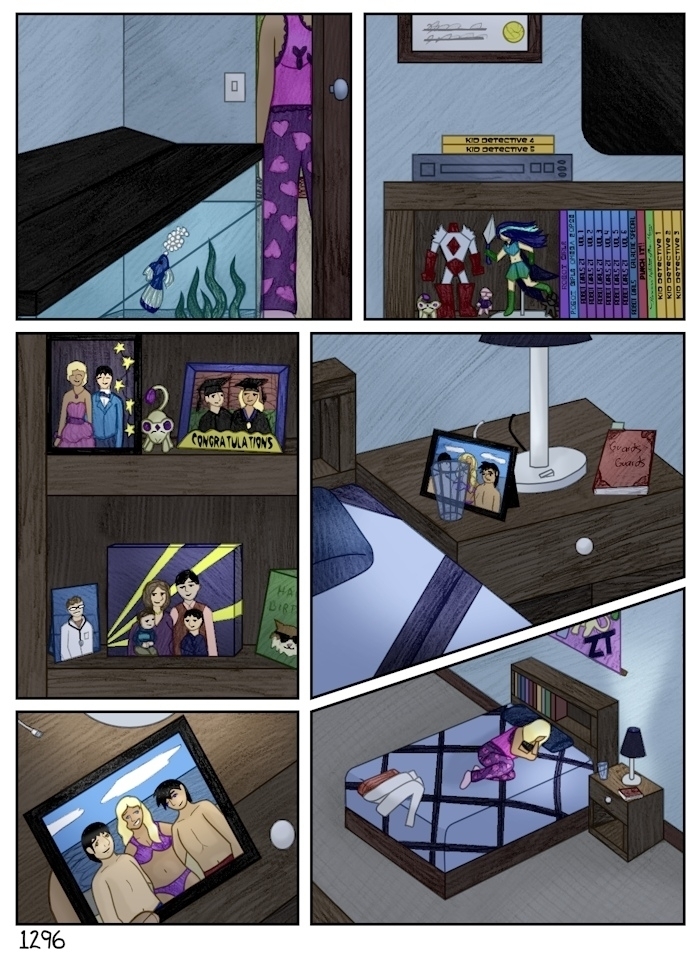 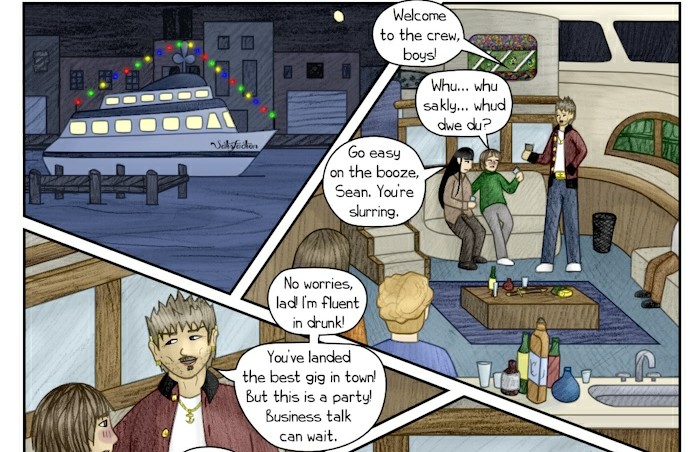 Remember the old art class assignment about doing a collage of what describes “you”? Think that. Each thing in there “amplifies” , “solidifies” your image of yourself. It describes your priorities, loves, passions, and reading between the lines, the things you don't like.

And a complete mess of competing images can indicate a scatterbrain. An organized representation of the same images could represent a polymath.

Another valuable aid for character building and characterization.

It can add color, often literally! (Belle's favorite color is pink, so she wears it a lot. Trisha's husband Sam is very shy but a flashy dresser and so on.)