Figuring Out Dating as an Introspective Comic Nerd 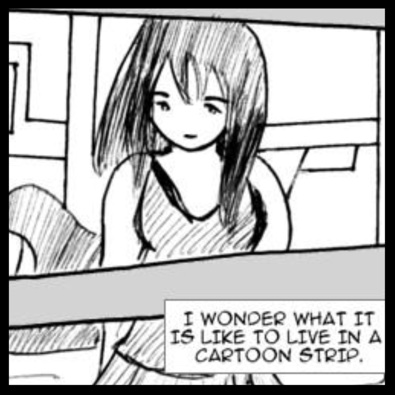 (I drew this in my comic ten years ago.)

I am going to broach a subject that we do not openly discuss in the forums, or at least is lacking an open channel for discussion: Dating.

The first time I ever saw an effort to blend nerd culture with dating was at the Ottawa Comic Con where there was an actual Speed Dating booth set up at the main entrance. The idea behind it was innocent enough–people with the nerdy fandom could meet other people with the same interests as them.

When I was eighteen, I scribbled down a rough timeline of major life milestones. Back then, I believed that I would get married when I was between 25-27 years old. Five years after the higher part of that bracket and I have let years on the dating scene slip between my fingers…until recently.

I have somehow stumbled into a very consistent and uncomplicated situation with a member of the more masculine sex. It began simple enough-I had a car and he needed a ride. Then I needed to stop for gas and then he cleaned my car's front and back windshields for me. As a single person that has been mostly independent for a majority of my adult life, that small traditional gesture really stood out, and gave me a reason as to why people willingly enter into partnered relationships.

It feels like I am treading very unfamiliar water. Whenever I suggest a place to eat, he agrees; When I suggested an overnight staycation in Downtown LA during the Thanksgiving Holiday, I was given the green light; When I trust him with the keys to my car, we get to our destination while I ride shotgun.

I do not feel the need to tip-toe over what I need to say like I am walking on eggshells. I can feel completely comfortable in the moment and when he asks for the check at the end of the meal and says, “I got this.” I can not help but smile as I drive all the way back home.

Congrats Kawaii! I'm not the dating type, but I have 10 years of marriage (I'm 34) and every day, we learn from each other :D

I've been in a stable relationship for 9 years now (anniversary is tomorrow actually). We've been together since we were 18 but we were close friends before that. Every "milestone" we've hit has been a natural progression rather than, "Here's your benchmark, time to hit it." At the end of the day I feel like I just got really lucky. He's the sweetest man to not just me but those around him as well. Every day I'm proud to know him. (Sorry got a bit sappy there). I've never been into the idea of dating. I figured if you're open to things happening but just be yourself in the meantime it'll all work out. She'll be right so-to-speak. There's nothing fundamentally wrong with dating yourself.

lol I never had trouble with getting dates, relationships, marriages, etc., going. It's the soul-shredding breakups and divorces that nearly did me in! But I didn't give in to bitterness, and finally thought rationally before jumping in again... and now, 13 years later, seems I got it right this time! :D

Aw. That's sweet. Congrats! I'm a bit sentimental following other people's love stories. When I was younger, I was somewhat hopeful and interested in having my own. But no one was interested and I was always a little afraid to ask. As an adult, my biggest accomplishment has been being able to admit crushes to male friends (also not interested, lol). Thank God my last crush ended. It was annoying to feel like that, like a mental illness. Anyway, never dated and any interest in it is gone. To be honest, I only recently started liking myself, and I have no need to share me. As for my type, I've been perceived as a biology geek and various film/TV lover (not many modern ones, though). I enjoy geeking out with coworkers.

Congrats Kawaii! :D At heart I'm more an arty type than a nerd type. I can fake it fairly well... till it comes to details. I know a bit about some animes and star trek but nothing about games, Disney, popular comics, comic based TV series, modern Dr who, Game of Thrones, Vikings, any of the latest Scifi TV series and only a few of the Marvel movies. It quickly goes over my head... There aren't too many arty people into webcomics and Napoleonic uniforms out here so I had to be adaptable. I gave up dating as one of my new years Resolutions though and I've stuck to that pretty well! I've just been having fun instead.

Dating is dating regardless of nerd status. Having troubles with mating behavior is quite normal. And then you meet someone you totally bond with and barely realize you are. A odd sense of fulfillment.