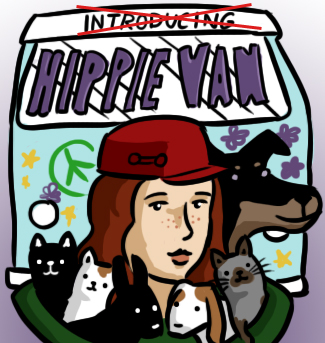 Hey everyone! And farewell, also.

When I started writing this newspost I went looking for the first one I ever did. It turns out it was in November of 2013 - that’s over three years of Friday newsposts! I don’t think I’ve ever kept a paying job that long, even.

This is the first proper newspost I did. As you can see, it’s pretty different from what I do now – just a couple milestones, really. As time went on, they became a lot more. I realized fairly quickly that there wasn’t always news to tell you guys about, so I started filling the gap with blog posts talking about comics and art. Then I noticed that people commented more when I had a nice image, so I started drawing something most weeks. At the time, I was about halfway through my BA and newsposts were like a mini-vacation from schoolwork every week. I always looked forward to having the chance to write something non-academic every so often.

I was always so nervous when I first started doing newsposts! It's silly, but I really was. I would always check the front page first thing when I woke up Friday morning to make sure everything had gone smoothly and people were enjoying what I had written. If there's one thing writings these newsposts has done for me, it's learning how to be confident in what I've written - or at least not to care quite so much if everything I put out for the world isn't as absolutely perfect as I'd like it to be.

Nothing terribly drastic has changed in the meantime - in fact, if anything I'm less busy now than I was then - except that I've gotten tired. I've never considered myself to be a writer, really. I mean, I think I'm a good historian. I think I can put together cogent arguments and convincing analyses. Ask me about Dostoevsky's position in the Russian nationalist discussion some time! Writing for entertainment is pretty different, and I struggle with it every single week. Every Wednesday I say “I should really get my newspost done early,” and then Thursday I say “I guess I better do my newspost,” and then at 1am on Friday I say “Jesus Christ I have to get this done before I go to bed, what on earth am I going to write about?” The next week the pattern starts again. Every week I swear it's the last week that I'll be able to come up with a topic.

Basically, what I'm doing now isn't as good as what I was doing before, and I'm not enjoying it as much. It's time for me to pass on the torch to someone bright-eyed and bushy-tailed who can give you all the attention you deserve.

The important stuff:
First of all, I'm not leaving DD! I'll still be in the forums, participating in community projects, and maybe even occasionally updating my comic. I can still help you guys out with general admin stuff too, although there's a lot less of that to handle now that we've fixed so many of the site's major bugs. :)

Secondly, of course, you can't send me your milestones and comic news any more. As always, you can send your news to kawaiidaigakusei who does the Monday newsposts.

Finally, Thank you all so much for reading and commenting on my newsposts over the last few years! The front page is a million times better than it used to be, and it makes me so happy to see people engaging with my newsposts and now, the posts done by Banes, Kawaii, Tanz, and Ozone. I hope you've all enjoyed my weekly comic ramblings. :)

Thank you for everything you have brought to the groups. I loved your news posts and the unique thoughts you brought up to create conversation. So glad that you are staying at DD. Cuz that means you can be a guest writer from time to time!!!

You've been awesome, Hippie! I will miss your stuff. I shouldn't have lurked so much.

I'll miss your newsposts, for sure! I never had the impression that you ran out of ideas, on the contrary I've always been amazed at the seeming ease with which you regularly came up with something genuinely interesting. Thank you so much for all that commitment you put into this!

@KimLuster: Thank YOU! I think you've been my most consistent reader/commenter!

@bravo: Thank you! It's nice to feel appreciated. :)

@oz: I always loved when you guys did quackcasts based on my newsposts!

@usedbooks: Always the hardest part! I feel like I ran out of ideas about two years ago and have been scrambling ever since. :P

@Ironscarf: "Effortlessly cool" is not often a term used to describe me! My self-description generally falls more along the lines of "giant dweeb."

@Banes: I'm glad to have inspired you! I think you took what I was doing and made it 10x better!

I'm not sure I'd be able to come up with a post every week (for years!) Very impressive. We'll miss your posts.

Thanks for all the work you've put into these post Hippie, they were always worth reading. You even know how to bow out when you're at the top. How can anyone be so effortlessly cool?!

Thanks for all your hard work =) see you around!

These posts will be greatly missed. Actually, your posts about love triangles, Mary Sues, sarcasm, and so forth are what showed me what I wanted to do with newsposts - so thanks for the reading pleasure AND the inspiration! #sadday

Thanks for doing all the news posts! Good luck with your future endeavors.

I really did enjoy your posts, Hippie!! Thanks for giving a season of your time and talent!!

Noooo, you can't go. I need my weekly dose of HippieVan! You'll be missed. As for bright-eyed and bushy-tailed nor on this site and certainly never on the front page! ;-D

Awwwwww T_T I will miss your voice from the front page Hippie and miss stealing your post ideas for Quackcasts too :) It's been amazing seeing your grow up with DD and becoming more and more confident till you were basically in a leadership role.