Some More Stuff on Dialogue 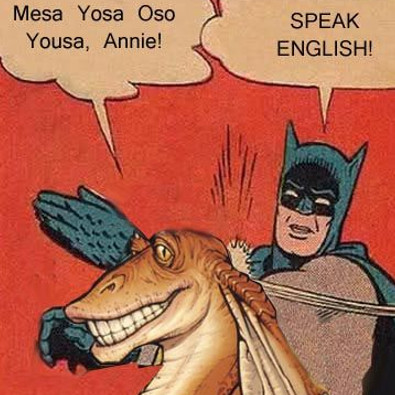 So last week I talked about the basic principles of dialogue, so the recipe to the cake itself. But now I’d also like to talk about that cake’s icing and trimmings- what will make the dialogue we’re writing be fun and distinct and pop in our comic just like our art (should) be.

So you now have a pretty smashing segment of dialogue by using all those universal tips from the previous article. What more can you do before you can be done tinkering with it?
Well…

1. You can consider accents.

Our speech doesn’t sound the same, even if we all utter the same sentence. A big part of this differentiation is simply an accent (anyone who has heard me at the quackcast can easily attest to that).

Writing an accent into your dialogue isn’t hard, because as I said before dialogue is only a simulation of realistic talk, not an actual representation of it. Therefore, to write an accent you have to consider two things: keep your text readable and keep your text consistent.

If y’distert th’text tah mats, yar makn yar ridrs deceefur it.
That will throw them out of the swing of the story you’re telling in your comic.

See how Hergé is doing exactly that (but for comedic purpose) for the made-up language of the Arumbayas in Tintin and the Broken Ear: 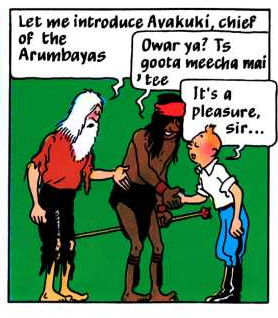 But if ye pick jus’ a coupla word t’remind ‘em that yer character’s speakin’ in an accent, then yer just makin’ it so they’re hearin’ it as they read, without any problems decipherin’ it while they do.

And what I mean by consistent, is that when the accent is specifically weird or alien or exotic, pick just a few frequently occurring words or recognizable syllable that you distort, and stick to only distorting them (helps to pick them if you read the phrases out loud), rather than more words in your text. Your readers will learn to recognize the distortion without needing to decipher it in every balloon they see. Ah tell ye, this here thing can be th'funnest lil' trick fer ye, Ah've tried it a gazillion times n' it works, Ah guarantee it!

Consider having some turns of phrase be specific to a character, such that they become a ‘signature’ of your character’s personality, background or general upbringing. That is not only going to make your character more distinct from the rest of your cast, and your cast in general feel more alive and more 3D, but also it can serve you for dramatic effect, for that precious moment where the character drops that speech pattern for whatever reason.

Again Hergé is a master of this: For example one of the main characters in my novel trilogy never uses contractions in his speech. He is an exacting, pedantic upper class control freak that loves to make everyone else feel inferior and he has an insane level of need to be always perfect and immaculate. So when several chapters down the line he loses it, the contractions in his speech are the first thing to go as well, and the effect is quite jarring- it really feels like the situation is suddenly more serious than it was a moment ago.

3. Consider aiding the tone and pace of the dialogue with your comic balloons.

I am not talking only about placing your balloons in such a manner in your frame that they guide the eye smoothly through your comic page (which can be far better analyzed by other newspost posters than me), but about showing off the feel of the moment with them.

When someone interrupts or talks over some other character, it might be dramatically appropriate to demonstrate that by having that character’s balloon overlap with the one of the someone that got interrupted. 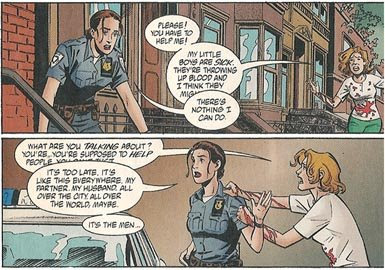 When someone talks but is being ignored, it might be more visceral to have his lines and balloon overlapped by the characters ignoring him/her entirely, not just their balloons.

A wall of text might demonstrate how the character emitting it is imposing himself on a subordinate character.

When the tone of the speech is extreme enough, it might even make the balloon look different.
It all serves to make your dialogue, and consequently your characters’ voices, be in higher relief and dramatically (or comedically) impact your readers more.

From Asterix and the Soothsayer

So what do you think? Have you used any of these trimmings? Do you have more to add to this list? Inquiring minds want to know!

The Dark of the Sith Jar Jar, he who was behind everything, has the patience to tolerate such abuse.

Fascinating advice! I like that overlapping balloons technique;been meaning to try it!

This has nothing to do with the topic..but..I used to send in $1.00 for a years subscription to Batman and Detective(starring Batman)comics back in ancient times...

Excellent tips!! (seems like everyone is on a roll with wonderful advice lately!!!)) I've tried some of these tricks in the Godstrain but some I've never even considered!! Nice!!!

I like that accent tip! That makes the application of the idea a lot easier. I hate when you're stuck having to decipher text. Tone is really hard to get across in comics, but it CAN be done, as you've shown with the bottom two examples.

You can also play around with your typefaces. In Pogo Walt Kelly would have P.T. Bridgeport speak with letters used in circus posters, since Bridgeport ran a circus. It can have drawbacks, though. Two of my characters used to speak in different fonts, but one font was small and the other hard to read, so I dropped it for clarity.