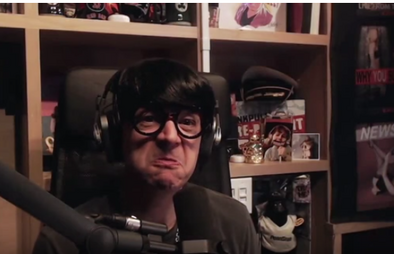 Sometimes I love them. They can make me howl with laughter these days - but I find it's important to be careful with them.

Where was the first place I heard and ENJOYED bad jokes? David Brent of the original “The Office” is the first guy that comes to mind, but he certainly wasn't the first. Some of the “bad comedian” pieces on Seinfeld, with the lame guy “Banya” or whatever his name was, made me laugh (but in the correct way, where I KNEW the jokes were bad and laughed at the badness).

…maybe Fozzie Bear was my earliest experience with this appreciation of the Funny Unfunny. I knew his jokes were bad, and that many of the variety show bits were failures-on-purpose.

There were some bad jokes (along with brilliant subversion) in MAD Magazine, but I don't think I fully understood what was what when I first read those.

Anyway, some of my biggest laughs in recent times have come from ‘bad’ comedy.

Bad jokes have to be done in the right way. I've tried doing “bad on purpose” jokes and they've gone okay sometimes, but sometimes they just come across as BAD. And some people are laughing at the surface level joke, which horrifies me. No judgment of my “audience” - they could just be laughing because they're nice. Or they appreciate the effort.

Or maybe they DO understand the badness is on purpose. But I regret the image I might be creating of myself - that I'm a lame, “dad-joke”-telling so n' so.

By the way, I believe that Dads take up “dad-jokes” because they're trying to make their LITTLE KIDS laugh! Stop slamming the dads! And when the tykes get old enough to start rolling their eyes at Dad's puns, they don't realize that their patriarch ruined his awesome sense of humor years ago for THEM. Ungrateful little–er. sorry. Tangent.

Apologies for the rambliness of this post. This is what I've been thinking about lately, anyway…

Do you feel what I'm saying? Do you find the unfunny, funny? If so, when is it awesome with deep levels, and when is it…just lame? Or is it something you just have to ‘feel’?

Have a fine Thursday, and remember, my lame jokes are actually brilliant!

KL - I liked those jokes from the president in your comic! The context of the jokes were so not-appropriate to the situation at hand and he got stony silence from the gathered officials. Very funny stuff! XD

Yeah, I had the President attempt some lame jokes in my recent Godstrain Epilogue - it does feel very hit-or-miss sometimes...! If you wanna see a truly awful (as in horrendous) stand up comedian that seems to make people laugh despite (or probably because) how terrible he is, look up some videos of Kenneth Keith Kallenbach (he made appearance on Howard Stern as well as night clubs...)!! Sadly, he passed aways in 2008, but his 'comedy' lives on!! Great article!!

The oldest sitcoms were full of spousal abuse and/or racist jokes. They have other stuff that's great but enough sexism, abuse, and racism to make most moern viewers uncomfortable.

"The Carry On films have aged badly"... YOU TAKE THAT BACK !

The Carry On films have aged badly and so have Benny Hill, but some of he sexy, bawdy jokes are still funny because they're so bad and lewd... I think Skreem or someone else did a comic in hat style, with bad, bawdy jokes, and it works.

I was thinking about the Gong Show the other day and how it was one unfunny funny bit after another but it was all supposed to be that bad. Mean Gene the dancing machine, the Unknown Comic -- . And MST3K where somehow a lame joke about a lame movie becomes the funniest thing ever because of the context.

Most humor is very specific to time, place, audience, amount of alcohol, etc. Like star dates. Humor changes depending on your position in the galaxy when the joke is said. Funeral joke are not funny at a funeral (sometimes they are). Some of the funniest stuff from the 70s would be racist or sexist or even criminal today. Funny, unfunny? Maybe.