Character Development and a Captivating Storyline OR Stunning Graphics? 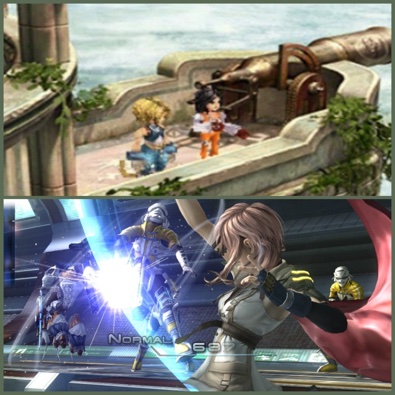 One of the main influences of my art style comes from the Final Fantasy video games of the late 1990s and early 2000s. I remembered being mesmerized by the full orchestrated score by Nobuo Uematsu, I loved going on adventures and living vicariously through the characters and the storylines and subplots were layered and engaging.

I have fulfilled a decades long goal last week and purchased Final Fantasy I, II, IV, V, VI, VII, VII, VIII, and IX for the original Playstation. After one hour of game play, I realized how much I missed the Final Fantasy games from two decades ago. Granted, when I see the graphics from the Final Fantasy games I used to play when I was twelve, I wonder if my eyes just glazed over the rough edges or if I had a better imagination when I was younger and smoothed out the characters' designs. Regardless, I believe the lack of emphasis on high definition graphics allotted more time to focus on the plot.

I have tried to play through FFX and FFXIII, and each time I am in awe of the amazing graphics and I roll my eyes at the annoyingly revealing clothes of some of the characters (cough*Vanille*cough). Another thing that bothers me is the grotesque high definition images of monsters. My least favorite part of the more recent Final Fantasy games are the voice actors because I enjoyed making up voices in my head and the conversations were mostly in text bubbles, like in comics!

Is it even necessary for modern video games to strive for graphics that resemble the CGI/FMV cutscenes from the early games? Would a video game with an original story, well-rounded characters, and reduced image quality be more enjoyable to play than a game with a lame exposition, one-dimensional characters, and stellar graphics?

The Final Fantasy series is a classic, but I think the last 'good' FF game was FFIX before the developers went into the 'cinematic feel' and throwing charm-lacking characters here and there. Plus, the story went almost lineal which I think is the weakest point of the latest games. FF III (VI in America), VII and VIII are, in my opinion the games with the most believable story and characters.

A good example of good writing trumping graphics is Undertale. That game had me in tears by the end but the art was done completely in pixels. It's a matter of balancing characters, writing, music and graphics I think. :)

I love the old style JRPGs from the 90s. My faves were Shining Force and Land Stalker. Landstalker was an isometric perspective platform RPG game, like Legend of Zelda but I felt it was way better. The Shining Force series were the Sega version of the FF games I think... Not sure since I've never played FF. Basically your sprites were tiny little blocky people and all walked together in a line behind you as you picked up team meats. All the illustrations were a little chibi... I loved that style of RPG. The retro versions on phones don't have the same 8bit or 16bit charm anymore. The comic A Modest Destiny was inspired by those which is why I loved it back in the day http://www.squidi.net/comic/index.php

I grew up playing these. Final Fantasy 7,8, and 9 were by far the best. The character development and captivating storyline triumphs everytime! These games are what inspired me to draw as I was growing up. Playstation 4 just re-released Final Fantasy 9 into their playstation store with revamped high definition graphics so.....you can play FF9 with beautiful graphics. 7 is in the store too. Final Fantasy XIII was horrible!! Dont get me wrong, it had gorgeous graphics but the plot was horrible and misleading. The character Lightning was the only great character design the other characters were too bizarre or unrealistic in their own weird way. A great game that just came out that has an INCREDIBLE story is "Nier:Automata". I just finished it and the story kept me on the edge of my seat the whole time I played. The characters 9s and 2B are so well done! Earth is taken over by robots and man has fled to the moon. They send androids to earth to fight the robots and win earth back.

Both graphics and story should work together to create something great. Though often my problem with voice acting is that sometimes It's hard for me to treat a character like a character when hes/shes voiced by a voice actor i know or is everywhere to the point I can't not know him/her. That's why one of my most favorite dubs in video games is Silent Hill 3. Not only performences are eeriee and characteristic, I don't know any of the voice actors so I can treat them as part of the characters.

I agree in that less defined art often seems to be more interesting; to have more 'charm'! Southpark wouldn't be nearly as funny of a show if the art was more refined!!

I am all about writing and good voice acting when it comes to video games. As long as the game mechanics are playable, we're good. Although truth is, most well-written games these days also have beautiful graphics. Gameplay is hit-or-miss though. Bioshock Infinite has fantastic writing, and I was immersed in a game called Murdered. Deus Ex is very good too. On the surface, it seems like a generic protagonist in a generic story, but it is acted and written solidly. (I can't get into FF plots. They are so conuluted. I enjoy the Tales series jrpgs, which are equally convoluted but brighter, simpler art and more endearing characters.)

Well, for me it's always "Character Development". :-)