Daredevil Season 3 Review and the end of Netflix Marvel 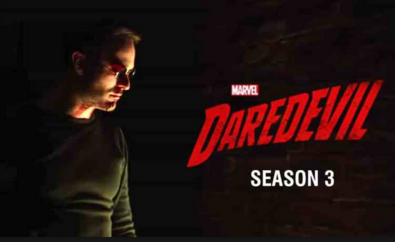 Since I've reviewed both other seasons of Daredevil, I figured I'd talk about the Third - and last ? - season and then chat a tiny bit about the sudden cancelling of the series and the rest of the “Netflix Marvel Universe”.

It was excellent. I understand that the second season got some bad or mixed reviews - I loved it. But Season Three was even better. Knowing these characters so well at this point is a real treat. And the Third outing is the time for things to get very difficult for Daredevil and company.

We get a deeper look at Matt's past and where he came from. I'll avoid spoilers there. Karen and Foggy are back, and we get a similar look at some of the mysteries of Karen's past, which I liked. She gets a whole episode in fact. The Kingpin is back, and has a huge role this season, which was awesome.

The fight scenes were great, in the eyes of a layman like me anyway, and there's a particularly fantastic one early in the season that takes place in the halls of a prison.

They kept track of the relationships that were important - I love the continued story of Karen as a reporter. Her relationship with her boss was well served and had a really nice payoff.

I liked that Daredevil was never in the red suit. A bit surprising, but he never goes back to it. He sticks with the black suit and mask from season one. The red suit doesn't work for me at all in this series. There is a story reason for the upgrade to the red suit, of course - and a story reason that he doesn't use it this season. Excellent!

SOMEONE wears the red though, and that was really cool.

My only criticisms are small nitpicks, really - the playing of the media and public opinion by Kingpin was a bit unbelievable at times. And the comparison of Kingpin to Trump got a little obvious near the end, when he literally made reference to “fake news”. I rolled my eyes there, not because of any political affiliation, but because it took me out of the story. WAY too on the nose, there.

And finally, at long last, we got to see Bullseye, who's a hugely important character in the Daredevil mythology. Just like the intro of Kingpin in Season One, the introduction of Bullseye was done brilliantly. We get an indepth look at this fascinating character - I had no idea this dude was going to be Bullseye. And I shouted out “Omigod! He's Bullseye!” at the appropriate time.

The season's ending actually serves alright as a series finale, too. But there's plenty more that could be done going forward. Things are wide open for more stories, and I really hope they pick up this series and continue it…though it won't be happening on Netflix.


The End of Netflix Marvel


Sadly, Netflix surprised those of us who follow such things with the announcement that they were cancelling Iron Fist and Luke Cage, followed by the recent announcement that the just-released hit Daredevil was cancelled as well. Jessica Jones season 3 and The Punisher season 2 are still in production, so they will be released soon - and it seems obvious that those shows will get the axe as well.

I haven't seen Iron Fist, but Luke Cage was definitely screwed over, story-wise, with its intriguing Season 2 ending.

I really liked the Punisher so I'm glad it's getting another season at least, and I loved Daredevil. The press releases from Netflix and Disney/Marvel haven't said much - basically they're thankful to the creators, cast and crews of these shows, and that they look forward to seeing more from these characters.

It's awkward, because apparently the existing seasons of these shows will remain on Netflix, while Disney Plus will be the new home for Marvel series (including any reboots or continuations of Daredevil and company).

The casting of Daredevil is pretty much perfect, and I want to see that series continue. Ditto the Punisher - perfect casting of Frank Castle. And I'd rather see them continue in the gritty series format they've started in, rather than in lighter-toned Marvel movies. I don't think these characters can be done any better than they've been done on the Netflix shows.

There's no way of knowing what's going to happen to these folks at the moment, though.

It was quite the bombshell from Netflix, and it seems as though it's a deliberate jab at Disney, who will soon be Netflix's biggest competitor in online streaming.

If you're interested in such things, there are probably thoughts on it posted all over the ‘Net. As a big fan of the Midnight’s Edge channel, it's their take that I recommend for starters:


So, have you seen Daredevil? What are your thoughts, predictions or hopes for the continuation or next iteration of the Netflix Marvel series?

Have a fine day!


p.s. If you've been enjoying Genejoke's 3D comic tutorials as much as I have, don't fear! Part 3 will be here next week!

Abt - Yeah, they may leave Daredevil alone for a few years, then do a reboot. We'll have to wait and see! Personally I loved DD, and the Punisher. They were the best in my opinion (and Daredevil really hit its stride in season 3; I agree on that!).

Thanks Vino! Yeah, I think most of the answers are buried in this long Newspost and comments somewhere, haha. No, Disney didn't buy them out - they don't have to. They already own those characters (though it's different people running the Netflix shows, not Kevin Feige). Hard to say what Disney will do next, but they are now free to use all these characters however they want as far as I know!

It's regrettable that they axed all these shows just like that. I loved the first seasons of Jessica Jones, Luke Cage and Punisher. The other stuff, as far as I've seen it, was hit and miss. Daredevil was initially somewhat of a letdown for me, and I felt it only got really good in the third season. But I'd always watch it for D'Onofrio's excellent performance alone! Still, much like live-action Batman, I don't think we've gotten the definitive version yet, so I wouldn't be opposed to a reboot, especially one closer to the MCU...

You may have answered my questions below.....hehe

Great article. I am a huge Netflix's Jessica Jones fan - Seasons 1 and 2, and I loved Luke Cage Season 1 (haven't watched Season 2...I know I know...but the first episode didn't draw me in so I thought I'd watch it later and later hasn't come yet. Never heard of Iron Fist or Punisher and Daredevil didn't make it passed 20 minutes, but I am overall sad that Netflix is ending these shows. I don't get it at all. Did Disney buy them out or something? I'm sure there is a reason...I just don't get it.

And I assumed it was Disney/Marvel wanting the shows cancelled too, but sources I respect are saying it's a Netflix decision. They don't want to pay Disney (licensing fees for the Marvel characters) and then promote the Marvel Universe for their competitors. Makes sense in a business war, maybe, but the audiences lose. We'll see what happens I s'pose...

If Disney Plus does a high-quality X-Men series, I may have to subscribe. That's the thing that will get me on board almost for sure. Anything else I don't know if I'll care that much. The series about Loki and Scarlet Witch? Not interested at all. I guess if they pick up Daredevil for season 4 that will be good - but I wouldn't subscribe to the service just for one show. Well, maybe if it's cheap enough I guess...

@cdmalcolm - I haven't watched any Disney channel stuff on TV (I do have cable TV in the house right now - not for myself, but I've watched some shows and the PVR is nice...but man, the amount of commercials is ridiculous! The stuff I watched was mostly on AMC, and it was the same type of thing you're talking about - commercials for their own shows. That makes sense of course, but when you're watching the same commercial the fourth time in an hour it's a bit much!

I think it’s a shame that Marvel/(really Disney) is cutting the series from Netflix. All because Disney wants to create their own streaming service. Everyone one wants to be like Netflix but fails in so many different ways. Hulu sucks. I don’t understand how they are still in business. Apple TV is trying so hard to be like Roku... Amazon wants to end every streaming service under the sun... Now Disney wants to add their two cents in the streaming business? Really? Most Disney channels are almost all about themselves... selfish. All they seem to show is Disney stuff or marvel stuff. Showing the same commercials over and over and over that all I feel like doing is changing the channel. All they show is commercials. Yeah I know it’s for kids but it’s horrible. I feel like they have no diversity. On other notes... I love the Marvel shows, cartoons and Movies. I’m so glad Disney still lets Marvel do their thing and I hope they don’t start interfering with Marvel’s creativity.