Tumblr seems to have recently been either bought out by a big corporate entity, courting new advertisers, or both and as a consequence the adult images that were the ONLY thing that made it special and differentiated it from all the other millions of image hosting sites are not welcome anymore. As of the 18th of December anyone who is hosting “adult” content has to GTFO of Tumblr. You guys who hosted your work there and brought them millions of visitors are no longer wanted. You made it as a site and now you're not needed.
Various rationales to do with people posting illegal porn content have been floated as the reasons for this but those are pretty easy to see through. 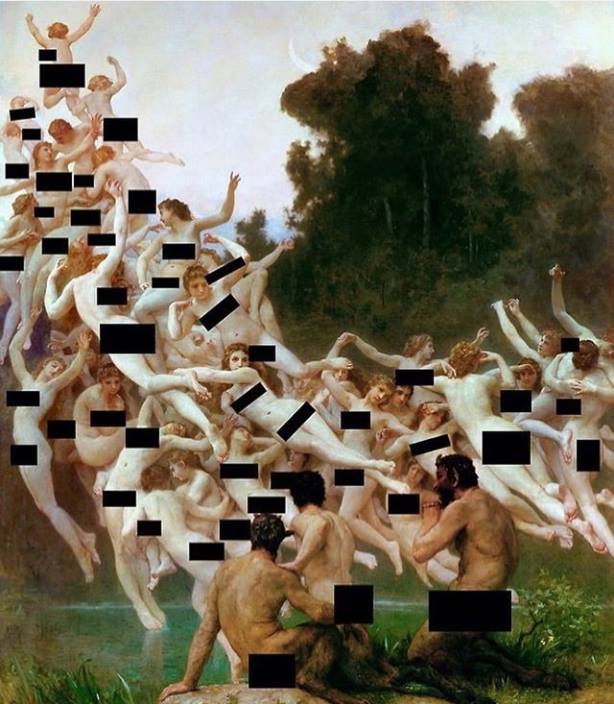 Now that's out of the way let's talk about the broader issue of censorship, especially how it pertains to the internet.

For many years the internet was an extremely free place, a sort of wild west with everything available. Various governments have moved to limit that but it never really worked. What HAS worked is corporate control as the internet is now controlled by fewer and fewer tech behemoths. The giants of Apple, Google and Facebook now control a colossal amount of web traffic between them and they've successfully contrived to limit the amount of “adult” material that is available to people. There is still just as much material out there as ever there was and more every day, but in the ways that people normally use the net now (goggle searches, Youtube, phone aps etc), it's increasingly unavailable. We're not just talking about porn here but ANY expression of normal adult sexuality from health to art, to entertainment, to education!

The counter argument is as it has always been: “Won't somebody think of the children!”
It's emotive, there seems to be logic behind it, the idea of “protecting” children is a powerful one! And if a few hundred million innocents posting about art, health and sexuality get caught up in the crusade against porn… well so be it! That's just the price you have to pay to “protect” the children.
But let's just have a closer look at that idea shall we?
The USA is the best example because it contains the largest single population of English speakers. Only 22.6% of the population is under 18 years of age, meaning you're actively treating the vast majority of your population like children for the sake of that minority. (https://www.census.gov/quickfacts/fact/table/US/PST045217)

Let's unpack that further…
I'd argue that people who're at at least 15 are perfectly able to handle images of nudity and understand sexuality, especially in terms of art, health, and entertainment. That fits in with guidelines world wide for the ratings on such material. Unfortunately I don't know the exact percentage. There are also children under 5 who make up 6.1 % of the population who're too young to use technology without supervision and wouldn't be able to find or understand that material anyway. This means that the true amount of “children” who we're bowdlerising the internet for probably make up less than 14% of the whole population! (subtracting those under 5 and a guess at those between 15 and 18)
Also, keep in mind that these children are the responsibility of their parents and guardians who are far better placed to control their internet access than anyone else, and many internet services either preclude the use by people under a certain age (Facebook), or have age restrictions in pace (YouTube). So the move to censor the internet has absolutely zero basis in real world logic.

So what is the true reason for the crusade against adult sexuality on the internet?
It's quite hard to untangle where this bizarre, almost perverted policy comes from. For a start we have old ingrained socially conservative taboos against nudity that are cultural. There's an idea that those are based in Christianity, but this is wrong: Most of the world's cultures have a weird dual nature where sexuality is open and permissible on one hand and banned and hidden on the other. Look at the history, art, literature and artefacts of any culture and you'll see examples of both extremes existing at the same time.

In the present day there have been initiatives like the “protect the children act”, “anti-trafficking* and anti-porn crusades; all misguided patriarchal initiatives promoted by left and rightwing groups equally, for their own reasons, but the results are the same.
As far as I can see the motive is ”control“, using emotive ideas like ”protection“ and tapping into historical taboos in order to gain legitimacy for the idea. But ”control“ for what motive? The answer is ”for its own sake" because having a handle on something makes it easier to use: i.e you use it as an excuse to ban and censor individuals (popular with governments), force businesses to behave in certain ways or pay for certain services (popular with Apple and Google), exclude and marginalise certain groups (punish gay people etc).
*Thank-you to Tantz for lending an insight to help with the conclusion

What are your views?

Well, I'm one of the tumblr refugees. Althogh I didn't create original content (I wish I was that creative, but I really lack imagination. And talent.), I translated a webcomic to german, because I really liked the story. But it contains pornography. Working on it for over a year now had one big effect on me. I don't see the pronography anymore. I just see wonderful art and a well written story. As soon as I heard the news about tumblr closing its doors for NSFW content, I started looking for a new place to stay. Preferably german, but in Germany there are not that many pages for webcomics, and NONE of them allows porn (casual nudity is okay though! I mean, you can see naked people in commercials for deodorant or margarine at any time of day in Germany). Looking for german webcomics brought me here, since there are/were quite a few german artists here. So thanks for the warm welcome...

Interestingly Facebook will not approve my add for this post so I am not allowed to boost it. I even asked for a review and it was rejected. It contains no nudity, swear words, racisim, incite to violence or anything. THAT certainly rubs the conspiracy organs in a rather suggestive fashion.

Exodus, more like SEXODUS! Glad DD is here for us pervs

I'm not a conspiracy theory guy, but it's at least worth floating out there that the recent U.S. anti-sex trafficking bill was just the most recent attempt to backdoor in legislation to undermine safe harbor laws online. And it seems to have worked.

I would normally be for thing like this because honestly, pornographic content doesn't belong on social media, but there are two very serious problems with the ban. Number one, it's automated when it ought to be operated by people. Number two, there's a special filter for NSFW stuff that is legal. So it is a case of good intent and a good idea being executed terribly wrong.

You're being far too rational. A single digit percentage of children are snatched in the US,(the grear majority are involved in custody battles and know their abductor) yet an entire generation lost nearly any chance to walk to school or be even be outside. Popular delusions, madness of crowds and mass hysteria is what fuels the "think of the children " cry not any rational risk assessment. My sister in law still freaks when I suggest my nephews look at my comics and they are now in their 20s!

I keep my wetter comic pages on other sites. but i am glad that duck is welcoming so i can post those pages if i choice... when I was in the heart of a story about sexuality it became a issue.. It changed how I use social media with my comics..i use to post hey new pages , chapter up notes.. but it opened up a negative dialog because people felt a need to tell me what kind of stories I was allowed to tell.. people told me I would lose my job. i could go to jail ..I was told I would be publicly shamed and it would all be to protect the children because a mind that could imagen a relationship with a transgender individual might abuse children.. or I might want to abuse woman or hate woman.. that I need to post trigger warnings.. to protect female viewers. that those wet pages effects the public health.. but its about control its fear of ink.. fear of ideas and fantasies. i am glad duck is welcoming to adult content.

I think what Hapoppo wrote - "Apple finally realized there's porn on the site and banned the [tumblr] app on the iOS store as a result" - is key in understanding the issue: companies are driven to make these pseudo-puritan decisions in order to be less vulnerable in an extremely competitive marketplace. It's pretty much the same logic by which politicians must project a puritan image to avoid scandals: just the mere possibility of constructing a scandal creates vulnerability and can lose these companies a lot of money. Of course, the basis of this situation is what in today's climate can be made to appear scandalous.

I think there are two mandates underlying the censorship of erotica: 1) control, and 2) the propagation of an ideology through public pedagogy. 1) Control: If you control a person's sexuality, you control the person. I suspect that this basic maxim was just as true in paleolithic societies as it is today. 2) Public pedagogy (in this case, defined as "how a dominant ideology can promote a particular view of things though its various means of influence: media, politics, work practices, business discourse, etc."*). By packaging the erotic as "forbidden," "taboo," "dirty," "underground, etc." the controllers of the media influence us to see our own sexuality as something negative. So, I believe censorship isn't just about literal control of access to erotica, but also a means of propagating negative cultural attitudes toward sexuality. * http://www.dictionaryofeducation.co.uk/p/p/public-pedagogy

So what I suppose also contributed here is more of a too much of a good thing kind of ordeal, where the line between what LOOKED like it was illegal and what WAS illegal was blurred beyond control. But even if this is tumblr's way of combatting any illegal content, they're also prohibitting what is supposed to be legal, and therefore making the problem worse.

Ironscarf & Ozoneocean: Very apt point you made. They ARE taking the space of the old sacerdoce.

The tech giants have become gatekeepers and curators to the knowledge and art on the internet. They should NEVER have been that but that's what they are now. They're the high priests of the world wide web. We see it THROUGH them.

Yes, control - it's always been about control. The tech giants increasingly occupy the same space as the old religions. I've noticed a few people intending to switch their stuff to twitter, but on adult content their policy seems as nebulous as Theresa May. Various other sites were mentioned, I even joined one called Mastodon, but I don't know what it's for. Whatever ever else you do, everybody should post their work here on The Duck, because THEY don't want you to!