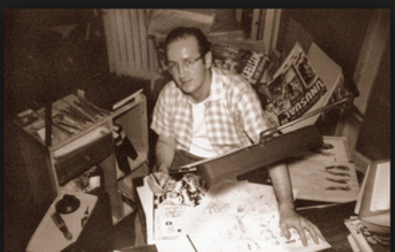 Last week, Steve Ditko passed away at the age of 90. Legend? Titan? Master? I'm not sure what kind of descriptor to use for this guy.

He was one of a very small group of people who shaped the Marvel Universe, which rocked and redefined the comics world, and decades later became the biggest thing in entertainment pop culture.

His style was an interesting contrast to Jack Kirby's - while Jack had bold, highly dramatic layouts and bombastically heroic looking characters, Steve made his bones at Marvel with the wiry, acrobatic poses of Spiderman and the Vincent Price-looking, odd hand gestures-making Doctor Strange. It's compelling stuff to look at (as were the fantastic background environments, especially in Doctor Strange), and I'm glad the early Marvel Universe had the Ditko variation in those books.

Ditko made other early contributions to the developing Marvel Universe, too - apparently the Hulk getting stronger the angrier he gets was Steve's idea. That's a very important part of the character in the comics, though it hasn't really figured into the movies yet as far as I can remember.

In his later years, before retiring, Steve would do very unique comics of his own, which fans could apparently order only by mail. That's postal-service only. No email.

What an interesting guy Steve was. He kept an extremely private life and I respect that a lot.

Rest in Peace to one of the absolute giants of the comic book industry!

And a very interesting article shared with us at the time by Abt_Nihil
http://www.vulture.com/2016/11/steve-ditko-doctor-strange-c-v-r.html

I looked up some of Ditko's stuff... I didn't know that much about him, but I knew quite a bit about what he inspired! Feels good to know the source now!! He truly was a giant in the industry!!

There was a darkness to Ditko's style that fitted Spider-man perfectly. His J. Jonah Jameson never looked angrier. I was a fan in the early years during the transition to John Romita, Sr. and I loved his treatment as well but will always have a soft spot for Ditko.

All good things come to an end... I appreciate his down to Earth side and well, at least he lived a long life. Considering all the people we lost last year and this one who's lives ended before hitting 70, he at least got to be 90. I'm sure that even in the afterlife, he's still making beautiful art.

When I first started reading comics, Spider-Man in particular it was during the John Romita Sr. era and so his style was my first impression of Spider-Man and years later I started reading the Ditko back issues and I find myself comparing their efforts with both having commendable assets to the book. Ditko handled Spidey a little better with expressive body language, facial expressions and off-beat choreography. There was more 'action' in his work while Romita had slicker inking and cleaner imagery because Ditko's work could look 'sloppy' and 'muddy' sometimes. Comparing them was like comparing Frank Frazetta to Boris Valejo. One had more expressive action in the work while the other had more striking if static imagery. Ditko's Spidey costume was inconsistently drawn as opposed to Romita's attention to detail.

I read an article about Steve Martin that said something like "He brought surrealism to the masses, but they didn't notice." (full disclosure, it was in a Penthouse magazine, which I read for the articles, but stayed for the nekkid women, since I was a teenaged boy). Steve Ditko did something similar for comics. I can't see someone like Bill Sienkiewicz finding a home at Marvel without Ditko going before him.