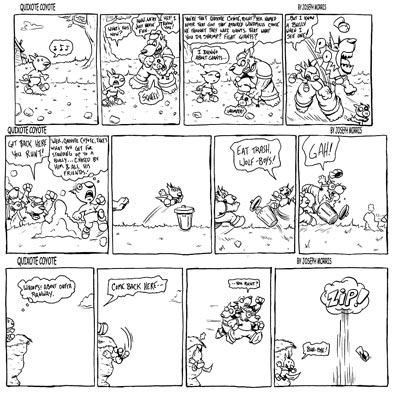 Quixote Coyote is a plucky little chap. He's almost unstoppable and certainly very likeable! He lives up to his namesake, the famous Don Quixote. He's ready to stand up for the weak and follow causes for his own chaotic reasons, getting into adventures and scrapes for the fun of it. You could almost call him “Chaotic Coyote”. Just remember to pronounce his name right! “Quixote” = “Kee-ho-tay”. Quixote Coyote is an anthro coyote who lives in a little town full of cute anthro characters and some not so cute, like the weasels and the wolves, but just watch how Quixote Coyote deals with them! This is a humour comic strip. All art is black and white line art, comically stylised and very pro looking.

Thanks for the Hype!