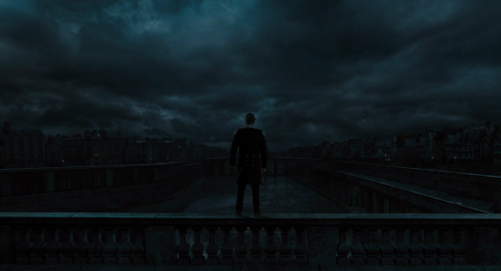 So last time we had talked about the Javert trope, a category of character that is very compelling and makes for excellent drama, immense suspense and often gets their own following in fandom. (Just check out Saito Hajime's hero's journey as a prime example.)

The Javert character is extremely hardy and preserverent but they're also very fragile in the sense that when they come to the point where they realise that they shouldn't be opposing the hero, and that they're the ones that were in the wrong (with all the crimes, bloodshed, deceit, etc that may entail) rather than the hero, they often act radically, even to end their own lives as a way of meting out punishment for themselves and aiding the hero (and copping out).

THe thing is, such a staunch character runs the risk of being melodramatic and overbearing. And unless you're going for that or want to play it for laughs, it's not something you'd want your powerful Javert character to devolve into. Some characters, when reacting to the realisation they'd been in the wrong, will commit suicide just like the namesake of the trope of Javert. Others, as I mentioned last time, will side with the hero and together with the hero fight for a better future that they also partake in. Still others will go for an ‘all of the above option’, helping the hero before somehow offing themselves with suicidal behaviors. And in the comments you also mentioned other options of helping the hero, then arresting them, and so on.

What I want to talk about is a way to decide if your Javert character is the type to commit suicide or the type to make a ‘heel face turn’ and side with the hero (regardless of how they'll act after the big bad has been resolved). Because some personalities of characters are more prone to the former than the latter, and vice versa, and if that limit isn't respected the character may come across as less genuine.


In my opinion, two elements are the ones that will determine how prone a character is to suicide when faced with the realisation they'd been rooting and serving the wrong team/master/side: investment. How much of their own selves and existence have they connected to their ‘cause’ and their ‘side’? Does it define who they are, their identity? Do they live and breathe to be a personification of whatever it is they think the particular side represents? If so, when forced to realise that they were wrong, it feels as if their entire personality is negated and their identity fraudulent and non existent. Such a character is more likely to commit suicide, as the sheer effort to rebuild an identity and find something else to believe in is too overwhelming and too crushing.

On the other hand, are they very invested, but also care about other things, have other elements of identity in their life, have other people or things they depend on that can keep them from absolutely collapsing in their self-esteem and self-determination? Then it is likely that they won't do the unthinkable, even if they consider it, and will work to reshape their investment into something they can live with (aka side with the hero).

The second thing is strength of character- how strong the personality is, despite on where it is based. If the character is of a strong personality, takes initiatives and relies on his/her own self to achieve his/her goals, then it's likely that they won't kill themselves, but rather seek to rectify the situation first before they decide what to do with their own selves. If on the other hand they've reduced themselves to a pawn, receiving orders from others (even if they execute them perfectly and with astounding skill) and depending on others to tell them what to think, what to do, how to react, then it's more likely that the only thing they will resort to is quick exit from an equation that can't be resolved by taking orders.

What's your take in this? Have I forgetten anything in how to determine how a Javert character will act when confronted with his/her fallacy?

Corruption: those options were explored in the Fugitive TV series as well as the Bill Bixby Incredible Hulk series. :)

Bravo, how about one that is dedicated to hunting down those considered enemies of the Aryan race, who discovers his grandmother was of Jewish birth? One option for the Javert that I have seen is that they bring the who has been framed in . . . and the evidence of the person's innocence, for it to be logged as evidence. That bypasses the fact the Javert is not always allowed to reopen the case. Another option when the hunted is fighting an evil is to just follow behind the target, removing the evil, and the Javert can testify in favor of the hunted

Excellent essay! Same as bravo, this makes me want to create a Javert!

Yes, very much so Bravo!

Another great and well thought out essay. Makes me want to go out and create a Javert character. There have been piles of Nazi Javerts in World War II movies of both types. You know it could be argued that the original character was less a person and more a metaphor for the era of French history in Les Miserables. He could be a vestige of the legalism of the French Revolution, or the oppression of the Ancien Regime that must kill itself so a new French Republic can be born. So a Nazi Javert could be either the SS Man who has to kill himself or must die with the Reich because he realizes how much wrong was done in the war,(as in Holocaust and Hitler's SS: Portrait in Evil) or the Gestapo man who throws away his party pin and works with the Allies for a new Germany (Generation War: our Mothers, Our Fathers)