All you need is an Asshole in a Mask 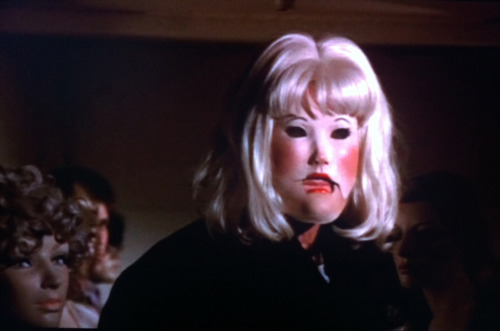 Sometimes I overcomplicate things. I do it quite a lot actually. I’m doing it right now actually as I write this. Do you know how many times I’ve change ‘as’ to ‘some’? I think about things too much. Or sometimes not enough. Anywho-

Horror movies are something I feel strongly about. When I love them, I love them. When I’m disappointed… well I don't hate it usually, but it’s just that, I’m disappointed. I tend to think of things very critically. But to that point, when something passes my critical barometer it makes me begin to love it exponentially. The more it does that isn't abrasive, the more I enjoy it. This isn't a very holistic view, admittedly. But shit doesn't have to be.

This brings me to my case study and the movie that I found myself thinking about as I enjoyed a Vedett in Camden Town’s Belgo Noord this evening (yes, that is a shout out. They’ve always been kind to me) is 1979’s ‘Tourist Trap’. It takes some things from Texas Chainsaw Massacre for sure and on that, I was prepared to label it a rip off. But it wasn’t. At least not wholly. The premise was similar and nowadays– uninspiring and tired. Early 20 year olds (they sure as shit ‘aint teens) get stuck in the backwoods and get chased by a psycho in a mask. One is ‘special’ and that’s that but the way in which the movie expressed itself kept me on. It wasn’t deep. It just had fun! The people who put this together took the standard formula and didn’t reinvent it, but they took the detailed bits— the trappings of the terror itself and what THEY may have been terrified by and integrated those things. You you know what? I enjoyed that. Absolutely.

So my point I guess is… as someone who’s been trying to precisely and concisely create art and comics to the point where it’s clogged up my synapses to malfunction… Just make something. Don’t fucking overthink it. You don’t even have to release it to the public if you're not totally sure of it. But just make something! Whether it’s on a used piece of toilet paper. It might surprise you or at the very least, you may just enjoy making it. Do you really need more than that?

But when is it time to leave well enough alone? Patience and persistence is one thing but when are you safe to consider it futile?

"So my point I guess is… as someone who’s been trying to precisely and concisely create art and comics to the point where it’s clogged up my synapses to malfunction… Just make something. " BEST.ADVICE.EVER! Really! Creators/authors must do their thing. Authors (artists, writers, colorist, etc.) fall in a spin of worry often. "Is it good enough?" Of course it is not good enough. It will never be, because the author thinks there is always something wrong. And it's good. That's the feeling that move us forward and improve. Just don't let this feeling PARALYZES you, my dear author buddy. In this life time work, embrace each season of it. I can count every single problem in my creation (narrative, plot or art), but fixing those things requires time. Guys... GUYS, be patient with yourself. ^^

@bravo - me too, kinda...stalling. I'm doing some research and study and horsing around with characters and ideas. Might be time to just jump in with pages!

I gotta see this Tourist Trap movie now, too. Actually never heard of it, I'm ashamed to say!

Very timely. I'm stuck in the land of rewrite washing garbage so this really resonates.

This is very, very good advice!! And now I gotta see Tourist Trap!!

Excellent advice - preparing a story/characters does take some doing, but at a certain point, it's being overthought. I know from putting bands together, that some work is required to get going but at a certain point you have to get out of the basement and put the thing on stage. That's how you really get things working. It applies to a band and to comics!

"Behind the Mask: The Rise of Leslie Vernon", this was a movie that I thought did a good job of deconstructing the 'slasher icon'.

Looks better than his real face XD The thing is that sometimes you just need to throw caution to the wind and DO IT! Make your project! Don't worry that it's not going to be absolutely perfect. If you never try and never make a start, nothing will happen!