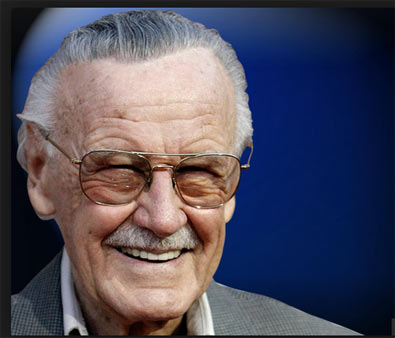 
No, of course, ‘nuff can likely never be said about this man and the body of work he’s left behind for us.

It's been a rough couple days for comic fans. I must admit, I've been a bit of a wreck every time I think about it.

He's known now as the cameo guy in all the Marvel movies these days, but Stan was the writer and co-creator of the Marvel characters, starting with Fantastic Four #1, released in 1961. He was also the editor and publisher of Marvel in its formative years. He and his collaborators created the Marvel Universe, the biggest and greatest thing in comics, and now the dominant movie phenomenon in the world.

The Hulk was my favorite character in my early comic-reading days, along with the original X-Men. I loved the characters, with the iconic costumes by Jack Kirby, but I really loved the dialogue. There was a great sense of fun and silliness to the dialogue. And a lot of it was quite verbose.

Those comics expanded my vocabulary … voluminously.

I remember him from his essays in my monthly comics - Stan's soapbox. He was funny and warm in his writing - the same way he came across live.

He was also the voice of the animated shows I watched as a kid - he introduced episodes of ‘Spider Man and his Amazing Friends’ and ‘The Incredible Hulk’ (“his skin is green and man, he's mean!”)

Stan is also credited with changing the approach to superhero characters: he gave them human foibles, angst, and internal struggles. The Fantastic Four bickered and fought among themselves. Spider Man had money problems, dating problems, and struggled with reconciling his normal life with his costumed one. Thor and Iron Man and the Hulk - they pretty much ALL had internal struggles as well as fights with bad guys. It changed the comic industry completely and permanently.

He became the Ambassador for Marvel - and for comics in general, really. His presence in the Marvel movies gave them legitimacy with the fans. Very smart of the filmmakers and producers to bring Stan on board! He was the ultimate salesman, and I mean that in the best way.

His favorite character was Spider Man, and actually when the first big budget Spidey movie was being made by Sam Raimi, Stan lobbied to play the gruff J. Johah Jameson (I think the character was actually based on Stan). He didn't get to play Jonah, But did cameo, of course, in all the Marvel movies (at least I think he's in all of them).

You know, we use big adjectives too freely I think. Genius. Legend. Icon. There are very few who reach the level of Stan Lee, though. We need a new word for people of that stature. This is a guy on the level of Walt Disney. And for me, Stan is the greater.

He had an extraordinary run, as far as longevity and especially in the body of work and legacy he gave the world. Marvel comics were a defining part of my childhood and teenagehood - and with the Marvel movies now the biggest cultural mainstream force there is - well, Stan the Man will live on for many many years.

In tribute to this great man, I'm going to read some comics. And then watch one of the Marvel movies that owe their existence to Stan Lee.

There are a LOT to choose from.

It's a massive loss to the comics world - let's face it, it's the biggest loss there is.

There was no such thing as a comic shop when I started reading Stan the Man. Every month I'd head into the local candy shop eager to see what he and Jack had in store for the Fantastic Four. I was a kid eager to do stuff like that. If it weren't for Stan and Jack I'd probably be an electrical engineer leading a boring life of not having to worry about paying the rent. Instead, I have the word "Excelsior" in my vocabulary.

Life is short, but art is forever, as they say. Stan had a long life, but it still holds true. He was a hero in his own right to all of us, and especially in times when mainstream comic publishers seem to put less and less emphasis on quality he'll be sorely missed.

What a beautiful, beautiful note written in memoriam. I have not been reading a lot of the press releases, but Banes, this is a real nice piece dedicated to the father of Marvel.

Stan Lee is a major icon. My mouth dropped Monday when I got the News notification on my phone. It was like unreal to me. To think, just a few months ago he was here in Orlando Mega Con. Our hearts are heavy. Thank you for bringing the great stories and artist who knew how to draw your and other creators vision. P.S. I love the interviews you gave with some of the best artist in the industry. Rest In Peace.

You had a good run Stan. You are responsible for the majority of our modern pantheon. You will be remembered longer than most (if not all) people alive today.

He had a full life and he won't completely vanish. I read they filmed his next 10 cameos already ^_^

thanks for those stories, meemjar, and your excellent tribute!

I hope its OK to show the tribute I did for Stan on my site here. https://www.theduckwebcomics.com/The_Dragon_Fists_of_Smorty_Smythe/

I had the pleasure of meeting Stan twice when he visited Calgary years ago. The first time I said to him; "Stan, at my age I can honestly tell you that I was reading Spider-Man back when you and John Romita were still writing and drawing him." "He replied; "Well, its nice to know you're still with us." Our second meeting was like this. I said to him; "Many people compare you to Walt Disney, because of the level of notoriety you have. But When I look at Disney's universe with its wholesome, clean-cut black & white view, its more comparable to the DC Universe during the Silver age. Whereas, your universe with its shades of grey, its subversive humor and satirical wit and flawed heroes and sympathetic villains, I think you're more comparable to Chuck Jones and Friz Freleng who created Bugs Bunny and the Looney Tunes." He roared with laughter and said; "I'm VERY flattered!"

Jaymonrising - Dats of Future Past is my favourite X Men movie, too

May your soul Rest In Peace. Your imagination and creativity will leave on within the rest of us.

What a great imagination. He reinvented the superhero comic genre. Actually have bound collections of the early 1960s stuff.

I'm for sure going to miss him. To me his defining cameo was in the first Avengers movie. After that he didn't have to cameo in any other Marvel film (seeing as he didn't in Days of Future Past despite it being my fave XMen film) unless he wanted to since he had already cemented himself for me after phase one of the MCU. He was a cheerful guy who was already a big deal yet, like Scorcese or Jodorowsky, found a way to make the most of his time (he even wrote a manga: Karakuridoji Ultimo, which he's as far as the villain, I think). So yeah, Exelsior!