Quackcast 401 - Stan Lee, a stupid comedian, and the new prudes 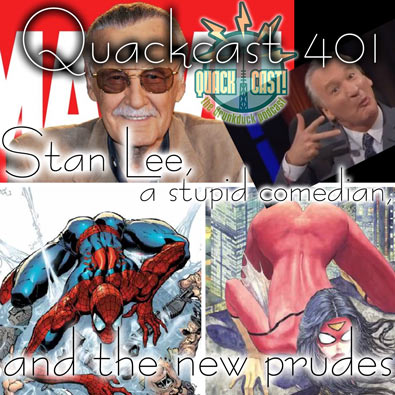 LISTEN on our new player!
Listen on Stitcher ​​- https://www.stitcher.com/s?fid=224306&refid=stpr
Or TuneinRadio - https://tunein.com/podcasts/Books–Literature/Drunkduck-Quackcast-p1150194/

This is Quackcast 401! Error, error! Pitface and Tantz were absent so Banes and myself were left to go quietly off the rails and expostulate all sorts of radical, half formed, badly articulated thoughts. This is an interesting one! We cover the death of the great Stan Lee, titan of the comics and superhero world. Then we sidestream into talking about comedians trying to be political commentators (re: Bill Maher)… I must apologise for my Ad Hominems. And lastly our focus is on a “new puritanism” in some aspects of pop-culture. It all ties together, if a little awkwardly.

Stan Lee was instrumental in creating a unified fantasy universe populated by a pantheon of godlike superheroes with very human thoughts and failings. Not only that but he helped elevate comics as a medium to the mainstream. No longer are comics seen as something just for children. Cartoons, fantasy, Scifi, and comics have been rightfully elevated to the mainstream where they belong as valid forms of artistic expression. People no longer have to apologise for or feel ashamed of liking them either. You're free to consume or create the media of your choice and Stan Lee was a massive part of that.

This is why the remarks by Mr Maher about Stan Lee are problematic and ill-judged. He said that the veneration shown for a creator of comics, which are “only meant for children”, shows how the US has been dumbed down and why someone like Donald Trump could have been elected.
I'd contend that the reason for “Trump” and people's idea of politics being dumbed down is that we now get most of our political commentary through comedians. They have helped turn complex subjects into simplistic black and white caricatures because that's how comedy works. It's great for breaking down ideas and giving you a simple primer to understand them, but when comedians and partisan talking heads are your main sources then things are going very, very wrong. Bill Maher IS the problem, not people liking comics. If anything, Stan Lee worked to do the opposite; his characters weren't simple 2D cut-outs (like Maher's version of political figures), they were complicated and human. These were A-political characters who strived to do what was right outside of mere party affiliations.

Then we transition into my idea of the “new puritans”.
There's a slow tide of people coming out against sexuality in art. It comes from both the left and right so there's no real political platform. I feel it's very much related to the same point of view that Bill Maher has about comics: this is media for children and we must protect them from anything grown up. When in reality all we end up doing is insulting and infantilising adults when we attack sexuality in media, whether in games, cartoons, books, comics or movies.
This is no more clearly shown than in the word these people use most often: “Sexualise”
They claim that characters are “sexualised”. You cannot sexualise an adult or teen. By biological, physical definition we are ALL sexual past puberty. That doesn't mean we have or even want sex, it means we have sexual traits and that's all it means. You can “sexualise” a non-sexual thing like a toaster or a car but it's impossible to do that to a teen or adult. Sexual traits in adult characters are healthy and normal. I contend that the need to remove them is a perversion.

This week Gunwallace has given us the theme to Quixote Coyote… Let’s get a little chaotic with this quixotic jazz jam for Quixote Coyote! Let the organs fill your body (no, not those sorts of organs), let the drums be your heartbeat, and the trumpet will chase the electric, eclectic thoughts in your brain.

VIDEO exclusive!
Only for Patrons who donate $5 or more, here:
https://www.patreon.com/DrunkDuck

I'm saying that are though. Initially they called out the correct things but then like a lot of movements, people who were more ignorant or had different motives joined in, co-opted it, and now they tend to attack everything.

Generally these people are ignorant and they do more harm than good. Amelius lists a few examples on the actual Quackcast post here: https://www.theduckwebcomics.com/quackcast/episode-401-stan-lee-a-stupid-comedian-and-the-new-prudes

My main point on that particular topic is that people are approaching it completely the wrong way and the absolutely incorrect use of the term "sexualsation" is at the heart of the issue. "the protagonist has overly emphasized sexual characteristics" that is NOT sexualisation but it CAN be eroticism and THAT is the problem. Large breasts of wide hips or big pecks and abs are fine in art and should not be "called out" unless they are depicted in an erotic way in a context or market when they should not be. But because of the mistaken use of the term "sexualisation" people tend to go after any normal adult sexual trait or skimpy clothes or whatever without considering the context. It's like going after swastika symbols and destroying them wherever you find them, regardless if they're on Nazi memorabilia, the floor tiles of a 2000 year old Roman villa, the sign on a modern Indonesian bakery whatever.

When people talk about sexualization (in this context), they tend to mean an emphasis of sexual traits. If the only difference between two comics is that in one, the protagonist has overly emphasized sexual characteristics, then that is typically called "sexualization". I'm not sure if you mean that the term is used wrongly in these cases, or whether people are wrong in calling this kind of thing out. As for me, I'm not talking about the terminological problem at all. What I'm saying is: People are not generally wrong in calling this kind of thing out. Namely, there are cases in which such emphasis is tied to a discrimination of social groups.

Fair enough. But again, "sexualisation" is completely the wrong issue and term, which is why there's a much bigger problem.

@Oz: Sorry, that "high literature" bit wasn't aimed at you, I just meant that mainstream comics shouldn't have anything to prove. There IS of course high literature to be found among comics, but what I meant was that there is nothing wrong with comics which set their bar lower than that. I don't think Stan Lee was a great "auteur" or anything, but he obviously achieved a lot for the medium. And no, I don't think there's anything wrong with sexualization per se, but you can of course take issues with instances of sexualization, or general tendencies in sexualization, which are tied to discrimination, stereotyping of social or gender groups and bullying.

@Mks Monsters: that is so! And it has been a problem in many cases unfortunately. Female characters with breasts have been demonised... Now in some cases that criticism is highly appropriate: Say the character is based on an animal, like they're a reptilian alien for example, human sexual traits are simply not appropriate at all. Equally in the character is a child. For abstract representations of humans (like in Steven Universe or Bojack Horseman for example) it's up to the creators really, but like you say it's good if we don't mandate either way.

@Jaymon, what are you referring to about Cleveland?

I think our society has taken the whole sexual thing in one direction or the other instead of finding a healthy middle ground. We either over emphasise sexual traits or we make everything look genderless. Now don't get me wrong, there's nothing wrong with genderless looking characters as non-binary people should be represented in the media, but... making everyone look the same to avoid discrimination is not a good idea.

The biggest issue with sexuality in America is that men aren't as used to it (nor even acknowledged when they're harrassed or even the damn r word in some cases) since they're mostly idealized into oblivion because of two major events which really destroyed the nation since then: 1. That horrifying incident in Cleveland in 2013. 2. The whole Weinstein fiasco. Trust me, it's been a post-apocalyptic wasteland since then if you knew what I knew. :(

And that's my rant for today. Tune in next time~

These days, vicious, horrendous attacks and bullying are regularly perpetrated online in the name of bringing back good old-fashioned sexual stereotypes, or keeping SWJs in line, and so on. Therefore, it would be irresponsible to just paint those who criticize those stereotypes as simple "puritans". But in the end, the solution is not to remove sexualization, but rather to remove the viciousness, and the discrimination and social stigma that often comes with it.

Again, I agree on some of what you say about sexualization. Sexuality is an integral part of human life, and it would be hypocritical to either expect art to either act as if it weren't, or to not indulge in the fun aspects of it. Just as comics aren't justified by being "high literature", so the depiction of sexual aspects isn't justified by being morally or politically correct. There's nothing wrong with escapism and fun in general. However! Sexual depictions can be degrading, thoughtless, or downright vicious, and so it isn't fair to outrightly condemn anyone speaking out against some sexualizations - they may have a good point! That point can't be to abolish cheesecake, but perhaps to think about our social standards, which are still largely skewed, and even under attack by, well, Trumpians and the like.

However, blaming comedians for Trump isn't fair either. I guess you can blame *some* comedians, the same way you could blame *some* comic writers/artists. I know enough comedians who have elevated the form and contributed more to making people smarter by educating them about politics, or just by entertaining deepp thoughts in general. Who's really to blame about Trump? No simple answers here, but in the end, a lot of people are responsible, and ultimately, it's the voters.

Whew, heavy topics! Well, I guess we can all agree on Maher's being wrong. Beyond that, I don't agree on everything you write here, but given how controversial all of this is, I guess you can't expect me to ;) Just some comments off the top of my head: I think Stan Lee contributed to enriching the entertainment industry, and the stories made either by him or because of him are certainly valuable. As far as I'm aware, they are not high literature, but it would be extremely hypocritical for anyone to criticize them for it. It may not be absolutely true - as there ARE many comics with depth, or which contribute to educating or enlightening their readers - but even then, making great immersive stories, advancing a popular American art form and entertaining people has enough merits. It certainly has nothing to do with dumbing people down, and even less with enabling Trump.