The Double Edged Sword of Stereotyping 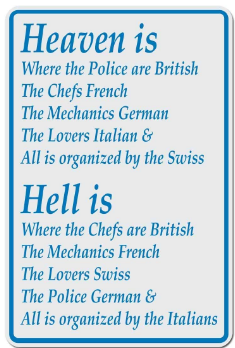 Stereotypes permeate our every day lives. Whether we like it or not, our brains are wired for making quick estimations and judgments based on patterns and pattern recognition.

This very pattern we're looking for to identify at a glance is what a stereotype is. And it's very useful for survival, has been since we were nomads and not the top of the food chain all the time.

So in a sense, it's unfair to vilify stereotyping and stereotypes since they serve a very real purpose- to help us quickly estimate a situation so we can decide on the course of action.

In modern society however, this vital mechanism can also lead to very sinister social problems based on malevolent or malicious stereotyping designed to keep social groups segregated from each other and unable to assimilate with each other while at the same time maintaining a fabricated power structure that is based on exploitation and subjugation in order to yield benefits for whoever is its primary recipient.

And yet at the same time, not all stereotypes are malevolently disseminated. Some stem from genuine characteristics found in a high percentage (or on the average) within the population the stereotype is about.

So, for example, the stereotype that Greeks are loud and gesticulate like they all direct airplanes to land is actually valid. It doesn't stem from anything malicious- it's just how we tend to be within our culture and our country. It isn't offensive and it's not a value judgment. It's just a trait you're very likely to find in Greeks of all shapes and sizes.

However the stereotype that Greeks are lazy and unethical is grossly inaccurate, and was purposefully disseminated in the beginning of the Greek crisis and the whole imposition of outside control in the country, in order to justify to the international public opinion not only the plight that had befallen us, but also that we deserved punishment and to go through everything we're going through without the need for proper (and unwanted) accountability for the situation.

Both types of stereotyping are also reflected in art, from novels to movies to comics and webcomics, since art is a reflection of the era it was created in.

Unfortunately, the poisonous, malignant strain of stereotyping is so pervasive and toxic, that in our effort to castigate it and (correctly) ban it from our daily lives and our art, we throw the baby out with the bathwater and we tend to ban ALL stereotyping.

So much so, that our multicoloured, wondrous world of variety and cultures tends to look blander and blander and more uniformal- especially in art. The efforts of forced (as opposed to natural) variety and inclusion seems to be turning the people and places in the works of art more and more uniformal, less unique. It's as if it doesn't matter where a character is from anymore, it doesn't matter what cultural experiences he/she had growing up, there's no way for a character not to have been part of a huge range of diversity from the get go (thus robbing them of the opportunity to experience culture shock and acquire new skills and experiences based on that). It seems that culture becomes so ubiquitously standard that it doesn't matter anymore what any one character brings to the table in terms of that: it'll be the same as all the others. Their turn of phrase will be the same, their nuances and sensibilities will be the same and their manner of approach to their surroundings and the cosmos won't differ much.

And in the same token, for the audience, where the character is from has little importance (unless they belong to whichever nation is Hollywood's go-to villain) and they're unlikely to have a chance to immerse themselves in any culture and learn through art about civilizations. Everything is fused, but we're not able to understand the parts that make the fusion because we're too afraid to show a culture's, a religion's and a nation's unique characteristics in a natural, organic manner and not conflate them with their personality traits or a very uninformed version that renders them into caricatures.

Shaming writers and authors for trying to write cultures other than theirs, rather than make it so that they can experience them to the point they can transcribe them onto paper or screen is truly an indicator of the terrible risk we're running of impoverishing our very own art and our very own experiences, retreating into our assigned boxes of segregated categories of political correctness and ‘inclusion’ without cohesion in an atmosphere of terror and defensiveness.

Stereotypes are a double-edged sword. But if we abstained from learning to master everything that had sharp edges, we'd still be unable to use knives to cut our own bread.

What do you think?

Get your #Twitter_Feature by PQing me and booking your Sunday!

Don’t forget you can now advertise on DrunkDuck for just $2 in whichever ad spot you like! The money goes straight into running the site. Want to know more? Click this link here! Or, if you want to help us keep the lights on you can sponsor us on Patreon. Every bit helps us! Till next week!

The one I hate is the stereotype that we webcartoonists are lazy and never finish anyth...

Irreverant the article's point is that this period of correction is only very superficially skin deep, and as a result fails in its professed purpose. It's not a bid to stop representing minorities and groups. It's a bid to start representing them well and sincerely.

Complex and cleverly written... for a lazy, unethical Greek, Haha! I hate that stereotype too. It's awful. You know on one hand it important not to fit people into boxes, like the American Asian male stereotype: studious, nerdy, weedy, often emasculated, timid... Then you have Jason Mendoza in The Good Place who's the opposite of that and it's refreshing to see. But I agree with you, this isn't an all or nothing situation, stereotypes exist for a reason so we should explore that reason rather that pretend it never existed, and also we should not imprison people within it.

@bravo1102 Yeah, Friends is bland city. But don't forget there are also sitcoms like Seinfeld or Everybody loves Raymond or Roseanne which are the opposite of bland - stories about very specific, recognisable groups of people.

I get what you're saying about things getting more uniformal. To my mind though we're currently in a period of correction. For a long time certain groups have been underrepresented in the media and we're now making more of an effort to see that they're represented. At the moment we're playing catch up for those lost years so things will seem short-term imbalanced the other way for a while (though not when you look beyond the last few years to the overall number of characters out there). IMO, that's temporary. It's specifically a reaction to under-representation, and one that will go away when, for any given person in the audience, there's a reasonable selection of characters out there that represent them.

Another Incredibly thoughtful and relevant essay. Amazing you look at something like films and shows from the 1940s and how they showed the variety of cultures present in a neighborhood in a big city and the blandness of a show like Friends.