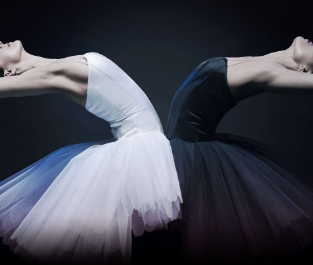 In Swan Lake, the black swan Odile is transformed by her warlock father into the white swan, Odette, and posing as Odette she tricks the prince into breaking his oath to the white swan- because clearly making life-binding oaths to a woman you know so little you can mistake her for her potential twin is a BAD IDEA.

It's a fascinating premise: the evil impostor posing as a good protagonist; the evil twin interfering in the life of the good one; the good personality getting disrupted by the evil one. We have always been thrilled and in the same time frightened by the doppelganger.

Trying hard not to make a 50 Shades joke here, what is explored often is the extent of one's limits: our best and our worst. Our highest and lowest points in any scale, any aspect of our lives. Presenting a character with their doppelganger is basically to force them to face the darkest side of their own selves.

Often, both the white swan and the black swan exist intertwined in the characters we create (provided we've graced them with a personality rather than just an archetypical trope- though even in that case there may exist nuance and struggle with oneself), and this lurking, brittle balance can be used to both propagate the plot in a story and engage the audience, communicating far more than just the sequence of events: for often, what will bring forth the white swan or the black swan in a character is circumstance.

From all the potential criminals, usually the one that does commit a crime is the one that is presented with the opportunity. The same goes for heroes, and for cowards. It's the situation that will cause a character to react to it in a manner that will not only help the plot progress but also tell a lot to the audience about who this character is.

And often the same character can be a bastard and a saint, a protector and a perpetrator, a compassionate person and a cruel one- depending on the circumstance.

And because if a character is written like this, it's not certain which of the two will surface in his/her next reaction to an upcoming situation, the white or the black swan, suspense is built and drama saturates the interactions of a novel's, a webcomic's or movie's cast.

It goes without say, too, that if the right circumstance to call a character's black swan (or white swan) doesn't arise, then it will be unlike the audience will ever witness it. It doesn't matter though- it's enough that you, the creator, knows which circumstance that is because somehow the fact that it potentially exists, just there in the background, is enough to saturate a character with nuance.

And nuance is really all it takes.

Have you had a character with this potential? If so did they display it? If not, do you know when they could have?

Get your #Twitter_Feature and promote your webcomic on the DD twitter! Book your Sunday now, PQ me!

It boils down to the interactions between motivations and morality/character. Would you steal a valuable artifact? For someone who treasures history, the answer may seem to be a resolute NO. But if there comes a new motivation, the answer changes. Would you steal a valuable artifact that would otherwise be destroyed? Suddenly, the answer is just as resolute a YES. For an antagonist, would he assist his sworn enemy? The answer isn't no. It's WHY. To save his own skin? For a great deal of money? To defeat a common threat? The trick is to keep characters in character and consider the "after effects." Is the character now forever changed by the experience? Or more resolute to return to the previous state?

I dunno. I don't see people as "black" and "white" morality, but they do each have a motivation and a set of ethics and morals they live by. I feel like most of the time, when a character acts more noble or brave or sneaky or mean than expected, it's one of two things. Either the audience and/or other characters have misread their motivations/morals (such as the case I've noticed with my readers) or it is a case of character development/change, which should be handled realistically and not just dealt out as a random twist. It doesn't need to be a permanent change either. It could simply be a moment of weakness that may even make the character stronger in his resolve to avoid slipping up again. (Makes wonderful dynamics. A character sells out his allies but repents. Now he's out to prove his loyalty while dealing with the new trust issues among the group.)

To quote a famous contemporary critic of Swan Lake: "I liked it a great deal, except for the music and the swan." :) I've never thought in terms of black and white when creating characters. To my mind it's an overused cliché that pushes the temporary suspension of disbelief a bit too far. (Except when it's clearly a parody, of course.) You won't find any character of mine ever who clearly belongs into the ranks of the "blacks" or the "whites". Back when I wrote stories instead of drawing them as comics I usually had something like "the bad vs. the even worse" going on, until I realised that was just the same old crud in a different guise. Also, I became sick of all that bleak stuff, tried to do something funny instead and found it much more to my liking. It finally allowed me to get rid of any remnants of black vs. white thinking, too: if you want your stuff to be real unadulterated fun, any of that moralising would just get in the way.

Many of my characters have contradictions to them and don't have an easy time picking a course of action. Seiko is intelligent but also emotional/bold, so whether she decides to be prudent or go "action hero" (which she sucks at but tries) is up in the air. Kaida tries to be uninvolved and detached but cares too much. And then I have an antagonist that I think of as a Long John Silver character. He's 100% self-serving. So his actions seem strange because of apparently divided loyalties (like Silver's affiliation to Hawkings and to the pirate). Ultimately, he is not conflicted but motivated by what serves himself. He stays on the winning team but really on no team at all. I'm not sure my readers have recognized this. They have cheered some of his actions as if there's "good in him." But there kinda isn't. (I suppose Fudo is a foil to him. Unpredictible but selfless and ultimately self-destructive.)

Very insightful and well presented. I feel another rewrite coming on.