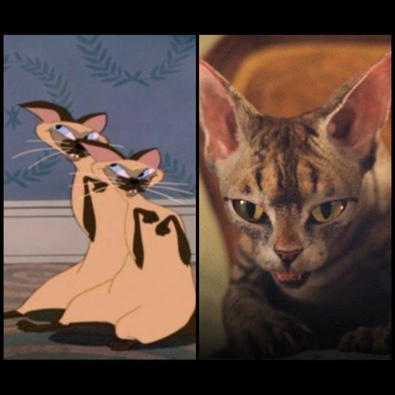 Following the release of Disney’s latest streaming device, I have had the opportunity to watch the newest live action movie of Lady and the Tramp based on the 1955 animated version of the same name. I would be remiss not to to say that I started my subscription mainly because of a morbid curiosity to see how the modern animators handled a couple of scenes in the movie.

First, one of my favorite (albeit controversial) scenes from Lady and the Tramp is when a pair of twin Siamese cats walk out of a picnic basket and begin singing the song “We Are Siamese if You Please” around the upper middle class cocker-spaniel, Lady. When I was younger, I saw the scene as Asian representation, and yes, I grew up to realize it was not perfect. In recent times, using the term Siamese (a reference to Siam, modern day Thailand) has been edited out of our vernacular. Due to the sensitive treatment of cultural stereotypes, the Lady and the Tramp love action remake has switched out the pair of Siamese cats and replaced them with two Devon Rex cats with tabby-like patterns on their back. The 1955 song “We Are Siamese if You Please” song has been gutted from the film and replaced with a brand new song “What a Shame”. When I first saw the newer updated version, I immediately turned to the 1955 version to assess if it needed to be edited or if the original was problematic. Rewatching the two versions made me rethink whether editing the original version solves all the problems associated with the original scene or brings up the problem of ignoring to discuss why the original scene was included in the first place.

So at the end of the day, while it is a step in a new direction to remake entire scenes from older movies to fit the acceptable trends in mainstream thinking , I am so glad and overjoyed that the original version of Lady and the Tramp (1955) still exists in its unedited and still controversial version because it was the one I watched as a kid. I do not believe in editing history or pretending that certain scenes did not happen. The animated Lady and the Tramp film was made during a time that Asian American civil rights were being shaken up and stereotypical depictions of Asian characters still ended up in film. It is important to be aware that it was part of mainstream thought and not ignore and bury history and replace it with newer, edited version.

Portrayals of Asian people in the old days tended to be WAY over the top and not having much relationship to reality... I's like they were based on caricatures of caricatures of caricatures...? So they come out massively exaggerated and distorted. Like the flavour of banana lollies, they were based on an older banana strain that got wiped out by disease many years ago and have not relationship to real bananas that we have now. Since then the taste has diverted and diverted from reality. -I didn't mean to use banana as a comment on the "yellow on the outside, white on the inside" smear that's thrown as western Asian people. I'm just literally talking about the way things divert from their sources.

To be honest, as a kid when I watched Lady and the Tramp, the siamese cats scene came across as hilarious rather than racist- and also written by a dog person, clearly. I can see how it can be construed as racist, but I'm not sure it was done to diss on any ethnic group. In any case before we castigate a film I'd like to know if Italians are feeling insulted first, just like I'd prefer to be asked if the stereotypes referred to Greeks, and so on.

Fan_da_Engraver - That was my experience of those movies also, and still is. And man, that whole part in the classic Dumbo, where Dumbo got drunk on champagne and you got this unapologetically bizarre, trippy sequence that both thrilled me and scared me back as a kid. I loved that stuff! It was cheer fun to watch back then and still is. And from what I've heard the remake butchered that sequence and Dumbo's fling with the booze in the old film only gets a minor wink and no drink in the new film. Cuz apparently we can't have a CGI baby elephant get lit on accident in a movie, just for the cheer fun of it. (Heavy Sigh)

It is very, VERY interesting to read about Italians and Australian portrayals in film from the United States from the perspectives of Italians and Australians abroad. Yes, the overused “Spicy Meatball” voice and trope was perpetuated from Mario Brothers and some Italian character on the Simpsons and Australian-inspired stereotypes in the USA were built on Crocodile Dundee, Tank Girl, Nicole Kidman, and Hugh Jackman.

Marcorossi - it's interesting where stereotypes come from! For Australia is was always that we wore military green shorts, and shirts, with boots and a broad brimmed hat. This was based on two things: our uniforms during WW2 and the fact that our naturalists who promoted the country internationally by showing aspects of the deserts, reefs etc also wore the same gear because it was a government uniform based on that military style. Zoo uniforms had the same lineage which is why Steve Irwin wore that. Steve Irwin has a VERY heavy accent and he was a hillbilly sort of character... so that's the basis of our sterotypes.

when I watched all those movies as a kid, it never occured to me that some characters were supposed to be some stereotypes. not at all, as a kid I could care less. I only saw talking animals (heck I loved the siamese cats as my grandma had them). and even in my adulthood I didnt see it (or that I should) untill the internet exploded with shaming old movies and pointing these out. I might be dumb or it's because of where I am from, don't know. but I still sometimes don't see them, only talking animals

I haven't actually seen any of Disney's live-action remakes, but from what I've heard about them, beside the fact that I wouldn't be interested in live-action remakes of their animated classics regardless, I find them distasteful in how they are only willing to acknowledge and make commentary on those old stereotypes they can profit from, i.e. Disney princesse tropes, but not the ones they can't, like the racial stereotypes of their past output. Instead, as it is adressed here, they just sweep those under the rug and pretend like they never happened. It's disingenuous and proves to me that Disney don't care about their legacy, or what can be discussed and/or learned from it. It's all about profitable nostalgia with a sweep of polish. It's all about HIGH rewards for NO risk now in modern Disney. Which is just sad to me.

I was also watching the live-action dumbo movie, but I think they gave all the talking parts to the humans, I did not hear Dumbo or the little mouse talk in the new version!

I think an important aspect is weather or not those stereotypical characters behave like normal characters, with their own motivation and reasoning and that the audience can see it. I guess its kind of like starting from a set archetype of character and tweaking it to be more relevant, but if you mess up i feel as though the backlash would be worse. One example is the birds from Dumbo, I really like their song and how they helped dumbo in the end and when I was growing up I knew they were stereotypical depictions of black people, but they were still fun to watch so I didn't really care to much.

In answer to your question C, I would recommend watching the anime Hetelia. Though I should warn you that the main character is anthropomorphized Northern Italy. It shows how the Japanese creators and the American dubbers viewed stereotypes. https://youtu.be/b_i-XL_fm6E

Question (segue from the other comment) Generally italian-american charachters, when dubbed in italian, are dubbed as having a really strong southern italian accent. This happens because (A) southern Italy is poorer so many migrants were from southern Italy (B) there was (and still is) a big inner migration from southern Italy to northern Italy so that the migrant charachter is most often conflated with southerners and (C) probably related to B northern Italians have the same negative stereotipes on southern Italians that other nationalities have on Italians in general. So the question is: does it happen to other countries too? how are japanese charachters dubbed in Japan, German charachters in Germany (expecially the omnipresent evil nazis) and so on? How are American characters dubbed when non-american movies are translated in english?

A marginally relevant comment, and a question: when I was a kid I also watched this movie, but since I'm italian I watched it italian dubbed. I didn't remember the fact that there is an italian restaurant scene. I remember the restaurant scene, but as a kid I didn't realize that it was specifically an italian restaurant. Thinking of it there is the famous spaghetti scene, so it makes sense that it was an italian restaurant, but since I eat pasta really often I didn't notice it. There is also the fact that I watched the movie dubbed, so even if in the original the charachters spoke with heavy italian accent, I wouldn't know. Next, the question.