Polar: From Webcomic to Film 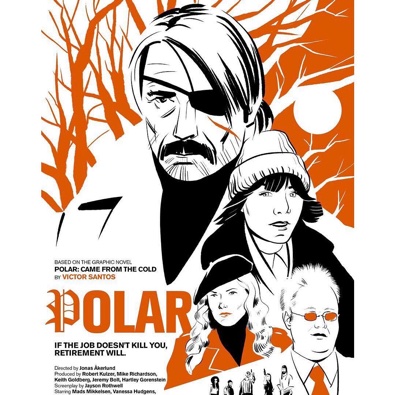 It was a Saturday night and I did not want to watched any movies in the theaters, so I decided to stream the latest release of Polar on Netflix. After the first ten minutes of gratuitous nudity, cyberpunk dressed young assassins, gorgeously dressed seasoned assassin played by Hannibal’s Mads Mikkelsen, and over the top violence, I knew it was exactly what I needed in my life. I also wondered if it was an adaptation from a comic book, manga, or anime.

After quickly looking up the back story of Polar, it turns out to be from a 2002 webcomic by Victor Santos that was quickly acquired by Dark Horse Comics and became a graphic novel in 2003. The film directed by Jonas Akerlund is the latest incarnation of a story about a hitman on the verge of retirement and all the obstacles he must face in order to collect his pension.

It is definitely a film I would recommend to people who enjoy noir films where the protagonist shows very little emotion in a variety of thrilling situations. The bad guys were also made out to be very comic-like, so the deaths that occurred were just like watching an anime.

I would definitely say that if you are a fan of Mads Mikkelsen, then watch it for Mads.

Sounds excellent! And Mads is great!

There's one scene I almost hoped John Wick would pop up. I'm sure you know the scene I mean.