Giving Mythic Scale to your Stories 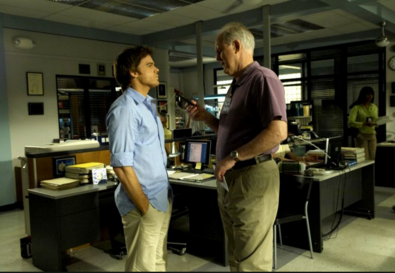 Dexter and the Trinity Killer - this may not look like an epic confrontation…but it sure as heck was!


The classic Star Wars trilogy was a phenomenon and a triumph on multiple levels. One of the things it's famous for is it's Mythic structure. George Lucas made a study of Joseph Campbell's analysis of The Hero's Journey (in fact, Campbell called Lucas the best student he'd ever had).


With scrappy, underdog heroes and powerful, sinister villains, and the Galaxy at stake, gives the trilogy a timelessness and grandiosity that are the envy of almost all cinema…including, I'd say, present day Star Wars. But I digress.


Comics have long been able to tap into this - certainly the superhero comics that captured my imagination as a kid and teen back in the day. The X-Men and other titles managed to give their stories this same feeling of of being grand Mythological tales.


Again, it helps when the Universe is being saved…


But even the smaller stories were many times able to tap into those deep feelings…into that ocean of…some kind of Universal Story. The good writers…and I give special props to Chris Claremont here…could really make it happen.


Was it the colorful, larger than life characters?
Powerful themes that weren't anviliciously trying to ‘teach’ us, but were done in the right way, so that we FELT it?
A grandiosity to the dialogue and narrative descriptions?
A sense that this story MATTERED, even the smaller-scale ones?
The use of timpani drums?


Well, yeah, probably all that and more!


The original Halloween movie had Dr. Loomis expounding in grandiose language about the horrendous evil of Michael Myers. It gave Michael…and the movie…this flavor of Mythic evil.


The show Dexter (in its good years, seasons 1-4) had this at times, too; never moreso than in season 4, when secret serial-killer-of-other-serial-killers Dexter came face to face with The Trinity Killer, who tracked Dexter to the place where he lived and worked, and invaded his home, so to speak.


How do you think stories can achieve a Mythic level? Have you ever seen it work? Seen it fail? Ever tried it yourself?


Have a fine day!

You know how acting is reacting? Well for an actor to react they need a reason to react. Something extraordinary, be it internally or externally, right? The same could be said for mythology: it's built off of a "what-if?" scenario from a fascinating universe based on proper world building. Take the first Matrix, for example: we don't know how disturbingly complex their world is until the "what if" comes in the form of taking Keanu Reeves, an average Joe like the rest of us, and introducing him to it. The same could be said for Harry Potter, My Hero Academia, or Captain America: a relatable underdog, in a world saturated with Mary Sues, who works hard to attain his dream/goal/etc.

Since usedbooks brought up the smarts behind some "dumb" comedies, the Harold and Kumar movies have been very good at turning the stupidest situations into Odyssey narratives with lots of really hilarious commentary on racial perceptions in America. As far as success or failure with mythic themes, I think it--like in so many narratives--comes down to the characters. There are a lot of movies and books that seem to get too wrapped up in the world-building and mythical qualities (the "look-at-me!" aspects of a story) that the characters are almost an afterthought and get lost in all the flashy stuff.

It's the commemoration of Isandlwhana and Roarke's Drift. The movie Zulu and Zulu Dawn featured the real numbers but the landscape is so vast you can see the edges. So you can go vast, but only if you keep that worm's eye view too. Sergei Bondarchuk was a director who was good at it as was David Lean and the Korda brothers. If the camera shows the limits of the expanse, that is the director's fault. Gotta pull in the camera just a little.

Movie magic has been filling in bits for years. I know not everything can be Gone with the Wind or Ben Hur but with CGI they're getting close. Seeing a bunch of making-of and behind the scenes it's amazing what they've filled in that I thought was real.

I'm not sure about a mythic scale, but the idea of scale in general is interesting to me. A lot of stories happen at a small scale: you have a small cast and everything happens at a couple of locations, you don't really need to go too much into what's happening in the wider world. Many stories do that and they often fail badly! Stories that try and suggest a larger scale are hard. Hollywood movies fail at this because they can't afford a million extras and locations and casts are limited, it's easy to see the "edges" and limits of the world, but the same thing happens in novels and comics: when your focus pulls out too far the world becomes a blur, so to speak.

*Rewatching (not researching) I hate autocorrect.

On that note, I just finished a researching of Beavis and Butthead Do America -- the story of a pair of morons trying to find a TV set. They end up thwarting a pair of terrorists with a biological weapon. But their conflict is the TV set. (And they are morons, so they never actually realize any other plot is going on.) Yeah, it's not really touted as a great modern classic, but the plot development and the irony and conflict are spot on.

I agree with bravo. I am quite a fan of the personal epics, the relatable crises, when it isn't a matter of billions of lives but of the wellbeing of a village, a family, or a best friend. (And even if it is some kind of global conflict, the sideplot personal conflicts are what makes the story, imo.)

I rather like it when it's not THE universe, but rather the character's universe but the creator really makes you believe it's the life, universe and everything.