Too Smart and Sensitive 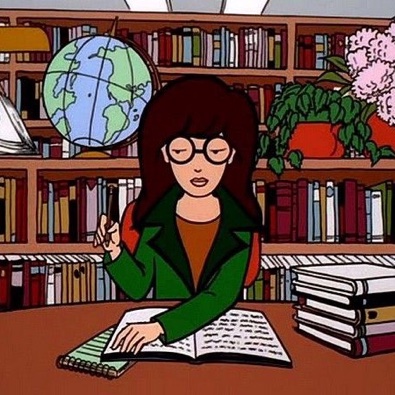 The buzz on the street is that mTV studios will be releasing a Daria reboot called Daria and Jodie along with other shows geared to an older audience like the animated Aeon Flux series. Daria was such a staple to watch in the late nineties and it helped teens in non-traditional high school groups feel like they can fit in without being brooding.

The show ended seventeen years ago this month when the main protagonist left for college. and dealt with issues like popularity, social circles in school, and social anxiety. It was a pass that let viewers know it was okay to be intelligent and into creative arts.

The art style was just as inspiring with clean colored lines that may have been produced using older methods of animation. Each time the credits rolled, it would show Daria dressed up in different period pieces or make an art historical reference.

It would be really neat if the reboot was released soon. I was a fan of the cartoon shows that were on mTV and they went away around the time music videos also stopped playing on the network all day.

With Daria it does NOT need a reboot. That show needs a live action movie of the original series or a sequel cartoon in the same style with an older Daria. A reboot is a shit idea. Aeon Flux... She was awesome as she was. Nothing topped her digital shorts... I mean the format not her outfit. The long form series was good but weaker, the movie was much weaker still. The ideas behind it did not have the same impact when they were fully fleshed out.

Don't know Daria and Judie, but I used to watch Aeon Flux.

I liked Daria when I was younger, but now as an adult, I don't care for her at all. Daria was constantly judging everyone, holding them up to ridiculous standards while she didn't really like herself at all. I guess that was the point, but most of the people who enjoyed the show may not have gotten that. Daria was miserable all the time, and she took it out on people. That's what I get out of it now.

I remember Square Pegs too! Damn!

Daria seemed to keep its quality all the way through! Like Gunwallace, I saw the whole thing later via the box set. Loved the cast of characters (a huge cast of interesting people; some of the side characters were the ones I preferred. I'd put the voice acting at the very top of the heap for cartoon series! A sequel movie or season with the same cast - I'm there! A reboot - don't care. haha.

@Bravo: Square Pegs was wonderful, although it did give us the career of Sarah Jessica Parker. Whenever I watch Star Trek II or III I'm reminded of it. As for Daria, I own the DVD box set and the specials, and really related to the sarcasm, but by that time my high school days were far behind me. Although I did work part-time in retail then, which is perhaps why it resonated so much.

Eh, I know one thing's for sure: the Daria reboot will most likely be ACTUALLY successful, unlike the Beavis and Butthead reboot.

I did not like Daria as a character. I liked the show. The humor was good, and I enjoyed the other characters and their interactions. The reason I didn't like Daria as a character was partly because people said I was "just like her," which only showed either how little they knew me or how little attention they paid to the character. She seemed hypocritical and tried too hard to not care about things. But mostly, none of her interests were my interests. If anyone said you were "like Daria," they thought it was a compliment. It actually meant, "You're awkward, wear glasses, and have no friends."

I have to admit that often at times, I identified a lot with Daria because I was a lot like her. I wasn't concerned with being cool or fashion savvy, but I was still feminine and artistic. And I was not brooding at all. I was sensitive hence my artistic side. Daria showed me that cliques are just an illusion. There's only one kind person: yourself.

Maybe they can get Kevin Smith in to do Daria meets Jay and Silent Bob. There's supposed to be a reboot of those two characters too. My generation's show was the all too brief "Square Pegs" but that had some serious goings on backstage.